Today (April 1, 2017) marked the eleventh running of the Greater Hartford Quarter Marathon.  It was super cold and windy with a generous helping of rain, sleet and snow.  Of all the races I’ve directed (we’re now up to four a year), this one was the most challenging.  To start things off, Ivy woke up Thursday morning with a very high fever.  Instead of responding to athlete emails and finishing up the baking, I was trying to soothe a seven month old and get her to the doctor.  Not ideal.  On top of that weather reports called for rain, sleet and snow on race morning, which resulted in a deluge of emails from runners. Instead of a traditional report, I thought I would take this opportunity to answer some of the questions we received over the last few days. 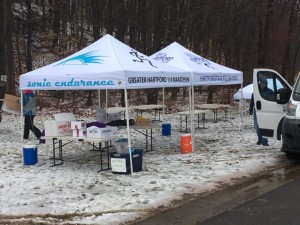 Registration set up on race morning.

A couple of caveats before I get to the questions: 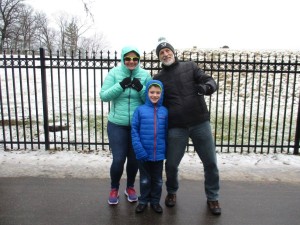 Freezing pre-race with some of our awesome volunteers.

With that being said, let’s go to the questions:

I deferred my entry to 2018 or transferred to another race. Why am I still listed as a participant with a bib number?

This is a logistical issue.  We do not remove entrants from the participant list after bibs are printed (usually in early March soon after the race sells out). This is due to the amount of data entry that is involved for entries into five different systems (our registration platform, the bib printing, the bib chips themselves, the timing platform, and our e-mail list).
We feel we offer a pretty generous transfer / deferral policy (you can defer to the next year’s race or transfer to another race we direct up until one week before race day) but given the number of complaints we have, we are strongly considering eliminating the transfer policy at all and moving to “no refunds, no transfers” as, no matter how much we try, it is apparently not good enough. 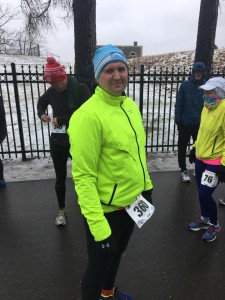 Eric looking not so happy pre-race.

The weather looks bad for race day, why don’t you reschedule?

This is a tough one.  I don’t think people realize that’s its incredibly difficult and expensive to reschedule a race.  First, we would need to get all of our permits changed.  If (and that’s a sizable if; most communities take weeks to work through the permitting process) we’re able to do this, we would need to incur significant costs.  For the Quarter Marathon, we have contracts with shuttle buses, timing and port-a-potties all tied to our race day.  We can’t just cancel the contracts; a new date would mean paying these vendors twice (a total cost of about $5,000).  Unfortunately, that’s money we just don’t have.

Additionally, myself and several of our volunteers have been baking for the race for a week.  All of our post-race food, with the exception of the bagels, are home-baked. The entire project would need to be started again if we moved the date.  Although the  cold / sleet / snow are less than ideal,  we weren’t in a position to change the date. 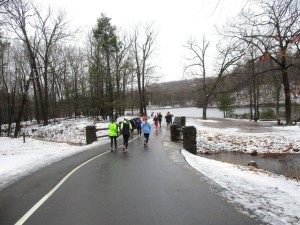 A view from the course. Thanks to Steve Mele for the photo.

Why can’t you just have the race on Sunday?

I actually received this email from a few people race morning.  In addition to all the reasons listed above, our daughter is being baptized tomorrow.  We’re willing to sacrifice a lot for our races but re-scheduling Ivy’s baptism is not one of them. 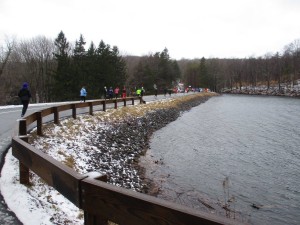 Another shot of our gorgeous course. Thanks again to Steve Mele for the picture.

What if the weather is really, really bad, like a foot of snow bad, will you cancel?

Thankfully we didn’t have to deal with this situation (we told runners we would only cancel is the MDC was closed due to the weather).  If we had to cancel we unfortunately wouldn’t be able to refund registration fees (we took in about $17,000 in registration fees and spent approximately $13,000 — I won’t have final numbers until all the receipts are in).  If we were confronted with a cancellation our plan was to: (1) hold a no race celebration sometime in the two weeks after the race where we’d have pizza and beer and runners could pick up their shirts, bibs and medals plus we’d raffle off awards and some other prizes; and (2) give all the runners 50% off any of our races including the Quarter Marathon in 2018.  The 50% discount would pretty dramatically cut our charitable donations over the next year, but I don’t think its fair for runners to carry the entire cost of having to cancel the race. 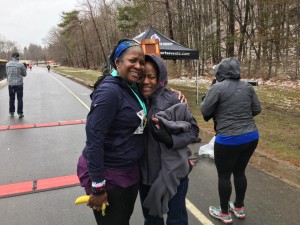 So happy to finish!

I know the race is sold out, but can’t you add just one more person?

This is obviously more of a general question and not directly related to this year, but its one we get over and over and over again.   The Quarter Marathon generally sells out about one month before race day.  Prior to it selling out, I send multiple emails to our 5,000+ person list of runners who have participated in our races over the last ten years letting them know the race will sell out. I also post at least a dozen times on Facebook about the number of slots remaining.  Despite this fact, as soon as the race sells out the emails start rolling in.

First things first, we cap the race in order to give runners the best possible experience.  Our course for the Quarter Marathon is a closed double loop course and more than 550 people on the course makes for congested running.  On top of that, we pride ourselves in giving each and every runner a great experience.  This means: every runner gets the shirt size they requested at registration; all runners have their names on their bibs; aid stations are as plentiful for the first runner as they are for the last;  we never run out of medals; there’s a huge post race spread for everyone; and that every runner feels like they’re the most important person on course.  If we expand the field, we start to lose those little details.  Obviously we could let in one more runner, the problem it is never just one more. We have to draw the line somewhere. 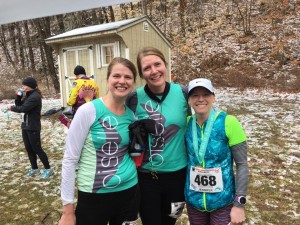 The very fast Oiselle posse at the finish.

Ryan and I love race directing.  We love giving back to running community and to charitable organizations about which we feel strongly.  We do, however, get frustrated as sometimes it feels as if no good deed goes unpunished.  Race directing is a labor of love and we’ll be back in 2018 for a hopefully warm and sunny Quarter Marathon.

Great succinct write up. Most runners do not know what is involved in directing. It is a multi faceted endeavor for which you are not paid nor do you have a staff of 20!! KUDOS to you and Ryan for all of this!!

I help run beer festivals and understand done if the logistics. It was a miserable day but a great race. Thanks for all you do!