As I sit here, I’ve officially been back to work for almost four weeks after a fourteen week maternity leave.  Our fourth trimester went by incredibly fast and its hard to believe its almost the end of 2016.  Pretty much everything in the last year has been an adjustment — being pregnant, giving birth, staying home with Ivy and now returning to work.  I thrive on routine and consistency, the last twelve months have been anything but.  Every day has become a learning experience and here’s what (I think) I’ve learned so far: 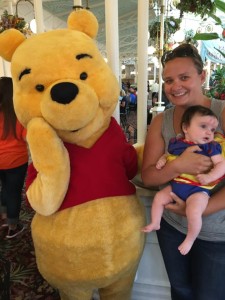 Not interested in Pooh (but still rocking my Snow White kiss).