Sitting here today it seems as if Ivy has simultaneously been here forever and arrived just yesterday.  In reality Ivy is twenty-three days old and now seems as good a time as any to tell her birth story (plus she’s happily sleeping at the moment, which helps). 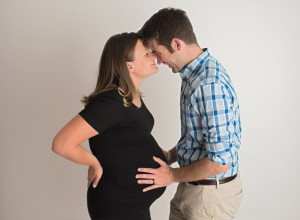 Ivy’s birth story actually begins a year ago.  As many of you may know, Ryan’s son Owen passed away soon after he was born in September of 2015.   As we progressed through the pregnancy, Owen’s birth weighed heavily on us in two major ways. First, we were concerned about pre eclampsia (Ryan was obsessive about my blood pressure) and from all the research we read we learned that the absolute safest birth for a baby was a scheduled Cesarean Section after 39 weeks gestation.  In addition, Ivy’s due date was August 29th.  Owen’s birthday is September 9th and we really wanted Owen to “have” the month of September.  Based on this, in a lot of ways we were hoping that there would be a reason to schedule a Cesarean Section.  At 34 weeks, we went in for a ultrasound to confirm Ivy’s position and to check on her size.  During the ultrasound Ivy measured at 39 weeks and the doctors projected her birth weight to be between 10 and 11 pounds.  Based on this, the doctor suggested we schedule a Cesarean Section.  We were both relieved and elated.  The next week, the doctor’s office called and scheduled us for an August 22nd delivery. 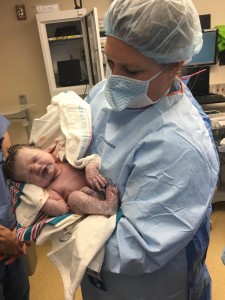 The planner in me was very happy to have a date certain for Ivy’s arrival, but the last few weeks were not fun.  Ryan and I went to our regular appointment on August 15th and the doctor informed us that I was 2 centimeters dilated and fully effaced and there was a chance I would go into labor prior to August 22nd.  The look on Ryan’s face when the doctor told us she could feel Ivy’s head was priceless.  Leaving the doctor’s office it was almost 90 degrees and the week just got hotter.  Every time I went outside I was start having contractions that would would go away as soon as I laid down and cooled off.  I felt like a prisoner in my bedroom (at the least the Olympics were on and I had something interesting to watch while I laid around and did nothing).   I really couldn’t do anything, even some easy swimming resulted in unproductive contractions.  Needless to say I was elated to make it to the morning of August 22nd. 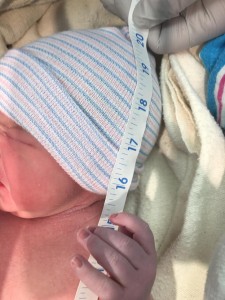 Measuring in at 20 Inches

On August 22nd I was up early, showered and in the car by 6:45 a.m. to head to Hartford Hospital (with a stop at Starbucks on the way to pick up a coffee for Ryan).  When we arrived at the hospital, we were greeted with the fact that it was the first day of a new computer system.  It took an inordinately long time for us to get registered (even through I was pre0registered and had three calls with the hospital to confirm all of our information).  Once registered we were brought to an OB Triage room where a parade of doctors and nurses visited us to check vitals, start IV lines and explain what would happen.  Just after 9:30 a.m., we were taken to the operating suite.  At that point Ryan and I were separated.  I was taken into the operating room and Ryan (and Owen Otter) were taken to a separate room to gown up for the procedure. 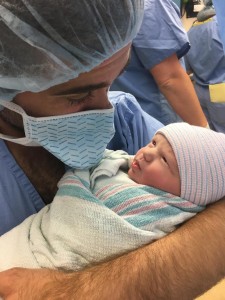 Ivy’s Introduction to Ryan (She Was Not Impressed)

Once in the operating room, my lower back was numbed and the spinal block was injected into my lower back.  I was also given medicine for low blood pressure (a side effect of the spinal block) and nausea (because, as was the case throughout my pregnancy, I was extremely nauseous as I lay on the operating table).  I started to feel a coolness extend down my entire body and within minutes I was completely numb from the chest down.  The doctors then inserted a Foley catheter and drew a curtain across my chest and Ryan was brought into the operating room with Owen Otter tucked securely inside his scrubs.  While I could feel the pressure of the doctor making a horizontal bikini incision and pushing and pulling around my abdomen, I felt absolutely no pain.   While I couldn’t see what was going on behind the curtain (it was like the Wizard of Oz), the anesthesiologist kept me informed on the progress the doctors were making and once they were about to remove Ivy from my uterus, she started taking pictures (I have a full set of pictures of the procedure but thought they might not be blog and social media appropriate).

At 10:22 a.m. finally heard Ivy’s scream as she entered the world for the first time at 7 lbs, 7 ounces and 20 inches (contrary to the ultrasound predictions, a very average sized baby).  While I wanted nothing more than to have Ryan and I hold her, Ivy’s initial APGAR score was a 5 due mostly to her poor color and respiration.  The doctors called in the pediatric response team to help out Ivy and they proceeded to remove fluid from her lungs and warm her up (its pretty normal for babies born via Cesarean Section to have excess fluid in their lungs).  At the ten minute mark, Ivy’s APGAR had increased to 8 (she was still pale and a bit blue) and the doctors kept her under the warmers for a few more minutes before bringing her over to Ryan and I.  While the pediatric team was working on Ivy, my doctors were meticulously closing me up.  By just after 11 a.m. both Ivy and I were ready to venture to the recovery room. 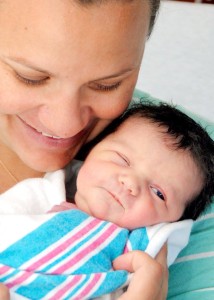 Trying to Pose for the Cameras

After the minor trauma in the operating room, when we arrived in recovery room, I was finally able to get some skin to skin contact with Ivy and to begin breastfeeding.  After feeding for a while, Ivy promptly passed out.  The nurses in the recovery room were fantastic, but the new computer system was horrible.  While Ivy and I were both ready to leave by about 12:30 p.m., computer glitches kept us in the recovery room for an additional hour.  By the time we were able to leave at 1:30 p.m. I was parched (I only got ice cubes in the recovery room) and ready for nap.  I was elated to finally be rolled out of recovery and into our “permanent” room where my parents and Shaun were waiting to meet Ivy.

While I had been warned about recovery post – Cesarean section, I actually had a really easy time.  By early evening the nurses removed my catheter and allowed me to start walking around.  Hooray!  Within twenty four hours I was able to sit up from bed without issue and to walk around while breast feeding Ivy.  While I still had (and have) way too much weight on my body, my abdominal strength and general fitness were a huge asset in the recovery process.  My biggest issue was coughing and sneezing.  Both caused quite a bit of pain to my lower abdomen.  Other than that, I didn’t experience a lot of pain and was able to stop taking narcotic painkillers less two days after surgery and to eliminate ibuprofen within a week. 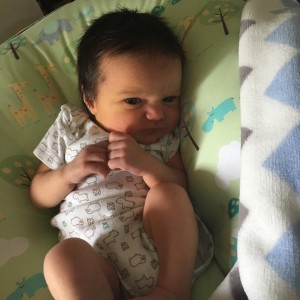 Within 24 hours in the hospital, I was starting to get restless.  All the temperature and blood pressure checks plus the constant comings and goings of doctors, nurses, CNAs, dietary, housekeeping, lactation consultants and hospital administrators was getting to be a bit much.  We were scheduled to remain in the hospital until August 26th, but we were able to leave a day early much to my delight.  Ryan and I were ecstatic to be able to leave the hospital and start life at home with our new little family.

I am so happy for all of you and even have a little something for your precious little girl!!