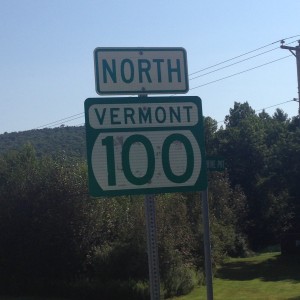 Vermont may be pretty, but its also extremely hilly.

Sometimes I get a stupid idea, a really, really, really stupid idea.  After Ragnar Cape Cod, Ryan and I were experiencing a massive post-race let down.  Ragnar had been so much fun that we wanted to race another relay again and soon.  Ryan found the 100 on 100 relay — a 100 mile relay along Route 100 in Vermont from Stowe to Ludlow (Okemo).  Not only was this a relay race race nearby, it also took place the day after Ryan’s 30th birthday so it would make for a fantastic 30th birthday present.  We decided it would be awesome to do the relay as an ultra team (3 people instead of 6) and roped Scott McMichael into joining us. 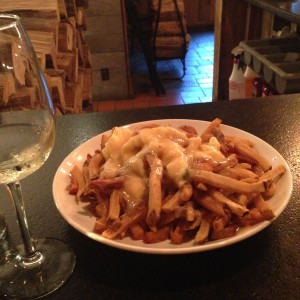 Pre-race poutine. Scott had never tried it before.

We signed up and figured we have good base, this will make for some great training mileage and will be fun.  Oh how wrong we were.  We knew Vermont was hilly, but we had no idea what we were getting ourselves into.  The race breaks down into 18 legs.  We planned on taking 6 legs each on a rotating basis — me, Ryan, Scott, repeat.  What we didn’t realize is that according to Map My Run the 100 mile course involved just under 7,000 feet of climbing.  For comparison Map My Run puts the Ironman Lake Placid Marathon at 568 feet of climbing.  Let me say it again, SEVEN THOUSAND FEET OF CLIMBING. 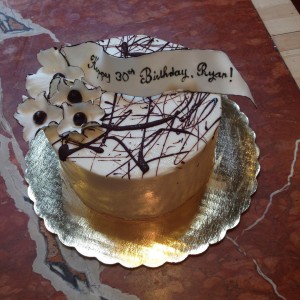 Ryan’s 30th Birthday cake. The race was a big part of his present.

Other than the massive amount of climbing, the race itself was fantastic.  I’ve participated in hundreds of races (and I race direct three of my own), and this was one of the best run/managed races I have ever seen.  Heart of Vermont Productions does an incredible job of coordinating race details and logistics.  Everything was well marked, the volunteers were super knowledgeable, there was a great swag bag, the race book was up to date and accurate and there was a great post race meal / celebration.  You could not have asked for a better experience. 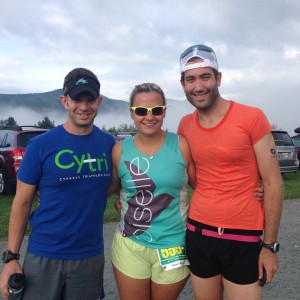 Team #BabyDucksHaveItDown at the race start.

While Heart of Vermont Productions was flawless in their execution, we were not (or rather I was not).  The morning before the race, I completely threw my neck out.  I leaned back in a chair to stretch my back and, as I did, I heard a pop and felt intense pain.  I actually yelped out loud and could not move my neck in any direction.  Not good the day before I was supposed to run 30-ish miles.  I called my massage therapist and got in for an emergency appointment.  In the meantime I slathered in the area in Primal Sport Mud, heated it up and hoped for the best.  I may (may) have thrown a temper tantrum or two on the way to my massage (and definitely was not the nicest person to Ryan). After an hour of torture, my neck felt somewhat better, but even with the massage my head felt like it was too heavy to hold up.  At that point there wasn’t a whole lot I could do.  Scott’s flight from Texas was getting in just before 1 p.m. and we needed to pick him up and head up to Vermont. 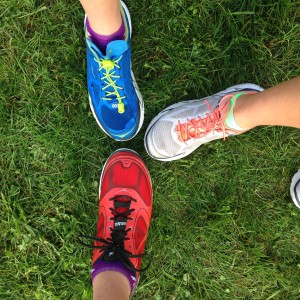 Matchy-matchy – Hoka One Ones and Swiftwick Socks.

Thankfully between the massage and painkillers I started to feel a bit better as we drove north.  We reached Stowe by late afternoon, registered and found a great place for dinner.  Scott got to experience his first ever poutine and Ryan got to order a Heady Topper.  We headed to back to the hotel early, enjoyed Ryan’s awesome birthday cake and got to sleep as soon as possible knowing that Saturday would be a very long day.  Saturday morning we were up early, found coffee and headed to the Trapp Family Lodge for the start of the race (as an aside, if you ever visit the lodge there are lots of animals, they are all behind thing wire fences, these fences are electric — not that I found out from personal experience or anything).  Our start time was 8:30 a.m. putting us at the very end of the rolling start (retrospectively this was not a good thing).  After some short directions from the race director, we were off. 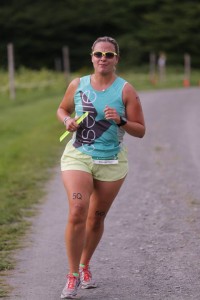 This sums up how I felt about all the hills.

I had a the very first leg and it was all trail. Not nice wide, wood chipped trail, but actual single track with switchbacks trail.  Not my forte.  I spent most of the very short leg swearing to myself and cursing the never ending series of steep uphills and steep down hills before finally handing the baton off to Ryan for his first leg.  While watching Ryan and Scott run their first legs, we pretty quickly noticed: (1) all the terrain was incredibly hilly; and (2) that everyone around us was really fast and that we were essentially getting spit out the back of the race.  As I started my second leg (4 miles straight uphill – for a total of 700-ish feet of elevation gain– followed by two miles straight down hill) it became clear that there was no way we were going to keep up with those around us.

See those mountains in the background, yeah we ran over them.

By the time Scott was on his second leg, we realized that we were going to need to skip ahead in order to avoid getting pulled or getting ordered to jump ahead.  At the handoff between legs 6 and 7 we informed the volunteers and race director that we were going to skip ahead and drove up to leg 10.  At leg 10 we checked back in and informed those volunteers about what we had done.  At that point we had found our people.  Rather than getting flown by like we were standing still, we were finally running with others about the same pace.  For the first time not only were we getting passed, we were actually passing others. 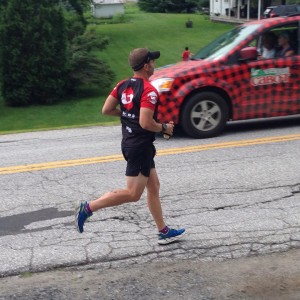 It was great to be running in the right spot (we should have started about an hour earlier), however the running itself was still brutal. It didn’t help that the heat was on; we went through 5+ gallons of Skratch Labs Lemon Lime and Mango Hyper Hydration in the 85 degree sun.  After fairly flat third legs, all three of us had ridiculous fourth legs.  My fourth leg was a straight 6.5 uphill run to Killington.  It was by far the hardest run I have ever done in my life — 6.5 miles, 900 feet of climbing, no flats or downhills, just straight up.  As the miles ticked by, the grade became steeper and steeper.  To top it off, a thunderstorm passed through during my run. In addition to crazy elevation gain, I dealt with thunder, lightening and downpours.  While the run was brutal, it also gave me a ton of confidence.  I was able to run steady miles over crazy terrain and passed more people on this leg than on any other in the race.  If nothing else, I’m a grinder. 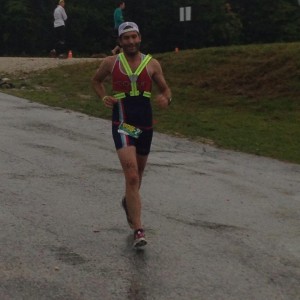 Ryan finishing up at Ramshead at Killington.

I felt really good finishing my leg, but as soon as we got to car, I started to feel off.  My neck was throbbing and the pain was running down the entire right side of my body.  Ryan and Scott’s next legs went quickly (Ryan’s was 3 miles up to Ramshead and Scott’s was a brutal, but fast, descent down the back side of Killington).  As I headed out on my last leg I knew something was not right.  My entire body was seized up and I couldn’t get the pain under control.  Not good.  The boys met me about half way into the run and as soon as I saw them I started crying.  I was in so much pain.  Scott was beyond awesome and volunteered to finish up my leg.  That let me me change, take some ibuprofen and lay down until I got the pain under control. 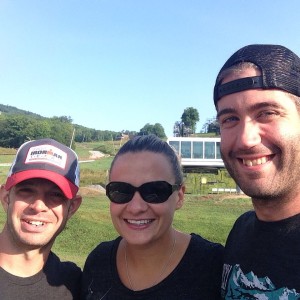 The day after (at the base of Okemo).

Scott finished my leg up strong and Ryan took off on his final leg.  Despite super tired legs and dirt roads, Ryan’s final 5 miles flew by and he handed off to Scott for the final leg to Okemo.  Scott ran into the finish at about 9:45 p.m. and the three of us were completely and utterly exhausted.  I have never hurt so much in my entire life. Despite being sore, the three of us had zero blisters or foot problems to speak of; kudos to Hoka One One and Swiftwick for at least keeping our feet in good shape. We grabbed post-race food and quickly decided that all we really wanted was to shower and sleep.  We got to out hotel just before 11 p.m., took quick showers and passed out.  The next morning all three of us were hurting badly but it helped to get brunch at Simon Pearce.  Bloody Marys and excellent rose make everything better. 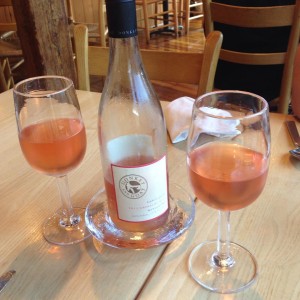 While this is probably the toughest race any of us have ever run, its definitely one we’ll do again (we’re planning on running in 2016).  In some ways I think that this is a race that can really only be done by 6 people, but in others I want to get my running mileage up, runs tons of hills and see if we can really conquer it with three people next year.  Now that we know what we’re getting ourselves into, we can prepare to kick its ass.