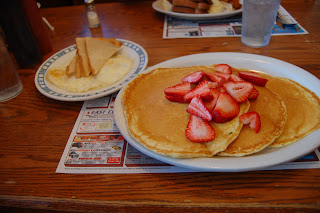 Months and months ago when Doug gave me my histogram for the year there was a slot for a race on the weekend of July 2nd.  Problem with the weekend of July 2nd is the fact that there are no races because of the holiday.   After lots of searching, I found an Olympic distance race just outside of Buffalo, New York — Tri in the Buff.  I convinced Shaun that the seven hour drive to Buffalo wouldn’t be too bad and he agreed I could sign up.

On Friday (day before the race) I got in an easy bike-run and then headed to Paul’s for a pre-race breakfast of champions: pancakes, toast and eggs.  I was lucky, Erica joined me for break fast because Shaun had a conference call.  After breakfast, Shaun and I headed to Buffalo.  Seven hours later we arrived and met up with Mary and Luc Eggers (Mary was doing the race announcing and Luc was racing in the kids race) for pre-race dinner. Mary is a fantastic race announcer, if you haven’t 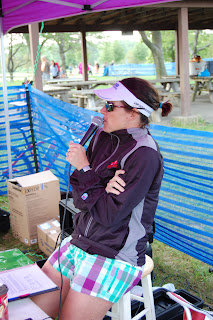 had the Mary Eggers experience you should try to attend a race she is announcing.  After dinner, I unpacked my bag to set out my clothes for race morning.  At that point I realized that I had forgotten to pack a tri top.  Thankfully Mary had an extra bathing suit in the car, which I borrowed.  Only problem was it said “eggers” across the back side.

Race morning we were up at 4:50 a.m. and went through the usual applesauce, banana, whey protein, Ironman Perform routine and headed to the race site on the shores of Lake Erie.  Set up transition quickly and hung out with Mary until race start.

Swim
30:55 (1:52 / 100).  Not my best swim time, from the results it looks like the swim course was pretty long (the elite male times were in the 27-28 range so my time wasn’t so horrible).  Still it feels crappy to come out of the swim feeling like I’m “behind.”  Other than the mediocre time, the swim felt good.  My right shoulder was a bit sore, not sure if its muscular or he labrum acting up again but other felt good.

Bike
1:14:23 (20.5 mph / 157 bpm).  Course was rolling double loop with a cross wind throughout most of the bike.  Total mileage was a little long at 25.5 miles.  Bike started off rough.  My legs were complete blocks of lead.  It was probably a bad idea to do my ZR workouts before driving because legs tightened up pretty badly during the drive.  I think next time I need to drive first and do my ZR workouts at the race sight to loosen things up.  First few miles were pretty slow, couldn’t get over 18 mph.  After the first “long” climb my legs warmed up and I was able to pick up the pace.  I ended up being able to ride the second loop about 2 minutes faster than the first. 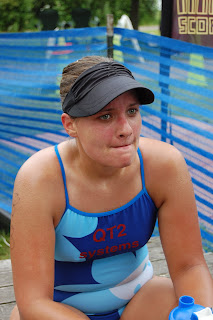 54:30 (8:19 min/mile / 168 bpm).  Course was another double loop and was long — my Garmin picked up just over 6.5 miles.  Each loop at a pretty significant (and steep) hill at about the half way point.  Apparently they had to re-route a run to avoid a birthday party and it added about .15 miles per loop.  I didn’t mind the extra mileage, what I did mind was the fact that about half of the run was on grass.  I hate running on grass (or trails or anything that is not pavement).  My ankles are ridiculously wobbly and I avoid trail running like the plague.  Trying to pick my way through the grass definitely cost me some time.  Although there were 2 super positives on the run: (1) I was really happy with my HR difference between the run and bike; and (2) I was actually able to run several girls down, I’m not used to passing on the run. 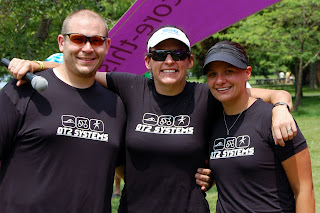 My final time was 2:41:XX, not fantastic from a time perspective, but not horrible considering the course length.  I ended up placing 8th OA for females and 2nd in 30-34.  Post-race I went for a short cool down run with Shaun and then floated in Lake Erie for a while.  65 degree water feels pretty good post-race.  We hung around for awards (a pink camo hat) and got to see Mary do her awards presentation thing.

Post-race Shaun I headed to Niagra Falls.  I had a huge need to go on the Maid of the Mist.  It was a pretty cool boat ride, we got to go right into the Horshoe Falls on the Canadian side.  We got soaked.  Below is a picture of use post-soaking with the American Falls in the background. 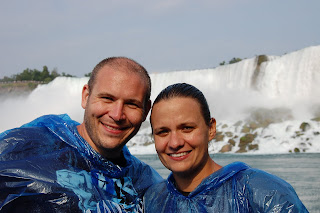