As many of you know Ryan and I are working to raise $10,000 for the Adirondack Medical Center through the Ironman Foundation (Ryan is racing Ironman Lake Placid).  The $10,000 number is important because its the cost of a NICU incubator.  Due to current resources in the High Peaks region of New York state (where Ironman Lake Placid takes place), little ones in a similar state to Ryan’s son Owen would need to be life-flighted to either Albany or Burlington, Vermont to receive critical care. We want to help make sure that families can take comfort in some type of security in the High Peaks region.  Ryan and I are lucky to be financially comfortable (even with the ridiculously cost of childcare in Connecticut) but $10,000 is still a BIG ask.  Right now we’re at about $5,600 (as of the writing of this we have $2,600 in donations that were mailed in and have not yet posted).  It would be awesome to post our fundraising site on Facebook and have $10,000 in donations roll in, but life is not that simple.  Instead we’ve mapped a road to $10,000 and here’s what it looks like:

The First $2,000  — This was the “easy” part.  Our first $2,000 came from friends, family and acquaintances who learned about our fundraising efforts from social media, emails and word of mouth.  To sweeten the pot we were also lucky enough to receive a donation from Boco Gear of 48 #OwenOtter technical trucker hats that we’re sending out to anyone who donated over $30 to our fundraising efforts (Ryan and I absorb the cost of mailing the hats). 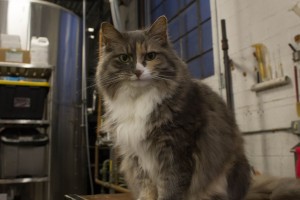 $2,000 to $3,000 — The next $1,000 was a little trickier.  Over the course of February Ryan and I set up a series of raffles on the blog (you can view them here, here and here).  Everyone got a free entry (gotta comply with the law) and then additional entries were available for doing a variety of things including visiting our Owen Otter Facebook page and making a donation to our fundraising efforts.  Some of the prizes were donated by very generous sponsors and others were donated by Ryan and I (Ryan and I have yet to make a cash donation to our efforts, our “donations” have come in the form of paying for things we use in our fundraising efforts).  The raffles were pretty successful and we were able to raise about $1,000 dollars during the 3-4 weeks we ran the raffles. 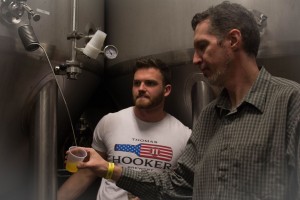 Sampling the beer at Hooker Brewery.

$3,000 to $5,500 (Hooker Brewery Fundraiser)  — This is were things start to get hard.  On March 18, 2017 we held a fundraiser at the Thomas Hooker Brewery in Bloomfield, CT.  We charged $25 for tickets purchased in advance and $30 for tickets at door.  Each entry came with a raffle ticket and once people were there they had the option of purchasing additional raffle tickets for some pretty awesome prizes that were donated by local businesses including golf and a cart fees for four, a $150 spa gift card, a wine basket and a ton of race entries.  In order to hold the fundraiser we needed to pay the brewery a $300 fee to reserve the space and $10 per person for samples of beer.  In addition we had the event catered by Moes Southwest Grill (which cost about $350), purchased some paper goods and decorations (another $100) and had a cake made for the event (another $100).  Total expenses for the event ran about $1200.  Ryan and I paid for half of them and the other half came out of the event proceeds.  After paying expenses the total amount raised from the event was just over $2,500. 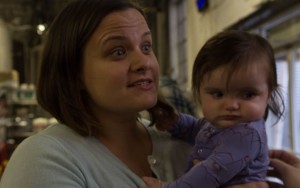 I was getting excited about something.

$5,500 to $7,000 (Morris Retro Run 5K) — Our next big fundraiser is the Retro Run 5K on May 21, 2017.  Registration for the 5K is currently $25.  While we direct three other races that net about $15,000 each year,  we have existing charity partners for each of those races. Thus, we needed to start a new race to specifically benefit our Ironman Lake Placid fundraising efforts.  We had early registration for $20 and race day registration is $30.  We expect the per runner fee to average about $25.  Total costs for the event will be about $2,200.  The way this breaks down in $600 for timing, $150 for pavilion rental, $300 for food, $300 for awards, $750 for shirts and $100 for miscellaneous expenses (insurance is provided by the Hartford Track Club without cost and the Town of Morris is providing police / traffic control).    Looking at these numbers we’ll break even at about 88 runs registered.  With 150 registered runners we’ll raise about $1,500.  I’d like to see us at 150 to 200 runners, but I’ll use the 150 number for a safe estimate (currently we’re at 40 preregistered runners). 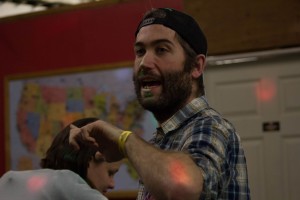 Ryan doing his thing at the Hooker Brewery fundraiser.

$7,000 to $8,000 (Sonic Endurance) — Along with Stacey Miller and Scott McMichael, I’m lucky enough to coach a group of awesome athletes through Sonic Endurance.  As a company we have a formula for distributing income after we pay all expenses.  Usually I use my share to pay for race registrations, triathlon gear and race ravel expenses.  This year I’m taking a chunk of my distribution and donating to our fundraising efforts.  I’m not sure what the exact amount will be, but it should be in the neighborhood of $1,000, taking us to a total of $8,000 raised.

The Final $2,000 — Ryan and I are not entirely sure how we’re going to get the final $2,000.  We have some hopes that the Retro Run 5K will net more than $1,500.  We’re in discussions with the Lake Placid Pub & Brewery about doing a fundraiser at the Brew Pub while were up there for the race or while were up there for a training camp.  We’re also talking to our local YMCA about a potential fundraiser.  If you have ideas for our final $2,000 we’d love to hear them.  We want nothing more than to have $10,000 raised by the time Ryan enters Mirror Lake on July 23, 2017.