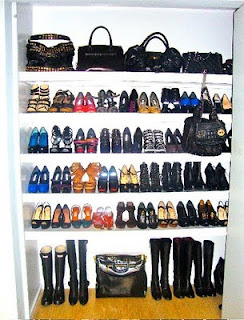 In season 4 of Sex and the City (back before Sex and the City was destroyed by the big screen) Carrie has the opportunity to purchase her apartment – but she doesn’t have the cash. When she visits the bank in search of a loan, we learn her full financial picture: $700 in checking and $957 in savings. Carrie tells Miranda how the bank called her an unattractive loan candidate. She asks Miranda, “Where did all my money go? I know I made some.” As she is saying this, she is examining yet another high heeled shoe. Miranda asks: “Uh, at four hundred bucks a pop, how many of them do you have? 50? a hundred? — One hundred times four hundred, there’s your down payment.” Carrie replies “Well, that’s only $4,000.” To which Miranda explains, “No, it’s $40,000.” At this, Carrie is shocked, “I spent $40,000 on shoes and I have no place to live. I will literally be the old woman who lived in her shoes.”

Not quite a down payment on a new house, but a solid down payment on a car (then again its only a quarter of what we paid for our wedding last year, so everything in perspective). Obviously there are some big purchases in there (a new bike, a computrainer) that won’t be purchased every month. Nevertheless, this is an expense pursuit both in terms of time and capital and someday if Shaun and I find ourselves without a home, while we won’t be able to live in my shoes we can at least use the bikes to shelter us from the rain.

Quite a revelatory article on spending and taking care of your case and whatnot. Agree that one cannot really keep up with their finances, unless one is pressured to do so.