With the launch of TriEqual, the question of Ironman World Championship slots for age group females has been raised by lots of our supporters and volunteers.

First and foremost I want to emphasize that the professional race and the age group race at Kona are two very different races with two different sets of rules.  Issues with inequality at the professional level are very easily fixed — it is as simple as Andrew Messick waving a magic wand.   Second, there is nothing about the age group question that somehow prevents Ironman from acting on #50womentokona.  Trying to tie them together is a delay tactic.

As I’ve written before there are issues with the current age group qualification process.  Per Ironman’s website slots  for Ironman Kona are distributed as follows:

– Final slot allocation will be determined on race day based on the number of official starters in each age group. If there are no starters in a particular Age Group, then that slot will be moved to the next calculated Age Group within the gender.

– Final Slot Allocation shall be representative of the actual number of Age Group starters in each age category in the race.

– Athletes MUST claim their slot in-person at the qualifying race during the IRONMAN World Championship Slot Allocation and Rolldown Ceremony.  Please check the event schedule of events for time and location of the ceremony.

In a nutshell, because each age group gets at least one Kona slot, regardless of the the actual percentage of athletes competing in that age group, there is proportional over representation of age groups at the far ends of the bell curve and proportional under representation of age groups at the center of the bell curve.  Outside of these issues there are significantly more slots for age group males than for age group females because more males participate in Ironman 140.6 events compared to females.

So what about equal slots for age group females?

I see this as a two part issue.

First, the current Kona qualification system needs to change and is likely going to change.  As Ironman continues to expand, adding new races on an almost weekly basis, eventually the number of Kona slots will run out.  Once upon a time 140.6 races had 100 Kona slots.  Now most 140.6 races have 50 Kona slots and most 70.3 races have 35 slots for Ironman 70.3 World Championships.   While there is some room for additional slots at Kona, the number is limited.  In order to keep growing, Ironman is going to have to change the Kona qualification system as it will not have slots to “give” new races.  I don’t know what the answer is (people have suggested a points system linked to All World Athlete rankings and a regional qualification system), but I hope that Ironman will consider increasing the number of slots available to females.

Second, there is currently a mechanism to increase Kona slot parity between male and female age groupers without any change in policy or practice by Ironman.  If more women race Ironman races, they will be allocated more Kona slots. For example if 50% of the starters at Ironman Lake Placid are female, 50% of the available Kona slots will go to female athletes.

Ironman has ignored calls to discuss equality for professional female triathletes at Kona.  There has been absolutely no public response to the #50WomentoKona movement from Ironman, World Triathlon Corporation, Providence Equity Partners and Andrew Messick — pure radio silence.  How can the influencers and thought leaders who support #50WomentoKona in good faith encourage women to race Ironman branded events when Ironman has shown disregard for #50WomentoKona and the hundreds of athletes (both professional and age group), coaches, fans, sponsors, media outlets and podcasters who support equality at the top level of the support.

Until Ironman commits to equality at the top level of the sport, I cannot support, or encourage others to support, a brand that institutionalizes discrimination. 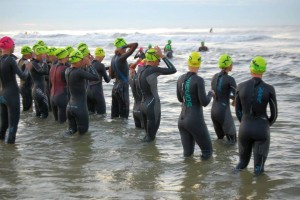 I through with WTC as well. Challenge Atlantic City and Beach to Battleship for me.

And when the dinasours wake up they might want to look at the name change. Challenge races are on the heels of IM. Having now raced with them i can see the difference. IM are hoping that by ignoring the call for equality, you will go away. Please don’t.
I will remain positive but being uber corporate, not sure they will listen to reason

We’re not going anywhere. To steal a phrase from one of the Tri Equal co-founders. We’re endurance athletes, we’re really good at going long.