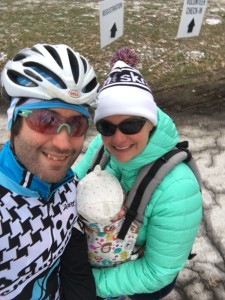 Family photo before the race

From time to time, I have a good idea. This was not one of those times.

In the middle of December, while kicking around the Internet at work, I discovered that USA Cycling would be hosting their Cyclocross (or CX, for those in the know) National Championship event here in Hartford in January. Me, being ambitious, decided that it would be a bit of an adventure to try and race in the non-championships race on Tuesday, as well as the industry race on Saturday morning. (I still count as bike industry!)

Kelly gave her blessing (an exasperated shrug, really) and let me get the Kona Jake the Snake together for this purpose.

The first sign of trouble with this endeavor came during the registration process. Simply put: USA Cycling made it about as difficult as possible to be able to register for this event. It’s generally a bad idea to be trying to migrate your entire licensing/member registry to a new platform during the time where people are attempting to register for your National Championship event. I would’ve taken this project immediately following CX Nationals, but that’s a whole other story. At any rate, it took nearly a week of back-and-forth for me to be able to even get to a point where we could give them money.

Following that debacle, work then got in the way of being able to participate in the non-championship race on Tuesday. So I registered myself solely for the industry race. Great! Let’s race against people who, you know, do this for a living plus people who are more skilled at this than I. This’ll be “fun.”

Additionally, we needed to swap in some actual CX equipment. Kelly keeps the JTS as her road bike, for the most part. We needed to put some pedals on and get some tires. Well, that naturally was more difficult than it needed to be; I went to order online, paid for express shipping, and then they proceeded to send it UPS Ground. Not. Useful.

At this point I should’ve probably just packed it in and called it a day. As I was about ready to do that, Kelly had a breakthrough – somebody would let me borrow their excellent CX machine for Saturday morning. That someone – Rudy – was overwhelmingly nice with his gear and getting stuff together.

With everything lined up, I started to watch some of the course previews, got excited, and got ready to do some work.

And then it started to rain.

And this is what things looked like for that race I was supposed to do on Tuesday:

Mother of God. What have I done?!?

With that said, USAC did a phenomenal job all week long managing the course and conditions as best as they could. They eliminated sections of the course like the slip-and-slide and the south section of the course when it was too muddy; they re-groomed massive ruts; moved barriers and more. The overall effect was an incredibly professional job.

By the time the masters races on Friday had rolled around, temperatures had cooled, resulting in a cross of mud and frozen ruts. Rudy went racing on Friday, did a single-lap and quit. It took a good 15 minutes in the power washer to remove one lap of mud from the bike, and then off I was to get it ready for tomorrow.

Saturday morning dawned cold. As in – single digits cold. Ivy promptly spit up all over me as I started to gear up. We stopped for gas, Kelly mentioned “at least there’s no wind;” the wind immediately began blowing. We got there and I immediately lost feeling in my toes and wouldn’t regain it until four hours later.

This was not promising. I rode out, got a quick lap around the bottom end of the course done, and immediately got myself to the starting area for the race. 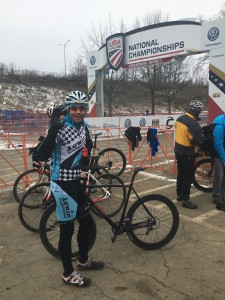 Waving goodbye, hoping I would survive

For those interested, here’s the gear breakdown for riding CX in single-digit temperatures:

The industry race featured 68 registrants; 41 of us actually showed up at 7:50 AM on a Saturday morning for the 8 AM race. We received the go for line-up and it was time to be brought before the executioner – er, race starter.

The gun went off and the front of the field was gone. I mean, lost before the first turn gone. I hammered as hard as I could and immediately discovered two things:

I kept up with the crew until Bonk Breaker hill, which was this massive side camber craziness. I damn near lost a shoe, and the field was completely away. Great. I have to do this practically on my own. There was one other guy who was close to me, so I had the “please for the love of God at least let me be faster than him” thing going for me.

We came down the massive hill for the first time and my hands were numb. The thought to myself of “you are an idiot” that usually shows up about a mile before the end of a race had already crossed my mind, and we were a mere three minutes into a thirty minute race.

Through the woods section for the first time, and I got to experience first hand how technical, rutted, and frozen over this section was. Thankfully, I managed to keep the bike upright. Following this wooded section featured the barriers, the southern end with off-camber turns, flyovers, and back into the start-finish straight. This section was by far my favorite; challenging while not punishing, a great mix of technical handling elements and power tests.

After each lap my confidence grew, which also saw my lap times continue to decrease. I did get lapped on the final lap, which given how much time I was giving up on Bonk Breaker Hill, I took that as a massive complement. I got some props on my line choice from the front of the field to stay out of the way of the race, and was able to latch onto their wheels and hang through the more technical elements of the course.

Finally, it was over. Coffee! Beer! 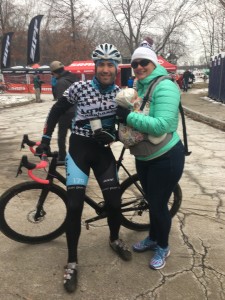 Although I finished way in the back of the pack, this was incredibly fun. I have to give a ton of credit to USAC, CCAP, and the rest of the organizations in charge of the event. That and ‘cross is everything sport should be and more – challenging, fast, fun, and fantastic people.