Baby steps.  That’s where I’m at.  Huge big goals for 2017 led to huge big disappointments (no Ironman Florida and pretty much stalling at developing any type of meaningful fitness).  I’ve learned that lesson.  While 2017 sucked, it has taught me lessons — that Squish throws a monkey wrench into almost every attempt at scheduling and that just because I feel like I can pull everything together six months before an event, it doesn’t necessarily mean I can. Training and racing takes a back seat to the demands of the Squish (as an aside, I totally feel Gwen Jorgenson’s decision to race marathons, figuring out how to make things work post-baby is hard). 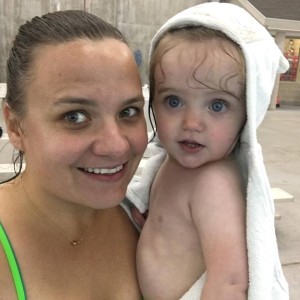 Ryan swims and Squish and I work on getting her comfortable in the water.

As Ryan and I both tried to get in a swim last weekend, I came to the conclusion that we have a fair bit going against us when it comes to training.  Neither of us have family in the area.  I’m more than a little jealous of people who are able to use grandparents or other relatives for a quick hour long drop off, to help pick up from day care on crazy days or to provide emergency childcare when a little one is sick.   I never realized how valuable my mother was for helping in these types of situations until she moved to Florida.  In so many ways Ryan and I are so incredibly privileged, I know and understand that.  Despite our privilege, we still struggle, especially when it comes to schedules and scheduling.  We’re getting better at asking for and accepting help (thank you Kim for watching Squish last week) but we still struggle to navigate our lives as adults and our lives as Squish’s parents.  We’re getting there.  Baby steps. 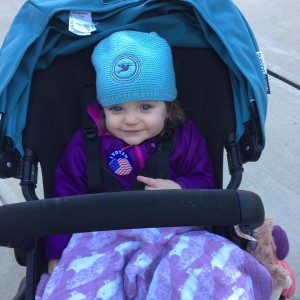 Squish’s internal clock is also tough.  I’m a morning person.  Ryan is a morning person.  So is Squish.  She wakes up somewhere between 5 and 5:30 a.m. most mornings (I am told there are babies that sleep past 7 a.m., some day I would like to meet one of these miracle children).  In an ideal world, Ryan and I would get up and train before she wakes up.  Unfortunately that would require us to be up at 3:30 a.m. or so.  As devoted as I want to be, that’s not going to happen.  Sleep is important.  Instead I wake up with Squish, nurse her, we feed her breakfast and most mornings I bundle her up and head out to run (yes, I’ve been running, and running fairly consistently, just not long or fast).  Trying to get a swim or bike in during the morning is pretty much impossible at this point.  Ryan has to leave for work before me making a trip to the pool hard.  Squish gets into all sorts of trouble if I try to get on the trainer (she now knows how to climb both up and down stairs).  Trying to train after work can be equally problematic.  I’m a morning person.  Doing things at night is, well, not my thing.  I have gotten better at swimming at night.  I’ve started hosting a short, hard swim workout two nights a week and its been really good at getting me to the pool and really good for pushing my athletes to swim hard.  I’m still working on the bike.  I’m going to try night time trainer rides this week.  I’m hoping that Moana coupled with some new downstairs toys might buy me 45 minutes of intervals. Or it might not.  Baby steps. 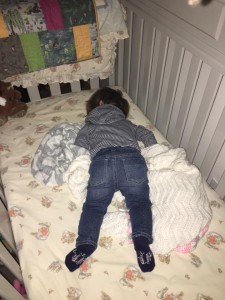 Some mornings Squish gets up WAY too early and needs a morning nap, killing any workout plans.

Since I’ve gotten a little more consistent, I’ve also begun to seriously think about racing and goals (and re-framing goals):

I know that in the grand scheme of things these aren’t huge goals or super fast times, but I need incentives where I am today, not where I hope to be in 3, 6 or 9 months.  Baby steps. 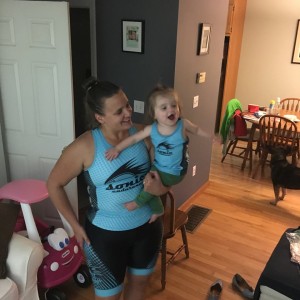