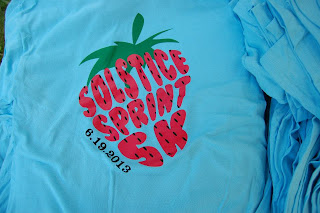 I race directed my first Solstice Sprint 5K (and my first race ever) on June 21, 2006. Seven years, 17 races, thousands of runners and over $50,000 in donations later, I helmed the 8th annual Solstice Sprint 5K on June 19, 2013.  It was a beautiful day for the race, temperature was in the low 70s and sunny and I was excited because after several years of stalling registration-wise, the race grew by over 100 runners this year (I attribute the growth to good word of mouth and FaceBook).  Growing a race can be a tricky thing.  As a race director I am always concerned about offering the best possible experience to every runner, I worry that if a race grows too quickly, the race may not be able to deliver.

I agonize over lots of things in life, and that includes the races I direct.  I think there’s a very fine line between creating a well organized, professional event that still remains personal.  I like knowing the names and stories of my runners, I like having lots of personal touches like homemade baked goods, I like offering a good value and I like being able to raise funds for organizations doing good work.  Sometimes I attend events and they’re either hopelessly disorganized or overly “corporate.”  I really want my events to be the best of both worlds.  I think we did a really good job of walking that line at the Solstice Sprint 5K this year.

We had a really great crowd and a fantastic pre-run yoga warm up courtesy of West Hartford Yoga.  There were several first time 5Ker from Stew Leonards Coach to 5K Program and a ton of little runners in the under 13 divisions, which always makes thing fun.  Plus we had several canine competitors, the most memorable of which was #199 who created this awesome video of his race:

The race itself went really well.  We had tons of fantastic volunteers (big thanks to Maureen Burns, Shaun Gallagher, Erin Aldi, Lea Crowne, Patrick Crowne, Lani Ralston, Peter Hawley, Jane Jarrow, Rob Hubbard and anyone else I may have missed).  There were some super fast times (especially on a rather hilly course — well in New England we call it rolling by my favorite Texan would inform me that its super hilly).  Lots of runners were able to finish their very first 5K, which is always an awesome experience.  We did have one medical issue (an allergy induced asthma attack) but the MDC and the West Hartford Police were super responsive.  Best of all, without corporate sponsors, we raised $2153.36 for the Farmington Library.  Overall a good day.