I getting closer to getting caught up on everything (at least we’re in June). One June 15, 2011, I race directed the 6th annual Solstice Sprint 5K. I started this race back in 2006 and its the first race I was ever directed. The race had really good success for the first 3 years, but in 2009, it needed a substitute race director because I had a trial in New York. It kind of suffered that year (low participation, low runner satisfaction and not enough love all around). Last year was a re-building year and it took a lot of effort just to get 100 runners. This year, however, we were back, attracting over 200 runners for the Wednesday afternoon 5K. Not bad at all. 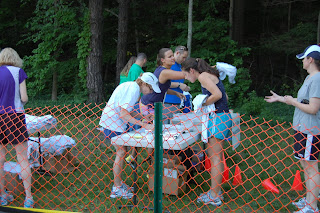 Weather for race day was beautiful, sunny and mid-seventies. Shaun and I got to the Reservoir at about 3:30 p.m. and had everything set up for the registration, which opened at 5 p.m. As usual my mom was there to help with food (let’s not I baked 72 cupcakes for the race, the fact that only 67 arrived at the race site had nothing to do with me and everything to do with Shaun). By 6:20 p.m. we had over 200 registered runners — nice, but we also had a little thunder and cloudy skies, not so nice. 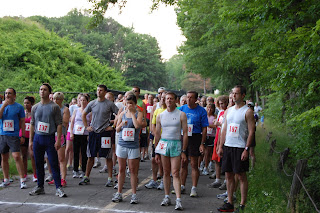 Despite the iffy weather, the race went off on time. At the last minute I decided to run (I needed to get a ZR run in and while a 5K isn’t really at ZR effort at least its running). So with no warm up and barely enough time to grab my Garmin we were off. The course is hilly. I tell people every year that its “rolling” but really its hill. The first mile is flat to up hill. The second mile is all up hill with some rather steep pitches and the third mile is flat to really downhill into the finish. The course is beautiful, but its a fairly hard 5K, at least there are no turns an its once big loop. 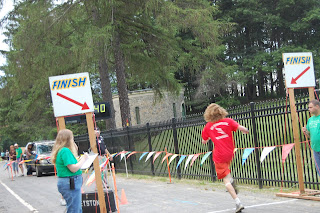 The winner, Wolfgang Gossman, a rising high school senior, finished the race in 18:41, just a hair over 6 minute miles (he’s the guy in the red t-shirt with the big hair in the picture). I came in 44th, in just over 24 minutes (as always decked out in Lululemon shorts, a Oiselle top and my K Swiss pika pika shoes shoes). I pretty much ran a 7:40, 8:40, 6:40, which gives you an idea as to the terrain — all in all not horrible for the hills. We had a pretty diverse group with runners from as far away as Arizona, California and Alaska. 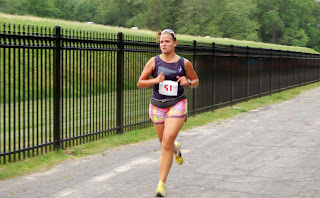 I ran an easy 2 mile cool down with Kathy Schultz and by the time we got back it was really starting to thunder. Shaun and I worked to get awards out as quickly as possible (we had nutella and home made strawberry jam for the winners) before the skies opened. As we were packing up it started to pour, but we got out of there before it got too bad. 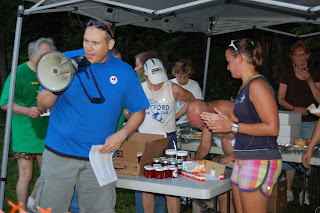