Typically, with running shoes, you wind up with compromises in footwear design. You have shoes that are perfect for those slogging miles, but don’t hold up well when you pick up the pace. Others feel fantastic when you’re running at tempo, but then seem like sloppy bricks strapped to your feet when you cool down. And then there are shoes on a spectrum in the middle.

But what if your run might feature all three of those elements during the course of it? Examples of that might include a marathon, or the run leg of a half or full distance long-course triathlon; you’ll have stretches where you feel good, stretches where you wish for a lightening bolt to strike you to end your misery, and everything in between. Or, alternatively, you might be a runner on a budget, looking to stretch your dollar with a one-shoe quiver.

This is the first in a line-up of shoe reviews, looking for shoes that could fit that motif – the actual jack-of-all-trades that doesn’t compromise on any of those missions. Other reviews are forthcoming on the Altra Torin (note – in the interest of full disclosure, Altra is a sponsor of ours through Maverick Multisport), New Balance 1080v6, Hoka One One Clayton, and more. 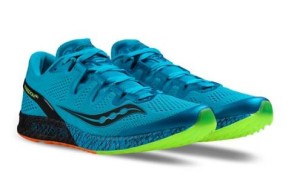 There’s really two major things going on with the Freedom – the EveRun midsole and the ISOfit upper.

EveRun is Saucony’s foray into a completely new midsole, replacing the PowerGrid (which replaced ProGrid, which replaced Grid…). You’ll note the lack of “Grid” anywhere in this shoe, and that’s because it doesn’t feature any. It’s the first time in a long-time that a Saucony shoe didn’t have Grid in it.

So what’d they come up with? EveRun is a TPU material, just like Adidas’ Boost technology. Saucony introduced it in 2015 as the foam sitting on top of the board lasting in the shoe, making the shoe feel more responsive. After intoducing it with a 2 mm thick layer initially, Saucony has been able to add more EveRun into each of their shoes.

The Freedom, under the mantra of “if some is good, more must be better,” features a full-length EveRun midsole. There’s no EVA to be found anywhere here. This makes it very similar to the original adidas Energy Boost in terms of the cushioning technology. Also similar is the use of high-quality rubber outsoles; Saucony claims crystal rubber, whereas adidas utilizes their partner, Continental.

The similarities don’t end there; the uppers of those shoes are comparable, too. Saucony two years ago introduced the concept of ISOfit, a new methodology for their uppers (which, traditionally, have been the weak point on Saucony’s shoes). Saucony claims that this technology allows the shoe to morph to the fit of each user, giving every person a more customized fit solution. It’s really a single-piece upper that features certain eyelet characteristics depending on how well-wrapped the midfoot needs to be in the shoe (more stability models feature more pull on the medial side of the shoe; neutral models like the Freedom are more bilateral in their pull). The end result is a shoe that looks less bulky in the upper than a more traditional model. And…well, a shoe in black that looks a lot like an Energy Boost: 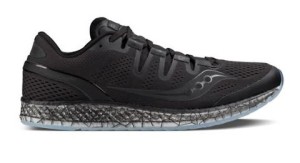 The Freedom features a 4mm offset from heel to toe, with 23 mm heel heights and 19 mm forefoot heights. It weighs in at 9.0 ounces in a men’s size 9. Your sizing will result in variances; my size 13s…well, let’s just say that they’re not going to weigh the same. But by comparison, they still feel light when compared to other size 13 boats.

So, How do They Feel?

Let’s get the one thing I dislike about the Freedom out of the way: the sizing, much like the aforementioned Energy Boost, is small. My foot measures to about a 12.5, and I traditionally will run in a 13. I’m contemplating a 14 in these. This has less to do, I think, with the length of the shoe being off, but rather the ISO material resulting in less volume at the end of the shoe. The lesson: be prepared to size up and ignore whatever size the box says.

When you first slide your foot into this shoe, take notice of what you don’t feel: overlays, stitching, or mesh. Instead, imagine you’ve put your foot into a good pair of socks; it stretches, gives, and wraps around your foot. That’s the beauty of this upper. It reminds me a lot of some of my favorite Swiftwick socks (note – yeah, another sponsor) or Feetures! socks; it’s snug and secure without feeling like you’re squeezing your foot together inside the shoe.

OK, there’s one other thing I don’t like about the Freedom: the flat laces. Starting with the original Kinvara, Saucony has been moving towards flat laces for their shoe. Decidedly retro, I wish they would have stayed retro. I also have not found an appropriate blue color lace to replace the flat ones.

As you can probably imagine, if I’m complaining about the laces, there isn’t much for me to be picking at. And that’s entirely true. This shoe simply excels when you start hitting the pavement. Slow and low runs take advantage of the ultra-plush cushioning that Everun provides. Start picking up the pace, and the responsive characteristics of TPU come to life. I’ve done just about every pace in this shoe that I run, and I can’t find a single thing wrong with the feel of the shoe underfoot. Whatever you ask of it, the shoe replies with “OK, let’s go!”

That, in my opinion, can’t be spoken highly enough about. In an era where shoe cost continues to escalate and the marketplace begins to contract, shoes that successfully can solve for a runner’s needs across multiple distances and tempos will be winners. On that front, Saucony put a winner together.