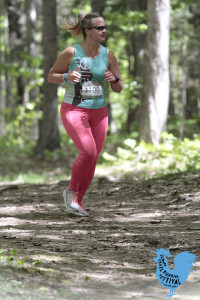 Trail running in the original Cliftons.

Intro: For a long time I’ve been a Saucony Kinvara girl.  I’ve run hundreds, if not thousands, of miles in the Kinvara 3, 4, 5 and 6 (and have several special editions as well).  While I love the Kinvara post  bike crash and knee surgery I wanted something a little softer.  I tried the Hoka One One Bondi previously but felt like I was running in clown shoes, so I was hesitant to try another Hoka.  In April I was at the Boston Marathon Expo and Ryan suggested the original Clifton.  I tried it on and first impression was “these are ridiculously light.”  Second impression was they fit well on my fat, short feet so I decided to buy them.

It was love at first run.  They were light, reactive and soft without being squishy.  While the shoe had more volume than I was used to it was super light and had good ground feel so I didn’t notice the extra volume while running.  Best part was that they required no breaking in period and were good to run in from the very first time I put them on.  Just three weeks after purchasing them I used them for Ragnar Cape Cod and they felt fantastic.  Given how much I loved the original, I was excited when Hoka released the Clifton 2.  I ordered them from Zappos and with free overnight shipping I had them less than 24 hours later. 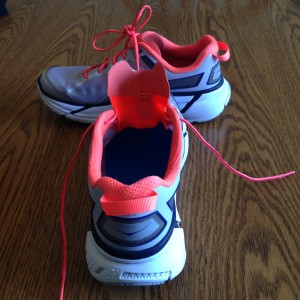 No padded tongue on the originals.

Tech Information:  (Big shout out here to Ryan for the technical info).  Hoka One One was borne out of the ultra running community. The original design, the Mafate, came about when Nicolas Mermoud and Jean-Luc Diard both wanted a shoe that was light enough for ultra marathoning, but well-cushioned enough to pick up speed on descents without beating up on the quads.

The revolution that Mermoud and Diard discovered was that the secret wasn’t more foam; it was more air in the foam. Ethylene vinyl acetate (EVA), aka the stuff most running shoes are made from, winds up curing in a matrix pattern, with strands of the foam encapsulating air pockets. Mermoud and Diard’s design simply made the material pliable enough to get more air in between the strands of EVA. By increasing air volume, it increased the amount the shoe would deform on impact, giving the cushioning factor. But because it wasn’t more material being added to the shoe, it retained the weight properties of a shoe with a much smaller midsole height. Additionally, by filling out the sole underfoot for full ground contact, the shoe was very stable despite its increased stack heights; generally, as a shoe gets more cushioned, it loses some of the stability properties.

The line-up launched in 2010 with the flagship Mafate, Bondi, and Stinson, and quickly became a top brand. It soon drew the attention of Deckers Outdoor, which purchased Hoka One One in 2012. Sales exploded. But some pushback remained: these shoes are simply too soft for me.

The answer to those folks is the Clifton. Featuring shorter stack heights than the aforementioned models, it still retains additional volume in the foam itself. However, it features a far more traditional stack height of 28 mm in the heel, and 23 mm in the forefoot. To put that in perspective, some of the stalwart neutral running shoes like the Asics Gel-Nimbus and Cumulus, or the Saucony Triumph, all feature higher midsole heights than the Clifton. The Clifton also retains a 5 millimeter offset (difference in height between heel and toe), putting it in company like (one of my personal favorites) the Saucony Kinvara and the Brooks PureFlow.

For 2015, the primary change to the shoe came in the upper. Hoka had gotten feedback from users that the thin tongue introduced across the line-up in 2014 had made their shoes too high-volume, resulting in sliding around on the interior of the shoe. Hoka’s response was to add a thicker, padded tongue to most shoes. Otherwise, some additional rubber was added to the outsole to increase longevity of the tread; the original design featured a lot of exposed midsole material, which increases feedback from the ground at the expense of durability of the material. 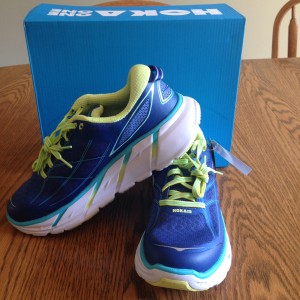 Then there’s the shoe width.  The originals were particularly wide, the twos are a little more narrow.  I have wide feet (In running shoes I’m a size 8 and will buy a wide (D) whenever I have the option).  In the Kinvaras I would often pop out the side of the shoe after a couple hundred miles.  This being said the Clifton 2s are more than wide enough for me.  The slightly narrower foot bed actually makes them feel a bit more secure than the originals.

The outsole is also tougher.  I tend to chew the shoes up pretty quickly as I’m a severe supinator and hit very hard on the outside of the shoes.  As much as I love the originals I tore up the outsole on the left shoe after about 100 miles.  I now have over 100 miles on the Clifton 2s and the outsole is still in really good condition.

Overall these shoes are fantastic.  They’re light and responsive with good ground feel while still providing lots of cushion.  Right now I’m using these as both my everyday running shoes and my “racing” shoes.  I’d like to branch out and try the Conquest 2s as a training shoe in the future but for now the Clifton 2s are my all around go to trainers. 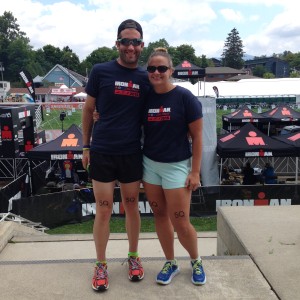 I’m curious to try them.

I have flat, wide, neutral feet and have been in a couple pairs of the original Cliftons now.

The first part lasted me over 500 miles and I still can get some use out of them.

I have had some pretty significant injuries over the last few years, but can attribute making it through training and finishing my first IM because of them.

So my question is weight wise do you notice a difference?
The tongue, I never had an issue with, and I use lacing systems so never really tightening once they are set.

I wonder how these changes will affect what I love about the Cliftons.

Only way to know is to give them a try out and hope they are still as good for me.

Weight wise they feel identical. Possibly even a little bit lighter. I’m in the same foot type as you — wide neutral feet with some significant knee injuries.

Nice write up! I’m also curious to try them. Have heard great things!

The Clifton is not for everyone. This is a shoe geared towards light weight efficient runners to be used for tempo runs and racing. This is not an every day shoe in my opinion.

Anyone interested in Clifton 2, I would suggest to check out the Ginger Runner’s review of this shoe on You Tube. He does have issues with the shoes such as the increased weight (1.4oz) and narrowness of the shoes.

Also, check out the comments on the Running Warehouse site before paying out your $130 for the shoes. The reviews of the customers have been much less than favorable.

There wasn’t any assumption in the course of the blog that it was, in fact, meant for everyone. That being said, I would disagree with your premise that this is “geared towards lightweight efficient runners to be used for tempo runs and racing.” People prefer as much or as little shoe as they care to run in. Injury rates do not decline with specific amounts of cushioning nor stability out of particular shoes.

“Traditional” Hoka buyers of the Bondi and Mafate are likely to not enjoy the fit experience of the Clifton. During the update, they made the conscious effort to leave the Huaka as the “wide Hoka light shoe” and have the Clifton be the narrower model, rather than have two shoes sit on top of one another and steal sales from each other. Very common in the industry (see: further differentiation between the Mizuno Sayonara and Hitogami).

Is it for everyone? Nope. But it doesn’t make it any less of a great shoe for Kelly or others with similar feet and taste in running footwear.

Ryan, the Clifton 2 is a performance neutral shoe. I equate a performance shoe as one which is worn on tempo runs and races. This is not an every day shoe in my opinion, especially those who tend to be a bigger runner.

Now I have not weighed the shoes myself. I never trust the manufacturer’s specs because they are wrong more times than not. Therefore the .6 oz difference between the first and second versions means nothing to me. Here is where I got the the 1.4 oz increase from. https://www.youtube.com/watch?v=dPJrB_SyOhA