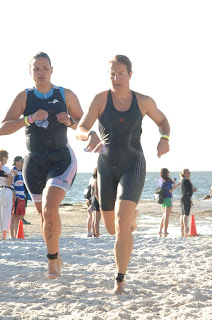 It only took a little over a week to get the pictures, so I guess its time to actually write my race report for Saint Anthony’s. I was a big, nervous wreck going into this race. Its my first triathlon after a long winter of lots and lots of base training and I wanted to see what I would actually be able to do. Race morning, we were up at 4:45 a.m. for a breakfast of applesauce, whey protein, a banana and a bottle of Ironman Perform, then off to Vinoy Park in St. Petersburg. As we entered transition, race officials were announcing that the swim had been changed. The 1.5K swim from Spa Beach to Vinoy Park had been replaced by an approximately 1K swim along the beach adjacent to the park. I wasn’t super happy about that. As much as I dislike swimming, I’m generally faster that lots of other people (especially the faster runners) my swim essentially gives me a few more minutes to play with on the
run.

The Swim
I went off in the 16th wave, exactly one hour after the pros. We started from the beach and had a short run into the water. Out to the first buoy, right hand turn, follow a long line of buoys, out past the swim exits then a right hand turn and a diagonal swim back to the swim ext. The swim was not only short, but fast (with the tide and wind). My in the water time worked out to about 1:30 / 100 yards and my total time was 17:20, which included a run up through the soft sand to the timing mat.

T1
Because of the change in the swim, T1 now involved over a half mile run from the swim exit to the transition area (my Garmin clocked my T1 at .65 miles). During the swim I swam up on the two waves of Clydes in front of me, problem was lots of them didn’t want to run through T1 and instead were plodding, so there was lots of me yelling “on your left” and asking them to move aside. Once in transition, things went quickly (I has a super sweet transition spot — on the main aisle, six bike in from the swim and bike in). Total transition time was 5:01. 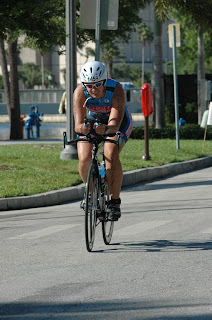 I was really looking forward to the bike. I know my biking ability had gotten a lot better over the past year and I thought I would be able to hold 21-22 mph on the bike. I was wrong — I finished in 1:12:47 (20.5 mph). Bike started out poorly, my Quark would not calibrate correctly and my power readings were way off. I had planned on riding the bike based on power and no longer had power to use as a metric, so I decided just to ride at as hard of a pace as I could sustain. My pace and effort was not bad when I had clear road, but that was rare. My swim wave was behind several “slower” waves — Athenas, Clydes, older women, challenged athletes and there was a lot of “course clutter.” People were riding at 16 or 17 mph 3 or 4 wide making it really difficult to pass. There were also lots of corners and 180 degree turns where I had to hit the brakes hard because riders in front of me drastically slowed down. I was just really frustrated with the entire ride. I felt like it wasn’t my ride. In retrospect it was a huge improvement over 2010 (I rode a 1:21:34 in 2010, so I was almost 10 minutes faster in 2011) but I know I have the ability to go faster.

T2
T2 was uneventful. Had a fairly quick transition and headed out to the run in 1:47. 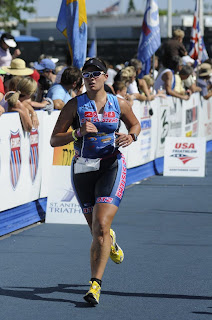 Gonna be about the same temp if not worse at IMTX. You better get used to the heat. Good job.