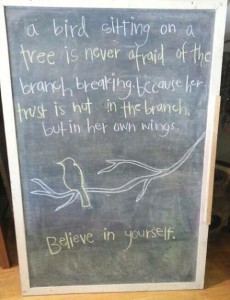 In college I had a friend that, after every party or formal, would come back to the house, stand in front of the fireplace and ask “so what so we think, thumbs up or thumbs down?” as she moved her thumbs up and down to gauge the group’s approval.   There was never a night that was a completely thumbs up or thumbs down, every party, every tails, every formal, every night was somewhere in between with both highlights and low lights.

I feel the same way about New Year’s resolutions, they’re neither thumbs up nor thumbs down but somewhere in between.  I think its a good idea to take the time to reflect on things upon which you can improve but  making hard universal statements  that you have limited control over (for me, for example, I will lose 40 lbs) can be counterproductive.  With that in mind there are the five things I would like to work on in 2014:

1.  Define Myself in the Positive.  I spend a lot of time defining myself in the negative — I’m not thin, I’m not fast, I’m not good enough.  I let other people define me in the negative too — I don’t have children, I generally don’t conform to lots of cultural norms.  In 2014 I want to work on defining myself in the positive.  Both both roles I occupy — I am a runner, I am a triathlete, I am a lawyer, I am a race director, I am a coach, I am a wife and qualities I embody — I work hard, I am principled, I am generous.  While there are lots of things I am not, the things I am are pretty fantastic and I need to work on focusing on those, which lead to Number 2.

2.  Let the Uncontrollable Go.  I have heard and I have preached “control the controllables” in training and racing.  Essentially you need to focus on what is within your ability to affect AND let things go that you cannot control.  I have the first part of that statement down; the second part needs work.  I struggle with body image and body composition.  Many days I feel like my body is not mine and that I’m carrying around something foreign to myself.  While I know that I have little control over my genetics, hormone levels and chemistry, I regress into thinking that there must be something I can do to control the situation.  Often that something is to decide not to eat.  In 2013, I started to deal with these issues more productively but I’m not 100% there yet.  In 2014, I want to work controlling what I can control — making good food choices, training and recovering and accepting that I cannot directly control my weight (I hopeful that Dr. Donatello will help me find some answers, I know there is no magic pill, formula or process). I am working and I will continue working on going from from knowledge to understanding and acceptance.

3.  Judge Less, Applaud More.  I am a judger (on a Briggs Myers test I am strongly INTJ — Introvert, INtuition, Thinking, Judging).  I judge myself and I judge others.  Often I rationalize judging others with the fact that I judge myself even more harshly.  I sometimes forget that everything, including success, is relative.  Running a 5K for the very first time can be just as huge as an accomplishment as qualifying for Kona depending on the individuals in question. In 2014 I want to work to judge both myself and other less and to applaud both my accomplishments and the accomplishments of others more.  Gold stars are good and I should give them out more freely.

4.  Ask for Want I Want and Need.  Many times in life I get frustrated that I’m not getting noticed.  In 2013, I started to learn that if I speak up and ask for what I want, I am much more likely to get it.  Over the summer I first noticed www.witsup.com and I liked what they were doing.  Instead of waiting around for them to notice me (which would have never happened), I sent an e-mail to their editor-in-chief asking to write for them.  Ta-Da, it became a reality.  Same goes for sponsorships.   I really liked Skratch Labs and I needed a hydration sponsor for my races.  I sent an e-mail asking if they could help out and it happened.  In 2014, I need to continue focusing want I need and want, identifying who can help me make it happen and then pursuing them to make it happen.  There are lots of super cool people doing amazing things.  No one is going to notice me if I don’t keep speaking up.

5.  Remember the Value of Friends and Teammates.  I often get into a very “me against the world” kind of stance.  In some ways its appealing, but its also exhausting.  I have a large network of friends and teammates (and, of course Shaun) about whom I sometimes forget.  In 2014 if I need help, or advice or just some kind words I will just ask.  I will remember that as much as I may sometimes feel alone, I am not.

Happy New Year everyone, I hope your 2014 is fast and fabulous.

Great blog post, Kelly! I relate with a lot of your list, especially the asking for what I want and need. I mean should people just KNOW how awesome I am and what input/feedback I require? Apparently not! 😉 I’m working on putting myself out there more and requesting things. What I’ve learned is that people would rather say YES than no.

So true! I think while man of us are really good at doing awesome things, its sometime tough to stand up, be proud of what we’ve done and let others know. Awesomeness should be shared!

Kelly, this is a great post and a great reminder for me! Can’t wait for 2014 to really get started!