Once upon a time I was a swimmer. I swam as a age grouper for the Southington Stingrays from the time I was 5 years old until I was in high school. As a teenager I swam for Southington High School. Once I got to college, I played water polo for Dartmouth. So, from the age of 5 until I was 21, I spent several hours a day in the pool swimming. The problem is I was a flyer. I spent years perfecting my butterfly stroke and dolphin kick and never really concentrated on freestyle. The only indication that something might be wrong with my freestyle stroke was after my freshman year swim season. At the annual banquet each swimmer received an “award” — mine was for craziest freestyle stroke.

On Doug’s advice, I decided to have a swim stroke analysis done by Jesse Kropelnicki at QT2. As part of the analysis Jesse filmed me swimming and then went over the film in detail during a classroom session. Turns out I have one messed up stroke. Here’s the video:

So I have a lot of work to do. The biggest thing for me was actually seeing what I was doing wrong and understanding what a fresstyle pull should look like. I’m working on the pull now. Once I get that down, I move to the kick. Finally, here’s a good diagram of what the pull should (and shouldn’t) look like: 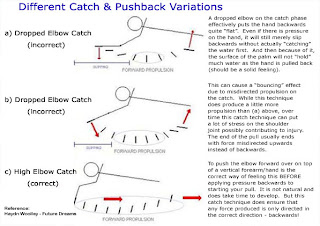