Earlier today, Ironman released an announcement concerning pro prize purses and the qualifying process for the 2014-2015 Kona cycle (you can read about the changes on Triathlete or Lava Magazine).  While I don’t think that offering deeper prize purses and qualifying points at fewer races is necessarily a bad thing, I have some concerns about WTC’s plan and its potential long-term impacts to 140.6 racing.  In short, WTC is eliminating pro prize purses and points at Boulder, Louisville, Wisconsin, Maryland, Lake Tahoe, Florida, Muskoka, Los Cabos and Lake Placid (it appears that the prize purse eliminations will take place in 2015 so prize money will still be available at the fall 2014 races).  This also means that automatic qualifiers (high finishers at Kona) can’t validate their 2015 slot at these races either (so no more Kona champions walking the run course at Ironman Florida) — it is unclear whether pros can validate Kona slots at 2014 races.  The press release also addressed the issue of gender equity in Kona, but only tangentially stating that it would be looked at in 2015.

While in the short term this may have the stated effect of making Kona level pros more visible to sponsors and age group athletes a like, I see a few longer term issues with the plan. 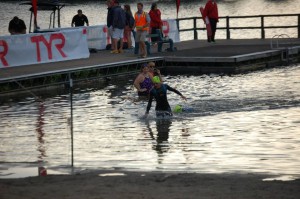 Something we won’t see again — pros emerging from Mirror Lake

Kona is P-8000 race.  The 10th place finisher at Kona gets 3,100 points which, if the athlete is male, comes close to guaranteeing a slot in the succeeding year’s race as long as they validate the slot and, if the athlete is female, means a solid performance at a 140.6 validating race and a 70.3 should be good enough for a Kona slot.  While there is a points bonanza at Kona, in previous years, athletes who didn’t qualify for Kona could race 1-2 140.6 races in the fall to make up for not being on the Big Island.  Rather than having multiple options for points in 2014, athletes will only have two P-2000 races between September and November (Chattanooga and Arizona) and while December races exist, they’re in Australia, making it difficult for North American and European athletes.  Points will be particularly hard to come by this year at Arizona because, for athletes who raced Kona and are looking to validate for 2015, Arizona will be the only option as opposed to Arizona, Florida and Los Cabos as in previous years.  To give an example, Jennie Hansen came in 20th in Kona in 2013 and ran into illness issues in 2014.  She made the decision to get her body healthy rather than chase a Kona slot.  If this was 2015, instead of being able to pick up points in the fall to project a return to Kona, she is left with an uphill climb.  There is nothing wrong with having more competitive fields.  In fact, it is good for the visibility of the sport overall but by making it harder for newcomers to qualify for Kona, they are cementing today’s top-tier stars (and effectively eliminating something like Chrissie Wellington’s arrival in 2007 where she won Ironman Korea, picked up a Kona slot and then went on to win the Ironman World Championship all within 2 months).

Which leads us to point number two . . .

Stifling the Development of Up and Coming Pro Triathletes

WTC’s restructuring of points and prize money seems to cement the existing top tier of events without building anything underneath.  Compare, for example, ITU where there are three tiers of international racing.  Without a “minor league,” where neo-pros can cut their teeth, Ironman eliminates the opportunity for developing pros to get their first win and the sponsorships and recognition that comes with it; for example, Cait Snow (Lake Placid 2008), Jessie Donovan (Lake Placid 2012), Jennie Hansen (Lake Placid 2013), Amber Ferreira (Lake Placid 2014) and Bree Wee (Whistler 2014).  This creates a developmental void.  USAT isn’t interested in long-course athletes and WTC has announced that they are only going to promote Kona-level pros.  Someone or something needs to step into that void to ensure that there are new stars ready for the spotlight in 3, 5 or 10 years. 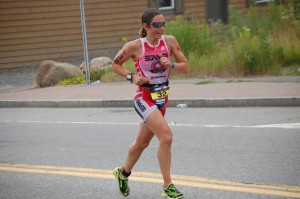 Amber Ferreira on her way to winning IMLP in 2014

Makes it harder for US Athletes to Get Their Elite card

Under USAT rules, one of the quickest ways to get your Elite card (which allows athletes  to get their Ironman Pro license) is to come in top 3 amateurs at an event with a prize purse of $25,000 or more.  With the elimination of prize purses at Rev3 events and 7 US Ironman events, there are far fewer opportunities for amateurs to get their pro cards.   This can inevitably price out some high-level amateurs due to the cost of traveling in pursuit of a pro card.  Having fewer, or more highly qualified pros, may ultimately be a good thing, but perhaps USAT should take a look at qualification standards to address the lack of long course races with $25,000 in prize money.

As Thorston Radde has reminded me there hasn’t been an announcement about European race (yet) but the initial announcement appears heavily biased against North America (this, along with the the missing 2015 regional championship race and no direction on whether pros can race races without prize purses also lends credibility to the argument that Ironman was rushed into making this announcement).  All of the races losing pro points and prize money are in North America; with 7 of the 9 races being within the United States.  Moreover, it is sad to see historic races lose their pro field. Lake Placid, Wisconsin and Florida are three of the longest running Ironman races on the circuit.   There appears to be no rhyme or reason as to why some races lost purses while others retained them.  For example, why did WTC pick Arizona over Florida or pick Whistler over Placid?

If there are no modifications to the European schedule, it would appear that WTC is keeping pro fields in places where they face outside competition, particularly from Challenge Family.  As an aside, this proves the value of the presence of pro triathletes at Ironman races — Ironman is keeping pro in races where they face external competition and eliminating them where they have a monopoly on the market.  It also confirms the general trend that WTC is shifting focus away from the North American market to target increased revenue growth globally.    These shifts suggest that WTC is driving towards a maximized internal valuation to Providence Equity and this short-term focus on growth may be a precursor to sale in the near term.