As I sit here just about 30 weeks pregnant, I realize that over the past few months, I’ve been asked quite a few questions about Ryan and I’s decision to get pregnant and how easy (or not easy) it was for us to conceive.  About three years ago I started to gain weight for no reason whatsoever.  I was training 15-20 hours per week, eating meticulously and getting told by doctors that I must be lying about what I eating or how much I was training — how awesome is that.  Finally when I mentioned to my GYN that my periods were really irregular, she referred me to a reproductive endocrinologist who diagnosed me with Poly Cystic Ovarian Syndrome (“PCOS”).  She recommended that I get a Mirena IUD.  While the insertion was incredibly painful, once the IUD was inserted it was wonderful.  I lost 10 lbs like magic.  Seriously magic, I did nothing and the weight melted away.  This past fall Ryan and I decided we really wanted to try for a baby, so I had the IUD removed in mid-September.  Bad news, I instantly gained 15 lbs (not awesome).  Good news was that even at 34 and with PCOS I was able to get pregnant pretty easily (within three cycles of starting to try). 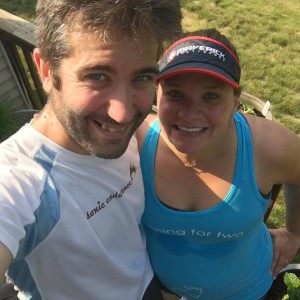 A few things I did that I think helped a lot (note these are things that helped us, this is in no way medical advice as I’m just a lay person who got lucky):
(1) Super healthy diet.  It was frustrating to gain weight, but I kept eating really well, which I think helped a lot;
(2) Exercise. I wasn’t training a ton but I was getting in 10- 12 hours / week of aerobic activity ;
(3) Supplements.  I’m normally not a huge fan of supplements (which often seem more like snake oil) but after a ton of research I went with Fertilaid  and
DHEA.  Fertilaid is designed to help balance hormones (particularly of women with PCOS).  I don’t know that it worked or was a magic bullet, but it definitely didn’t hurt.  DHEA helps the development of eggs in the ovaries and has shown to be effective in women with PCOS.  I also started taking a pre-natal vitamin.
(4) Excellent Resources.  I love Taking Charge of Your Fertility by Toni Weschler, MPH.  Its the best book I found on fertility (and I read a lot, whenever I encounter a problem, I’m ordering books to help address it).  Because of what I learned from this book (including fertility tracking, cervical mucus, predicting ovulation and super early signs of pregnancy) I knew I was pregnant before taking a pregnancy test.  I cannot recommend the book enough.
(5) A Good App for Tracking Fertility.  I used Kindara.  I have a few friends who also got pregnant using Kindara.  Its simple and not annoying like some fertility apps (Ovia, I’m looking at you) plus it has some great built in resources.
(6) Pre seed.   This sounds bizarre but its lube that helps sperm swim and stay alive for longer (even super sperm need help from time to time).  When we started using it, we got pregnant.  I’m not saying its the reason we got pregnant but it definitely didn’t hurt.
Things that weren’t so helpful:
(1) OPKs (Ovulation Predictor Kits).  We used OPKs in September and October and I don’t think they were super accurate.  I feel like my weird PCOs hormones caused false positives too early in the cycle.  We ran out of test strips in November and ended up getting pregnant based on tracking / the Kindara app.  At least for us, I think they were a waste of money.
(2) Online Support Groups.  Too much drama and craziness.  I tried looking to FaceBook groups and some message boards but they were just a bit too much (I’ve also found the same thing about pregnancy groups).  Lots of hormonal women all in the same place is not my thing.
When Ryan and I started trying in September, I totally expected that we were going to try for six months with no luck and end up with at least IUI.  In fact I had called the reproductive endocrinologist just to get an appointment on the book. Lo and behold we got pregnant in three cycles (Ryan would claim its super sperm).  While the PCOS diagnosis sucks, I think there’s a ton of hope, it may not be as simple as getting lucky on the first cycle, but I truly believe its possible without medical intervention.