KBG’s Note:  We previously wrote about the Ironman Foundation here and here.  Lots of people asked us about the Foundation’s 2013 tax returns, which have since become available — the 2014 returns are not yet available — and below is Ryan Heisler’s analysis on the 2013 returns.

Changes in the Foundation’s Organization and Accounting

Andrew Messick was announced as CEO of World Triathlon Corporation on May 31, 2011, replacing Ben Fertic. In a related change, this is the first year where Messick served in the capacity as Chairman of the Foundation; this role had been filled by Fertic through the 2011 filings of the Foundation. No person served in that role according to the 2012 filings. Additionally, Carola Ross replaced Jesse Dubey as Treasurer.

Also in 2012, IMF made the decision to switch from a Fiscal Year period to a Calendar Year period. This meant that their 2012 Form 990 only covered the tail end of 2012. This is the first year of the calendar year method of accounting.

Reviewing the full 990, which is appended at the bottom of this article, there are a few noteworthy items:

Who Does the Foundation Give To?

The five largest grants went to the following organizations:

Just missing the cut was the Louisville Sports Commission, which received $20,000 in 2013 and has traditionally spent tens of thousands of dollars on an “Ironman event” according to their returns.

Also, IMF donated $138,541 outside of the United States. $72,500 was granted in North America under the label of “grants to organization to assist in carrying out the exempt purpose.” An additional $66,041 was granted in East Asia and the Pacific as “disaster relief.” No name of the organization(s) where these donations were made is listed.

Reviewing the original questions from “Is Something Rotten in the State of the Foundation,” then:

In total, then, it would appear that the Foundation is moving towards further transparency. However, questions remain regarding the Board of the Foundation and the organizations it chooses to grant funds to. 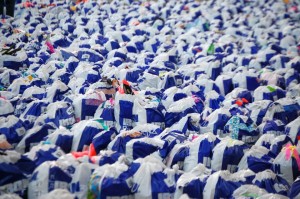