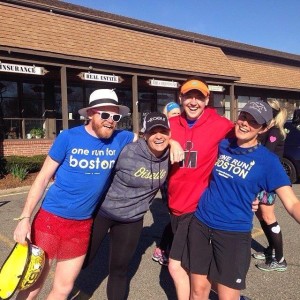 This weekend was a special one for me.  It wasn’t a race but rather the chance to participate in something bigger.   In 2013 after the Boston Marathon bombings two Brits — Danny Bent and Kate Treleaven — decided that they wanted to do something, anything to support the victims of the bombings and started One Run for Boston (“ORFB”).  Over the course of about 6 weeks they organized a cross country relay from California to Boston and raised $90,000 for the One Fund.    I was lucky enough to be part of that crazy first relay and ran through Bridgeport, Stratford and Milford on a hot, humid night last June.  Fast forward to a year later and Danny and Kate are at it again.  Same concept — a non-stop relay from California to Boston — but with the goal to raise even more money for the victims of the Boston bombings.  As an aside the Boston bombings caused many traumatic injuries that required amputation and prostheses.  Prostheses are incredibly expensive and require maintenance and replacement.  Children with prostheses require new models as they grow, often as fast as every six months.  These prostheses can cost in the hundreds of thousands of dollars over the life of the victim and ORFB is looking to help victims with these financial burdens.   So far this year runners have raised over $400,000 (you can donate to the cause here). 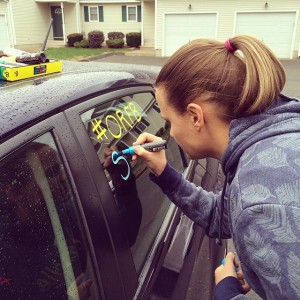 On March 16, 2014 runners left Santa Monica, California and headed east towards Boston.  After three weeks and 3,000 miles of continuous running, the relay entered Connecticut very early on Saturday morning.  The Friday before the relay entered Connecticut I spent a lot of time of the phone with local media trying to coverage of the relay.  As important as it is to raise funds, its also important to raise awareness.  I was lucky enough to make contact with local NBC and ABC affiliates, both of whom met us in Bridgeport on Saturday morning to report on ORFB.  You can check out their stories here and here.  I also spent time coordinating with the stages before and after mine.  While Danny and Kate do the big picture planning, the little details such as exact routes and hand off points are left to the stage captains.  I also had to take a few moments to decorate our sag vehicle.  Its important that our support car looks good (I also had to demonstrate to Shaun several time that the markers washed off before he would let me decorate the Subaru). 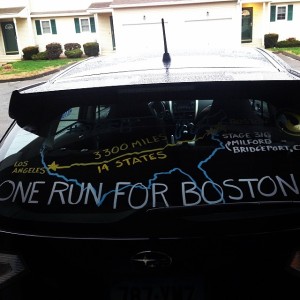 Run morning we arrived in Bridgeport at 5:15 a.m. to meet the news crews and the local police.  The police departments of Bridgeport, Stratford and Milford were kind enough to provide us with escorts for the entire length of our route.  There’s nothing like running down the middle of a busy road through city with your own personal police escorts (I also sent a basket of Zingermans baked goodies to each of the police departments as a special thank you to officers — Shaun told me that the officers might take offense if I sent bacon).  While Shaun discussed routes and logistics with the police, I spent a fair bit of time on camera.  After all the interviews I did in connection with the Boston bombings last April I feel like I’ve gotten pretty good in front of the camera.  While I may never be the fastest runner, by using the talents I do possess, I can hopefully raise funds and awareness for causes that matter to me. 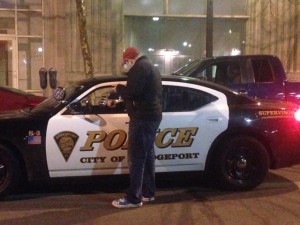 At 6:35 a.m. (after doing quick interviews for the 6:30 a.m. live news feeds) we took the baton from the Westport to Bridgeport runners and headed off the Milford.  When I say “we,” I’m not using the royal “we.”  For Stage 316 there were 15 runners of all abilities and walks of life making the trek.  We made the decision to run to together and pass both the baton and American flag among all of the runners as we covered the route.  We could not have had a more beautiful morning for the run.  When we left it was about 50 degrees and the sun was rising over the Long Island Sound (the film crews got some great shots of us running into the rising sun).  The route itself was fairly flat and make for very comfortable running.  The best part was the support we received along the route.  Motorist and pedestrians waved, honked and voiced their support.  Rather than getting pissed off that their commute was delayed, the people we encountered seemed happy to see us. 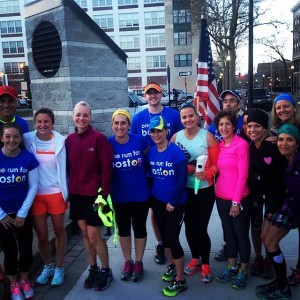 The best part of the run was the feeling of being part of something bigger.  Running is an individual sport.  Yes, you can train with others.  Yes, you can be a member of a club or a team.  When it comes to racing, however, its really you, your head, your legs and the clock all alone out there.  Its easy to get caught up in the sometime selfish and self centered mindset that surrounds pursing new goals, new distance and new PRs.  When running for ORFB, its not at all about the individual, its about something bigger.  I tend to get caught up in my head a lot and this was a great way to get out of my own way and just enjoy running for the sake of running. 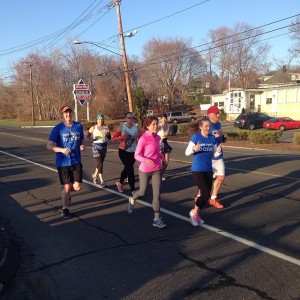 The miles passed by very quickly (its strange sometimes how slow miles can feel so much quicker than fast miles given the right mindset).  Just past the Milford Hospital we were greet with cowbells and cheer, met with Stage 317 and handed off the baton (the picture below is of both Stage 316 and 317 at the hand off point). 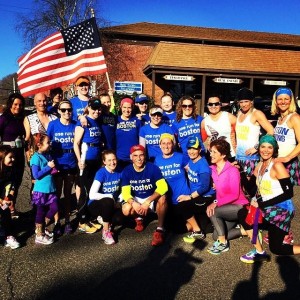 After hugs, crying and lots of pictures, Stage 317 set off to New Haven (check out Carina with the baton and the awesome Sonic Endurance visor).  Less than 24 hours after our stage, the baton entered Massachusetts and by Sunday afternoon made its way to the Boston Marathon finish line on Boyleston Street.  Its amazing to think that how over 2,000 runners came together, not only to raise money, but run the width of the third largest country in the world (check out NBC Nightly News’ feature on ORFB here, they wrap up the relay really well and you can see me running 8 seconds into the clip).  I am believer that if you are going dream, dream big.  I think this is just a fantastic example of dreaming big and shows that a single person (or small group of people) can do something absolutely amazing. 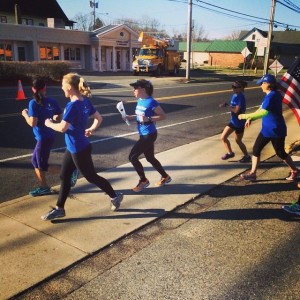 PS – One final shot of Danny in the sparkly red skirt. 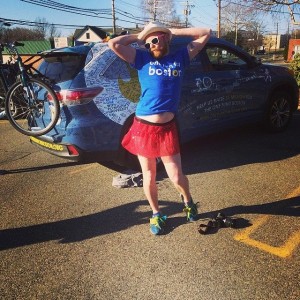 This is amazing! I came here from the Oiselle page as I’m hoping to join the team and live in CT, and after reading this I’m just so inspired!!! I ran Boston in 2007 and I graduated from Boston University so the city and the race hold a very special place in my heart. It is truly amazing that you did ALL of this and raised so much money! Consider me impressed and inspired!

I want to let you know that I nominated you for the Liebster Award. You can check it out on my most recent blog post. I hope you have as much fun with it as I did!! If you don’t have time no worries!!

Appreciation for one more great post. The place else might just any individual have that variety of information and facts in such a best means of publishing? I own a demonstration in the near future, and i am in the seek out these kinds of facts.