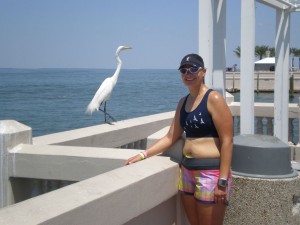 Sports bra (vintage Oiselle) and shorts for walking, but never for running.

Oiselle through their partnership with Kelly K. Roberts have declared June 24, 2017 as National Sports Bra Squad Day.  Its premised off the idea that ditching your shirt while running is empowering and that doing it in large numbers makes it easier (“ditching your shirt for the first time can be terrifying! There’s strength in numbers . . .”).  While I fully support the idea of female empowerment and wearing whatever the heck you want while running, for some reason the idea of a day dedicated to running in a sports bra makes me really uncomfortable. 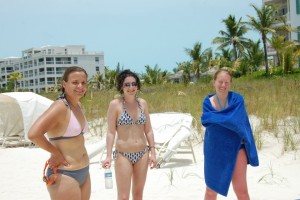 I’ve never had a problem with two piece bathing suit, but running in a sports bra is a different issue.

First off there are the logical reasons.  For lots of women religious and cultural norms dictate that they remain clothed while running. For other women fair or sensitive skin means covering up (take a look at the photos from Oiselle’s #BirdStrike project — many of those very fast women covered up while running in hot weather).  For still other women (myself included) there are practical reasons including have something with which to wipe your face or sunglasses.  Then there’s the uncomfortableness with the idea that doing one thing is somehow empowering for each and every woman (or its corollary that doing this one thing means you’re empowered).  That concept doesn’t sit well for me, what’s truly empowering is being comfortable enough with your body to wear whatever you want whenever you want whether its a sports, bra, short shorts, spandex or nothing at all.  Showing skin for the sake of showing skin doesn’t cut it. 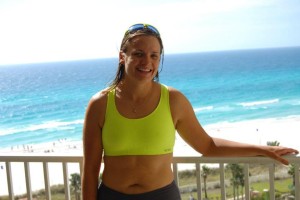 R&R before Ironman Florida (I raced in a tri top and shorts).

Despite these fairly rational reasons for feeling uncomfortable with the day, for me there’s something more that I just can’t put my finger on.  Yes, right now I’m as large as I’ve ever (non-pregnancy) been.  That doesn’t help with self esteem. But even when my body was less than ideal (which for me has pretty much been always) I was comfortable going shirtless in casual situations.  I’ve never had an issue wearing a two piece bathing suit (I don’t train in one because years of competitive swimming has drilled wearing a one piece for training into my psyche) or walking around / hanging out in shorts and a sports bra.  Even though I was o.k. exposing skin in some situations I have never, ever, ever, ran (or raced) in just a sports bra.   Honestly I don’t know why.  Even at my absolute fastest, including a very hot summer in Atlanta, I would wear a singlet and shorts.  Running in a just a sports bra has for some reason been the ultimate taboo. 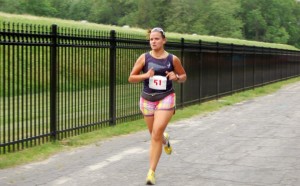 One of my fastest 5Ks but I still wore shorts and a singlet.

I spent quite a bit of time going through every picture I could find of myself and I found exactly one in which I was training wearing only a sports bra.  When Ryan raced Challenge Maine (formerly Rev 3 Maine and now Ironman 70.3 Maine) in 2015 I set my trainer up near the finish line and biked for four hours in a sports bra and bib shorts.  In some ways the fact that I’m so very uncomfortable with the concept of running in just a sports bra makes me want to force myself to do it.  Maybe someday.  Today I’ll do my long run in a singlet pushing Ivy in her Bugaboo Runner.  Inevitably I’ll need to stop at the port-a-pottie at least once and I’ll use the bit a extra fabric to wipe my face and my fogged up sunglasses.  But maybe, just maybe, one day in the future I’ll take Ivy out for a run in just my sports bra. 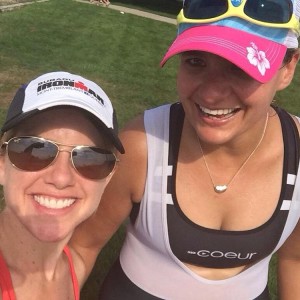 The only picture I could find of me training in just a sports bra (and bib shorts).