First a warning.  This blog post discusses female reproductive organs.  This makes some people squeamish and is too much information for others.  If you are one of those people, you may not want to continue reading.  You’ve been warned.

With that said, as part of my treatment for PCOS, my reproductive endocrinologist recommended that I get a Mirena Inter Uterine Device (“IUD”).  The Mirena contains a low dose of slow-release artificial progesterone that the device delivers right to the uterus.  The reason for the IUD was two fold, first the local release of hormones would like help to correct some of my cyclical hormone imbalances and the use of a Mirena IUD also may help reduce the risk of uterine lining cancers in women with PCOS.  The doctor also suggested it may help with weight loss.  I was scheduled for an insertion at 7:30 a.m. on Friday morning with my gynecologist and was given a prescription for misoprostol to use two hours before the procedure.  I was also encouraged to take ibuprofen to help with pain.

I arrived at my gynecologist’s office a little nervous but I knew I had a high pain tolerance so I wasn’t really worried.  I was wrong.  Very, very, very wrong.  In order to insert the IUD the doctor must manually open the cervix using a cervical clamp.  The doctor then measures the uterus and inserts the IUD through the cervical clamp.  Its as painful as it sounds.  Maybe more so.  I tried my hardest to be okay but I couldn’t help squeaking out in pain on several occasions.  After the IUD was inserted, I was nauseous, dizzy and felt like my insides were being wrung out.  It was a horrible feeling.  I could not even sit up.  It was a monumental task to eventually get up, get in my car and drive to work for a 10 a.m. client meeting.  I had no idea it would be this bad.  I made it through my meeting, dragged myself home and curled up on the couch in pain for the rest of the day.

I was also in a bit of shock.  When I had arthroscopic knee surgery (two weeks before the IUD insertion) I was given general anesthesia for the surgery, received IV pain medications in the recovery room and was given a prescription for thirty Vicodin for post op pain.  How many Vicodin did I actually need — none.  The surgery was essentially painless.  Yet with the IUD insertion,  I was given nothing for pain and I was experiencing significantly more pain that I had felt with knee surgery.

On Friday night, frustrated with how horrible I felt I sent out a tweet — “Lesson of the day – having an IUD inserted is more painful than a Brazilian wax.  #tmi.” 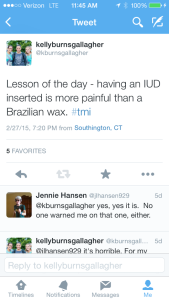 I didn’t really expect any response to my tweet and I was surprised when a flurry of replies came in from several women and, in particular, women who were endurance athletes.  The response was two fold: first that yes, IUD insertion is ridiculously painful and second why don’t we talk more about how female specific issues such as hormones, birth control and menstruation effect us as athletes?  Several of the responses to my tweet dealt with the fact that women chose to use an IUD because oral birth control made them feel awful; other responses centered on the fact that dealing with the cyclical nature of female hormones had an impact on training and racing (not the least of which is getting your period the morning of a big race).  Many of us spend thousands (and even tens of thousands) of dollars on race entry fees, coaches, nutritionists, gear and clothing but we don’t even think about how the fact that we’re female impacts our performance (for me hormones have had a huge negative impact on my body composition).  In fact many medical studies still ignore females.

This isn’t a plea for women to be given special treatment, but rather a question — we’re at a point in time when there are aerodynamic studies about the best placement of a water bottle on a bike yet its is almost impossible to find good resources (and discussions and support) concerning how female specific hormones and menstruation impact training and racing — shouldn’t this be a topic more of us are talking about publicly?  And should talking about being female really require the warning I wrote at the top of this post?

Too damn right. My Mirena insertion was not as traumatic as yours sounds, however I got mine about 10 weeks post partum and I think my cervix might have a more low key reaction to _just_ being dilated for an IUD (srsly, not even lidocaine?). With the Mirena I don’t get periods (yay!) but I do get mood shifts so it’s not complete smooth sailing. Knowing that swim workouts and races can be scheduled is fucking golden. We completely need some research on how women’s hormonal cycles affect performance and training. Have you seen how the research on intermittent fasting (all the rage in some diet circles) is mostly on male rats and the effects on femals rats are vastly different? Even the rat research is sexist.

Great post. Mine was like yours – done at 8 am before work. Dizzy, couldn’t sit up, incredibly painful, felt faint, and hadn’t taken any pain medication. The rest of the day I had to work and couldn’t wait to be able to leave at 6. Cramping for days after. I had no idea!

Kelly your post is awesome. I’m a lot more frightened for my own insertionnow…but thank you so much for sharing this. I’ve been prescribed misoprostol as well that I’m supposed to take the night before the procedure. The doctor advised that I’d want lots of Advil on hand and that I definitely wouldn’t want to go back to work afterward. She did mention that if I naturally am not dilated enough it would not be fun. Err…so fingers crossed for that tomorrow!

Ironically I had 3 of them over the years and didn’t have such a bad reaction….a very uncomfortable procedure but I recovered pretty quickly, fortunately….of course I ended up having long term issues with Mirena where the hormones caused me to gain weight and have lots of stomach issues, finally got it removed – for whatever reason the one without the hormones worked better for me. In addition to the issues you bring up, masters athletes like me are starting to deal with perimenopause which brings its own set of challenges (and again is mostly not studied and rarely talked about even though the numbers of female masters athletes is growing rapidly).

No, your post does not need a warning! (IMO) These things are REAL, and there is nothing that needs to be hidden. I know we feel like it should be…but discussion is the solution! I’m on my 3rd Mirena and I have had zero pain during any of their insertions. I was 11 months post baby on the first, and I expected pain with the second one 5 years later, but zero, zilch. So I think that maybe different women experience different pain levels, thus the confusion around medicating, paid meds, etc. I hope you feel some relief with it in time. There seem to be many post IUD experiences as well. Some bleed for a long time, some barely ever, and everything in-between!

Great post! My IUD insertion was painful too — almost a year post-partum and it brought back some serious memories of giving birth! So glad to see someone else sharing their experience – we women need to stick together and be open about these issues.

I had the EXACT same experience – only worse, I guess. I was in so much pain that my OB completely refused to put the thing all the way in. She made me come back a month later and did it under complete sedation, which meant fasting for 24 hours and being groggy and sick all day.

The thing that infuriated me was that it was only AFTER she tried it with no anesthetic or painkillers whatsoever that she admitted that “only about half” of her patients “make it” through the insertion procedure without Valium or some kind of sedation. WTF? If this were a regular procedure for men, it seems highly likely that it would be done under general anesthesia the first time, every single time. What makes people think it’s okay to just “try it and see how it goes” without at least providing complete information – i.e., yes, this is going to be REALLY painful, and yes, you have the option to be knocked out for it?

Grrr. I’m still mad about it. Never went back to that OB after that, and I don’t plan to. 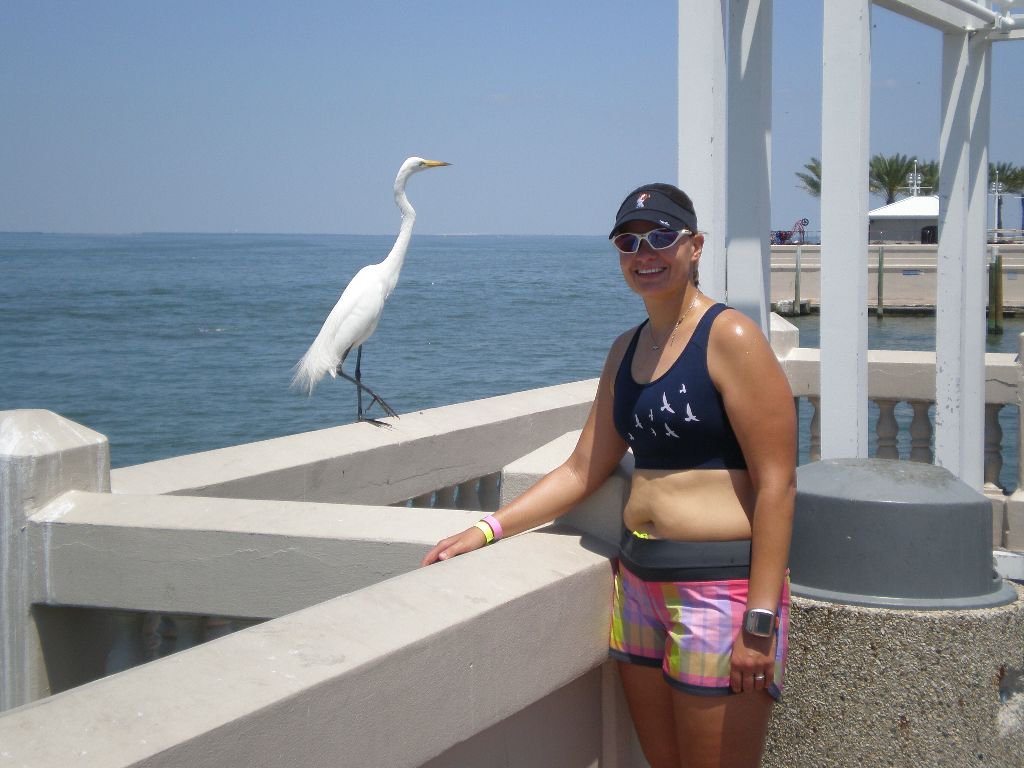