This past weekend Shaun and I headed up to Lake Placid, New York for a training weekend, mostly so I could preview the bike and run courses and try to gain some confidence prior to race day. We had split a condo just off the bike and run course with several other QT2ers but for various reasons, rather than having 10 people in the house, there ended up just being four of us. Not bad at all. 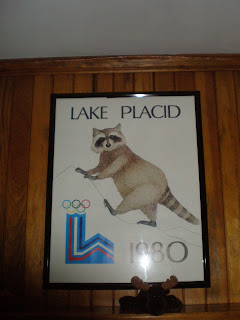 While the condo was super sweet, the weather, not so much. It was cool and rainy for the entire weekend. It started raining while I was swimming on Friday afternoon and didn’t stop until we reached Keene Valley on our way home on Sunday afternoon. Despite the crappy weather, the training was good. I was supposed to head out at 6:45 a.m. with Heidi to ride the bike course but it was pouring, so we waited 2 hours for the rain to lighten up a bit. Notice Brad and I sitting, waiting and watching the satellite on weather.com. 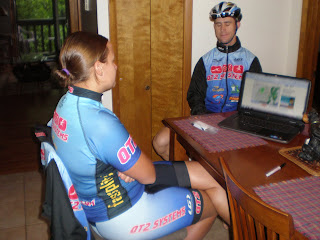 Just before 9 a.m. the weather finally got better and we headed out. No sooner than we were on the bike course, it began to rain, again. The rain wasn’t so bad, but the fact that the road was covered with water and you couldn’t see a lot of the pot holes, made for a bumpy ride. It lightened up against when we hit the Keene descent, but the roads were still way too wet to get aggressive with the descent. Other than a flat, the rest of the ride was pretty uneventful, it rained, there was sun, it hailed, there was sun, it poured, there was sun (you get the picture). While the steep little stingers at the beginning of the loop bothered me, I didn’t think the climb up Whiteface was that bad. Its just long and low grade. Sit and spin. 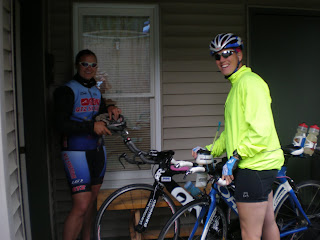 After the ride I headed out for a T-run on the run course. While the bike was a lot easier than I thought it would be, the run was much harder than I imagined. A big climb and descent on each loop plus continuous rollers throughout. I ran pretty solid 8:40s off the bike (although the cool weather and overcast skies helped).  Hopefully I’ll be able to replicate that effort on race day. Post run, Shaun (who was completely enamoured with the grill at the condo) grilled up a massive amount of veggies and salmon for Heidi and I. Pretty sweet. Now, if only Shaun can learn to cook (without messes) at home. 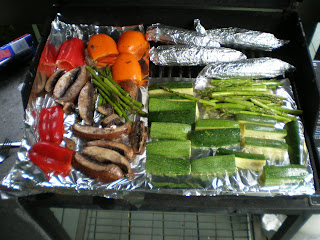 The focus of Sunday morning was a long Z1/Z2 run. I did a loop of the run course with some extra out and back on River Road. Again, it poured. By about mile 6 I was completely soaked. Good news is that the shoes and socks gave me no problems despite the wet weather. Had a pretty consistent run. Pretty much stuck to 8:40s with the exception of the long climb at the ski jumps. Shaun came out to give course support, which was nice. 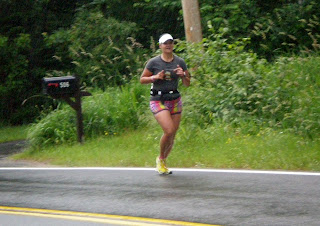 The run course is beautiful. Much nicer than Louisville or Arizona. I really love the view of the ski jumps heading back on River Road. If nothing else, the run on July 24 will be pretty. 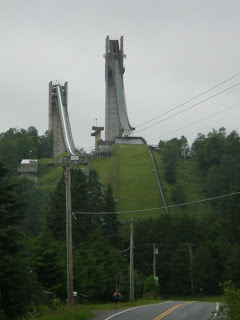 Post-run, I worked really hard to get my wet, sweaty body into my wetsuit for a final (recovery) swim in Mirror Lake. I was swimming by myself trying to follow the magical sunken line when an enormous rainbow trout swam right under me. I was a little freaked out. Fish usually don’t scare me, but this one was big. Post swim, we stopped for some lunch at the Sourdough Cafe (lobster and asparagus frittata). 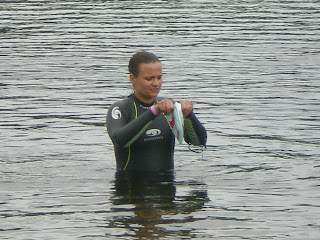 On the way to I-87, we made one final stop of the Keene Valley Farmer’s Market. I got spinach, asparagus, some material for nesting birds and a recycled fabric rabbit. Shaun got a massive chocolate chip cookie and a vat of strawberry lemonade. As you can see, Shaun very much enjoyed his sugar water (and is trying to hide the QT2 logo on his shirt with the enourmous cup). 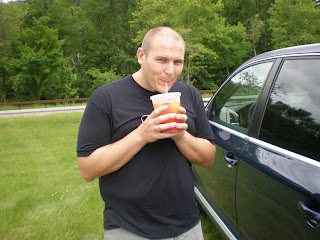 While the training was good, what was better is that I left Lake Placid with my head in a better place. I’ve been dreading this race for the last month and half or so. I “know” I am prepared, but I don’t believe I’m prepared. I think I made a little headway in the believe category this week. Now I just need to work on staying in the positive place and getting excited to race.