This past weekend Amanda Kourtz (who is ridiculously fast and is going to kick some serious ass at Ironman Texas) and I travelled down to The Woodlands, Texas (note the name of the town is “The Woodlands” not simply “Woodlands”) to check out the course for Ironman Texas.  Overall the Woodlands is a really nice area within walking distance of our hotel there was a Chick Fil-A, Sweet Tomatoes, Starbucks, HEB and Lululemon — pretty sweet.  As far as the courses go, there are some positives and negatives.

The swim course starts at North Shore Park (pictured below).  North Shore Park is about a 20 minute walk from the transition area in Town Green Park.  Its not a super difficult walk, but its something to remember for race day.   The swim itself takes place in Lake Woodlands, which is essentially a man made drainage canal (think Tempe Town Lake but warmer and narrower).  Its not the nicest water or water quality. 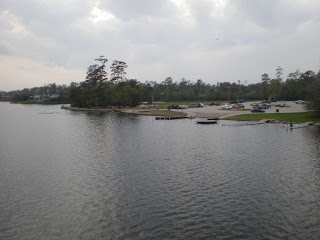 At the swim start, the lake is fairly wide, which should allow the two way traffic enough room to maneuver (the swim course heads south to South Shore Park and then there’s a turn around buoy).  There appears to be a potential problem when the course turn right towards Town Green Park.  The last half mile of swim is in a canal that may fit 5 or 6 people across.  With kayaks and race officials, it looks like it will be tight fit (especially for swimmers in the 1:10-1:20 range). 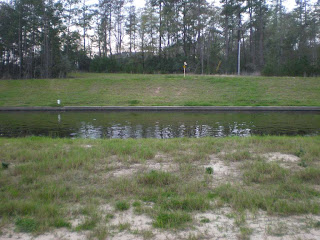 While the end of the swim course is tight, the nice part is that spectators can actually walk next to you as you swim (you can see the parallel side walk in the picture below). 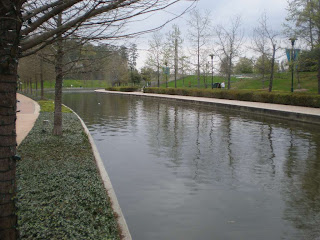 In addition to not being particularly clear, as of March 2, 2012, the water was also pretty warm.  Amanda and I guessed that the water temperature was already in the low 70s.  I think there’s no question that the swim will be wetsuit illegal.  The real question is how hot will the water get by race day.  I almost wonder if the temperature will go above 84 degrees and making it wetsuit illegal for everyone. 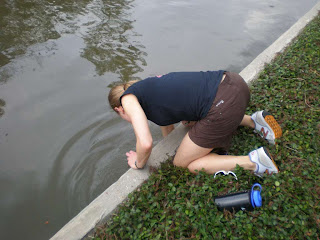 The bike course is a giant lollipop — you head out on the Woodlands Parkway, make a giant loop through the rural counties north of The Woodlands and then head back to transition on the Woodlands Parkway.  As a general note, I like the course.  Its more challenging that the Florida and Arizona courses but far less challenging than Louisville or Lake Placid.  For those familiar with the Patriot Half in Massachusetts, its a very similar course — constant elevation change but all really gentle grades.  I’ve heard comments about the wind and the heat.  When we rode it was in the 70s and humid so the heat was not much of an issue.  While there was definitely wind, it was more annoying than anything else.  I think this course has the potential to be really fast.  Our big gripe about the course wasn’t the course itself but rather the poor directions on the Ironman Texas website.  Here are the turn-by-turns we used (Amanda created these using the course map and Google Maps) broken into thirds (the course pretty naturally breaks into three parts):

This section of the course is rolling and pretty fast.  Woodlands Parkway is a straight shot out of the Woodlands towards FM 2978.  FM stands for Farm to Market, pretty much all of the roads are old farm routes.  Once you leave the Woodlands (after turning onto Honea Egypt Road) there is very little traffic.  While there’s not much traffic, most of the traffic consists of large trucks going over 60 mph.  While these roads are mostly two lane (without shoulders), several of the roads had a speed limit of 60 mph and a few has speed limits of 70 mph.  In the first section of the course, the pavement is fantastic, smooth as can be, the only thing you have to watch out for is road kill (and there’s a lot of it).  While this entire section is pretty fast, there’s a particular section on Osbourne Road that rolls down for a few miles making it very fast.  One other thing to be aware of in this section is that after FM 2978 there are almost no gas stations to re-fuel, so make sure to carry enough liquids. 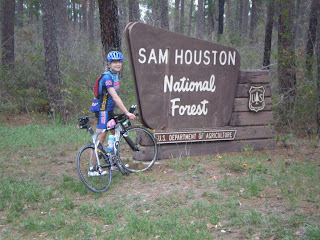 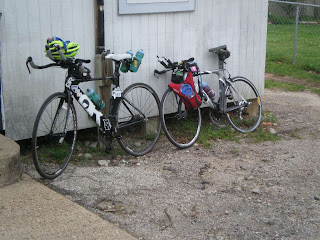 This is the toughest section of the course (or was the toughest section the day we road it).  Once we entered Grimes County the road turned from smooth pavement into chip seal.  Miles and miles and miles of chip seal.  It was a bumpy ride (I have the bruises on my forearms to prove it).  In addition this is the windiest and “hilliest” section of the course.  None of the hills are huge (we both rode the entire time in the big chain ring) and the wind isn’t crazy but its enough to be annoying.  In addition the area is VERY rural — we rode through what looked like a ghost town and saw farms for every animal imaginable (including llamas and antelope).  If you see a gas station, stop, you won’t see another one for a long, long time. 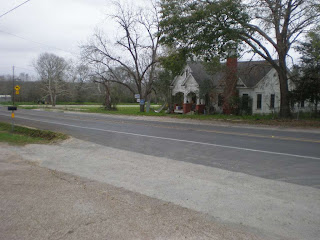 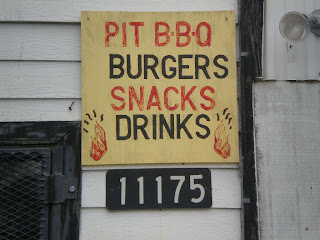 Like the first section, this section is fast (certain parts such as Spur 149 are very fast).  Once you leave Grimes County the roads become super smooth again and start getting a little more crowded.  As you head back on FM 2978 there is some serious traffic to contend with.  All in all though its a really nice route. 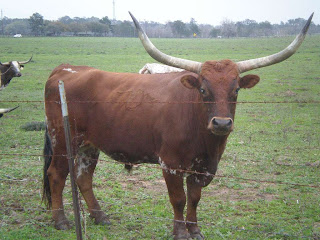 While the bike course takes you out into farm country north of The Woodlands, the run course is a triple loop that weaves around Lake Woodlands.  The course is flat (there are a few slight elevation changes but they’re barely noticeable) and its shaded in a lot of areas.  The course uses the extensive system of pathways around The Woodlands and the quiet streets of the East Shore neighborhood. 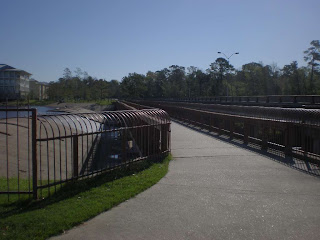 While I really liked running on the course on a quiet morning, I do have some concerns about the course on race day.  The course makes extensive use of the path system, which is only about 6 feet wide.  It seems like there’s potential for some serious crowding on the paths, especially on the third loop of the run.  In addition to being narrow, the paths are also fairly curvy, I wonder how aid stations will be set up.  I’m used to the massive aid station lining the street and I don’t think you can do that on the paths.  I tried to figure out exactly where the aid stations would be located, but it doesn’t look like that information is available. 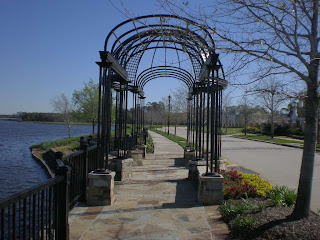 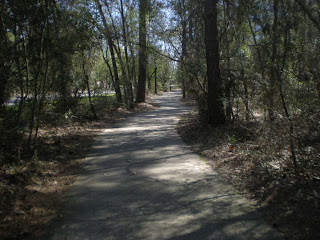 The run course ends on Market Street, which is a very cool “downtown” area.  In addition to your usual shops and restaurants, there is also a “Cupcakery.”  I will be having a cupcake at the finish line. 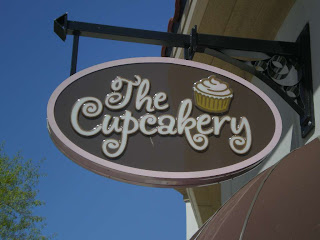 FYI the path system is only used for portions, while on Lake woodlands and panther creek, in north shore you run on the road, everything else is path system, and it does get crowded especially on the waterway.