In May of 2013, the World Triathlon Corporation announced the “Swim Start Initiative” for North American Ironman races.  As part of the initiative WTC eliminated the mass start at several races and replaced it with wave starts (Mont Tremblant) or modified time trial starts (Couer D’Alene and Lake Placid).  At Ironman Lake Placid I was able to observe (and video) the entirety of the swim start from the top of the Lake Placid Boathouse — this is a great spot from which to observe the swim. 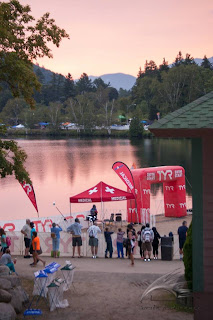 Here’s the video (at the bottom of the post) and my thoughts on the pros and cons of the modified time trial at Lake Placid.

1.  Self Seeding Works Fairly Well.  At the swim start there were several corrals and volunteers holding signs for projected swim times (sub 1 hour, 1:00 – 1:10, 1:10 – 1:20, 1:20 – 1:30, 1:30 – 1:45, 1:45 – 2 and 2 – 2:20.).  Before the swim started Mike Reilly gave a big speech on the importance of seeding yourself correctly.  For the most part I think people listened.  Rather than the normal fish and chips action of a Mirror Lake swim start there was a smooth flow of athletes.  There seemed to be minimal contact.  With the exception of a few swimmers (who can generally be seen way off to the left of the buoys at the beginning of the swim start) it appears that most athletes who seeded themselves as sub 1 hour could actually swim sub 1 hour.  From speaking with several athletes after the race, most of them had a really good first loop of the swim because of the seeding. 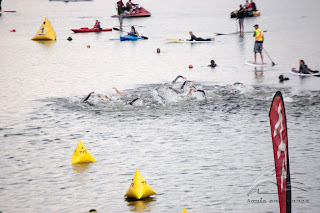 2.  More Needs to be Done for the Women’s Pro Race.  Both the pro men and the pro women had separate swim starts from the age groupers.  Pro men went off first, 3 minutes later pro women went off and then 3 minutes later the flood of age groupers began.  By only giving the pro women 3 minutes over the fastest of age group swimmers by the end of the first loop many pro women had been passed by age groupers and by the end of the second loop the women’s pro field was thoroughly mixed in with the pointy end of the age group field.  This isn’t horrible on the swim but having pro women mixed with age groupers on the bike is tough.  The pros have different drafting rules than amateurs and mixing the pros and amateurs together makes for a less “clean” pro race. 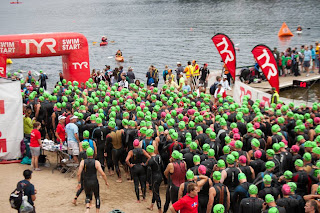 3.  The Trial Start Was Almost Too Slow. The male pros started the swim at 6:20.  Andy Potts completed his first loop at the swim in 23:07.  The last age grouper entered the water right at 22 minutes.  Had the age group start been a few minutes slower there would have been some serious congestion on the beach.  Now I understand that Andy Potts has one of the fastest swims in triathlon today but with Ironman increasing the number of participants per race its possible that the long tail will keep getting longer and that a time trial start on a double loop swim will cause some logistical issues. 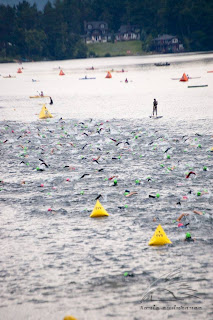 4.  Second Loop Congestion.  While the first loop of the swim was clean for most of the athletes, the second loop was less so.  All of the age group athletes were directed to keep ALL buoys to their right (not just the turn buoys) so that as pros could swim inside the buoys on the second loop and have clean water.  For fast age group swimmers this meant lots of traffic on the second loop.  For anyone who swam under 1 hour (or even 1:10) there were a significant number of slower age group swimmers to navigate through on the second loop.  If the goal of the initiative is swim safety, the fastest way to get a weak swimmer to freak out is to have a significantly faster swimmer swim right over him or her.  While I think the time trial start could be super effective in a single loop swim, I think there needs to be some additional tinkering with it for a double loop.