After months of preparation, Sunday July 24, 2011 was the big day. [Note: I don’t have pictures yet but will post them as soon as I get them.]

I was up at 3:30 a.m. for my breakfast of applesauce, banana, whey protein and Ironman Perform.  After scarfing down my meal, I went back to sleep until 4:30 a.m.  When the alarm rang for the second time, Shaun, Stacey and I got dressed and made the 1.5 mile trek from the hotel to transition.  First thing I heard in transition was that the water temperature in Mirror Lake was 77 degree — wetsuits were “optional.”  That is, if you decided o wear a wetsuit you would be ineligible for age group awards and Kona slots.  I’m not a big wetsuit fan so I made the decision right away to wear my swim skin.  I set everything up on my bike and then realized that I couldn’t pump my race wheels without help.  Luckily the women’s bike racks were right next to the pros and Tim Snow was kind enough to help me pump my tires (the Snowman rules!).  After the bike was set, I found Shaun and we headed down to the swim start.

The swim was rough, complete fish and chips.  I would say 80 to 90 % of the field were wearing wetsuits and I think that people tend to be a little more aggressive when they have neoprene bubbles around their legs.  I started the swim on the right had side of the buoys half way between the docks and the shore and tried to make a diagonal line to the first turn buoy.  Unfortunately I had very little control over where and how fast I swam, I pretty much had to do whatever everyone else around me was doing.  A few times I did a couple of strokes of butterfly just to create some room.  The entire first loop was pretty much mass chaos.  The clock read just over 40 minutes when I came out of the first loop — not so fantastic. The second loop was better.  I went inside the buoys and was able to follow the line out to the turn buoy, unfortunately on the way back in things got crowed again and I got pushed around more than I would have liked.  First and second loops were pretty much identical in time.  Overall the swim was pretty frustrating.  I swim decently in the pool but when I get to open water I’m considerably slower.  I’m not sure how to address the disconnect between the pool and open water.

I came out of the water with Amanda Kourtz (who would eventually go on to post the 8th fastest overall female time of the day and 3rd fastest female amateur time) and we ran up to T1 together.  I grabbed my bags and a volunteer a found a seat in the very crowded women’s change tent.  Pretty much all I needed to do was get my helmet, glasses, sock, shoes and race belt on and I was ready to go.  I ran out of the change tent and Shaun (who was volunteering as a bike handler) had my bike ready to go.  As I reached bike out there was a massive traffic jam.  Took almost 2 minutes just to get to the mount line and find a space to get on my bike and start rolling. 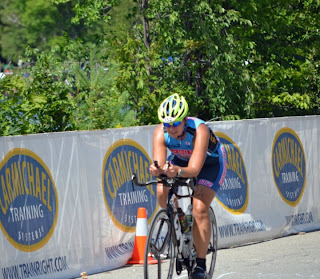 For the most part the bike went as planned.  I tried to maintain 160 watts on the flats and no go over 210 watts on the climbs.  As people were hammering past me on the first climbs out of Lake Placid I just kept reminding myself that I wanted to be able to run and that if I hammered the hills I wouldn’t be able to.  First descent into Keene was super fast and people were all over the road.  I tried to be as aggressive as possible but the crosswinds were wobbling me a bit so I had to hit the breaks a few times.  The out and back was solid, I stayed aero and kept my watts right on.  I was super lucky, there was a nasty accident in opposite direction and both bike skidded into my lane, I was the first bike to avoid the accident, I’m glad I was paying attention.  The climb back into Wilmington and then back to Lake Placid was tough.  I worked really hard to keep the watts low and the cadence up.  I actually did better on cadence for this ride than I do on most of my training rides.  It was fantastic heading back through town and seeing everyone.  The second loop was pretty much the same as the first, other than the fact that I stopped twice to pee (there were way too many people to pee on the bike, I didn’t want to hit someone) and that my back really started to bother me around mile 90 (my bulging disk was definately acting up).  At that point I decided to sit up and spin.  It wasn’t worth pushing and causing a serious issue.  I came back into town in a bit of pain, but I was really excited to run.  Hills are not my thing, all things considered I think I did pretty well.  Biggest issue is to climb better I need less mass, I realize what a big deal it is to hit race weight for IMFL.

Shaun grabbed my bike from me in T2 and immediately handed me off the Stacy who took me through the women’s change tent.  All I had to do was put on my running shoes, eat my banana and grab my nutrition.  Once I was out of the tent I did a quick back bend to help with the back pain and was off on the run. 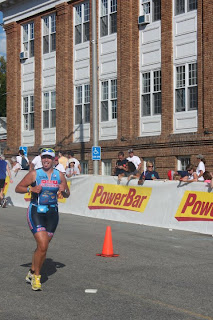 I was so happy to be running.  I flew out of transition and only slowed down when Pat saw me and started screaming at me.  First mile was a fairly fast 7:50 and then I settled in to 8:50s for the first few miles of River Road.  I did a really good job of grabbing and drinking Perform and ice at each aid station and started my walk breaks at mile 2.  I pretty much held high 8s / low 9s until the climbs back into town, even though I was going slower, I was still running.  Going through town was awesome and it was really motivating to see everyone cheering for me.  I was able to pick up the pace again and felt really good through about mile 19.  At 19 my stomach decided to stop co-operating.  From miles 19 through 23, I ended up in the port-a-potty several times, which killed the HR and brought up the pace a bit.  I started to feel better around mile 23 and was able to bring the pace down again, I ran up the whole hill into town and was super excited to hit the final out and back.  I completely took my time on the oval (Shaun says he’s never seen me look as happy as I did finishing).  While I know I can do better, I was super happy with my run, I was even able to pass 450 people on the run, that’s kind of ridiculous. 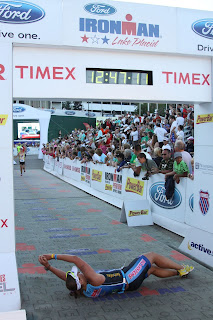 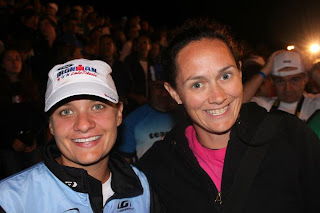