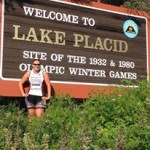 I just “had” to take a picture in front of the Lake Placid sign.

Its become a tradition for me to spend the last weekend in July in Lake Placid whether I’m racing or not.  2015 was no different.  I have lots of thoughts about this year’s race — particularly about the lack of professional triathletes (and the announcement of a pro women only race in Lake Placid in 2016), my experiences as a race day volunteer and about #50WomentoKona at Lake Placid.  I’ll get to blogging about those topics later this week, but first (and probably foremost) I wanted to share of the most memorable moments (and people and places and things) from one of my favorite places on earth. 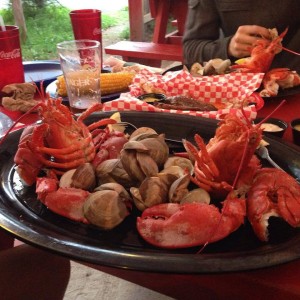 Lobster Bake for two at Tail of the Pup.

1.  Tail of the Pup.  In Saranac, just about 5 miles from Lake Placid, its worth the trip out of town.  I know seafood in the Adirondacks sounds bizarre but the lobster, clams and oysters are fantastic and the the barbecue is pretty spectacular too.  Ryan Heisler and I took Sean Murnane there Thursday before the race as a thank you for fixing our bikes.

Moira Horan. Meredith Atwood and me at Mirror Lake.

2.  World Collide.  I have lots of internet friends.  From time to time its nice to be able to meet up with them “in real life.”  Lake Placid was no exception I got to meet up with some of my favorite people — Meredith Atwood, Cristina Ramirez, Dark Mark and my pretend adopted little brother Sean. 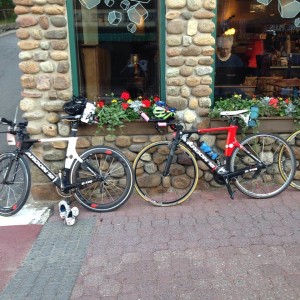 My Argon made a friend at Starbucks.

3.  Bike Love.  I ride my bike on the trainer.  A lot.  Part of it is time constraints, its just quicker and easier to get rides done on the trainer and part of it is safety.  I’ve had two nasty crashes in the last three years and the roads can be sketchy.  In Lake Placid I not only have awesome people with whom I can ride, there’s also fantastic riding.  I wish I could spend every weekend riding around the High Peaks. 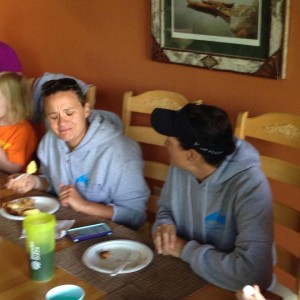 Stacey and I at the Sonic Endurance athlete’s breakfast.

4.  Stacey Jackson Miller.  This is my love letter to Stacey.  We actually met “in real life” at Lake Placid in 2011.  Since then Stacey has become a close friend, a partner, an adviser and one of my favorite people ever.  This year she kicked ass in Placid going 12:08.  I love Stacey to death and can’t wait to see what she does next in life and in triathlon. 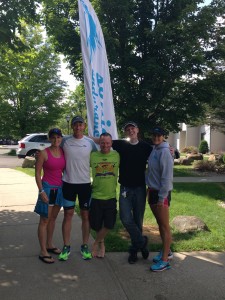 5.  Sonic Endurance.  For the past three years Sonic has been my baby.  IMLP was a great race for us. We had three PRs and three awesome debut performances.  All around awesome! 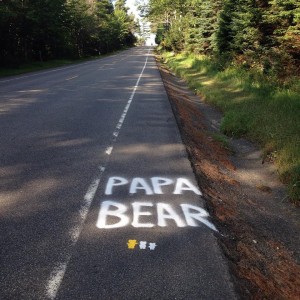 6.  No Chalkgate.  Despite my inclination for making a bit of constructive trouble, I avoided those issues this weekend and while I appreciated the artwork on the bears, I had absolutely noting to do with it. 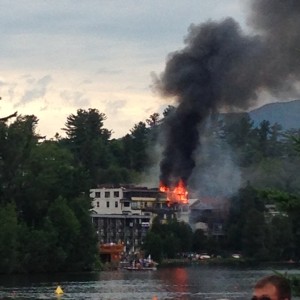 Fire the night before the race.

7.  The Fire.  Definitely unexpected and definitely a moment that stands out.  A recap of the 2015 race would not be complete without mentioning it. 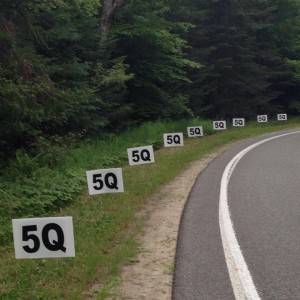 8.  #5Q Corner.  On Saturday night Ryan and I posted signs in support of #50WomentoKona at the 50 mile mark of the bike course and along River Road on the run course.  WTC did not take the signs down (hooray!) and they looked awesome on race day.  From what I have heard they were a great conversation starter (athletes would ask those with #5Q tattoos what the signs meant) and really helped spread TriEqual’s message of equality.  Good stuff all around. 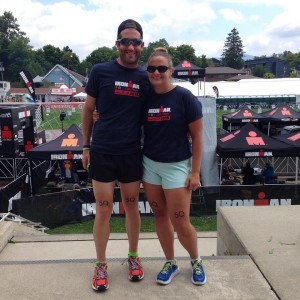 Ryan and I volunteering in the change tents.

9.  Volunteering.  I have lots of thoughts about legal issues when for profit organizations use “volunteers.”  That being said, I love giving back to fellow athletes.  Ryan and I both worked in the change tents during the race and we both had a fantastic time helping out the athletes.  I have to say, however, I did see some strange things in the women’s change tent — the strangest to me was a lovely athlete who put on a fresh thong before changing into dry tri shorts.  I don’t know why anyone would want to wear a thong under normal circumstances, but under tri shorts it seems like a recipe for horrible chafing. 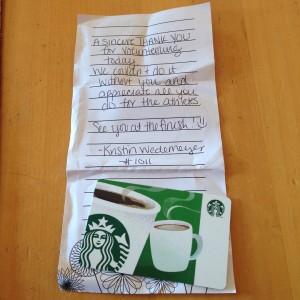 A special gift from one of the athletes.

10.  Awesome Athletes.  The best part of Lake Placid, or of any race for that matter, are the really awesome athletes.  Most of my favorite people in life are triathletes and while they can be super dorky (wearing compression socks everywhere), they also tend to be some of the nicest, most genuine people you will ever meet. 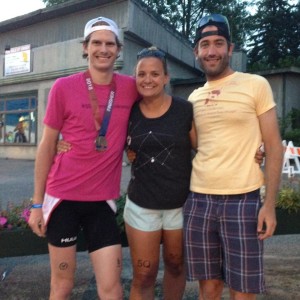 Two of my favorite boys — Ryan and Sean.

I believe the woman you saw putting on the thong was Stephanie, one of the women I was staying with. It was a memorable moment for a lot of different women in the change tent. As was rather laughable when I heard about it.