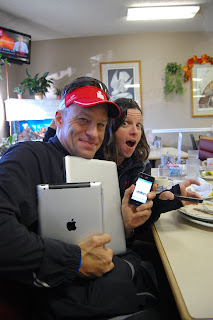 Less than 24 hours until race start.  The weather today is cooler (high in the low 60s) and the wind is still pretty strong.  The waves looked pretty choppy this morning as well.  I’m hoping they calm day a bit by tomorrow morning.  I think my biggest fear right now is the swim.  I’m not worried about my swimming ability.  I’m worried about getting seasick if I get thrown around a bit in the swim.

Day began in the usual pre-race fashion with a QT2 breakfast (3 pancakes, 2 eggs over easy and 2 slices of white toast).  Charlie was so kind to join us for breakfast even though he was constantly distracted by his four different electronic devices — laptop, iPad, iPhone and cell phone.  I thought Shaun was bad with his doot doot deet, but Charlie is much worse.  At least Shaun doesn’t bring his laptop to breakfast. I wasn’t feeling fantastic at breakfast.  The smell of syrup was making me a bit nauseous.  I hoping it was nerves and that it passes quickly.  After breakfast we packed up our T1 and T2 bags and headed to bike check-in.  I like to get my bike and bags checked in as soon as possible just so I don’t have to worry about it.  When racking my bike there was only one other bike on my rack and of course it was right next to my bike (# 188) and racked the wrong way.  When I re-racked her bike I noticed that her chain had slipped off to the inside of her crank and fallen off the rear derailleur.  I fixed her chain and ran the bike through its gears.  I’m hoping I can catch her tomorrow morning just so she can double check that its geared correctly. 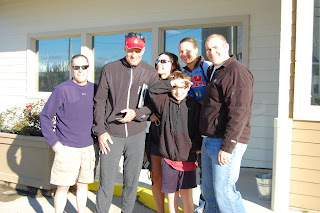 After dropping of the bags, Shaun got some alone time and my mother and I headed out to drive the bike course (she drove and I navigated and took mental pictures).  As anticipated the vast majority of the bike is pancake flat.  There some nasty pavement on the out and back on Blue Springs Road and a couple of rollers on the back side of Highway 20, but nothing serious.  The was still some serious wind on the interior of the bike course (probably in the 20 mph range).  I’d like a fast bike so I’m hoping it settles down a bit by tomorrow. After lunch (Chick Fil-A grilled chicken sandwich and fruit cup) I headed back to room to try to relax for the afternoon.  Its tough to get into my own little space when both my mom and Shaun’s mom are around. I really want to burrow into my own little hole.  Its really tough for me.  I’m more nervous today that I have ever been before a race and I’m better staying inside myself rather than try to play with other (unless they want to talk shop but no one seems to want to talk race execution with me).  Going into Lake Placid I had no idea what kind I time I was capable of putting down for an iron distance triathlon. I had never executed a marathon well, let alone a marathon preceded by a 2.4 mile swim and 112 mile bike.  Ironman Lake Placid was a little bit of a revelation for me.  My swim was fine, I paced my bike well and I was actually able to run the entire marathon.  I had an open marathon PR by 50 minutes.  I was beyond excited to finish an Ironman in daylight and felt like I was actually capable of going (relatively) fast over 140.6 miles.  Now I know that I am capable of executing a solid race, in some ways the pressure is on for Ironman Lake Placid to actually live up to the race plan. 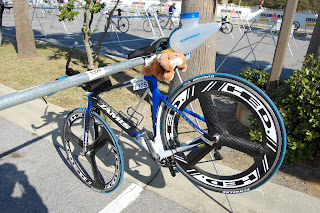 So here’s the plan:

Bike (170 Watts) — Its tough to predict a bike time because of the wind.  170 Watts in a no wind situation is well over 20 mph for me, but I don’t think that will be case tomorrow.  Doug guessed around an average of 19.1 mph and about a 5:55 bike split.  As the course is flat, the goal is to settle in to 170 watts and hold it.  I should be able to stay aero for the entire bike barring any saddle sore issues (lanced it last night — I know way too much information).  For the last 30 miles at Lake Placid all I could think about was running, I just want to be able to get off the bike and run well. 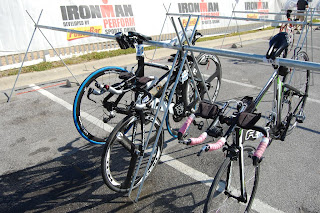