Seeing that I begin training for the 2013 season tomorrow (November 26, 2012), I thought I should finally post my race report from Ironman Florida.  I was not feeling completely prepared as I went into Florida this year.  After dislocating my shoulder and partially rupturing my IT band at the end of July I took a few weeks completely off and then slowly began biking, running and eventually swimming again (I didn’t get back into the pool until the middle of September).  Notwithstanding my bike crash in July, my year was generally inconsistent.  I dealt with asthma and allergy issues in the spring, a nasty bacterial infection in June, lots of travel for weddings and work and a fairly tough time at home with Shaun struggling with mental health issues.  Whereas everything went right in 2011, I felt like everything went wrong in 2012.  I was able to put together a few solid blocks of training to Ironman Florida but I felt as if I didn’t have the miles (especially on the run) that I would need to have a really solid race.

The swim was rough.  For the 2011 race, the Gulf of Mexico was fairly flat, in 2012 not so much.  From the picture below you can get a little bit of an idea.  In 2011, I could see clear to the bottom of the Gulf, including colonies of rays on the bottom.  In 2012, I couldn’t see my hand in front of my face.  The amplitude of the waves was about 2 to 3 feet, just enough to make it impossible to sight buoys if you breathing at the trough of the wave rather than the crest.  People were getting tossed fairly hard and I took a foot to the face twice.  Once my goggles were kicked off and the second time the guy into front of me got pulled back by the backwards pressure of a receding wave and his foot hit my jawbone.  While the ocean was rough, this was my fastest IM swim ever.  While I would have like to go closer to 1:10, the time wasn’t horrible. 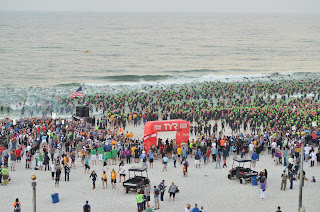 I had a pretty quick T1 and then a long run from my rack position to the bike out.  I decided it would be a good idea to run in bike shoes.  Not smart.  I took a sharp corner to head to the bike out, slid and crashed into the barrier.  I have to be the only person who can crash with their bike without actually being on it.  I landed hard on my left knee and ankle, twisted my right knee and lost the skin on both knees.  Thankfully I was holding the bike by the seat so I just let the bike go and didn’t get tangled up with it.  My knees hurt so I walked slowly, mounted and figured I’d see how I felt on the bike. 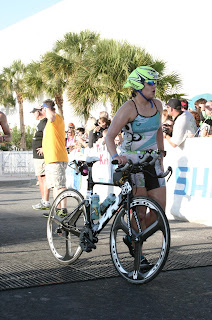 The first few miles on the bike were painful.  I could my knees and my ankle swelling and there wasn’t anything I could do about it.  Then there were the packs.  There are always packs at Florida and with relatively calm (non-windy) conditions to start the bike it was hard to avoid them.  I would work to pass large groups and then not be able to hold the pace and would end up being re-consumed only to be forced to re-pass.  At about 30 or 40 miles, the wind started to pick up.  It wasn’t bad, it was just annoying.  By the halfway point I knew I was having issues with my legs.  My lower left leg and foot had swelled up the the point that I needed to take my foot out of the shoe and something behind my right knee was pulling hard.  I kept pushing but I just hurt.  I was not a happy camper.  I knew I had the ability (and the conditions) to have a serious bike PR and my body was not cooperating.  By about mile 80 I couldn’t keep my feet in my bike shoes any more and just decided that I would be better off with my feet on top of the shoes.  It wasn’t the most efficient setup but it was the most comfortable.  While I was trying to setup my shoes, I failed to drop back fast enough and had a penalty called.  I explained to the ref what happened and she said ok, but I wasn’t sure if I actually was given a penalty or not.  Heading into T2 I decided that I should serve the penalty out and hung out for 4 minutes in the tent.  My unofficial final bike time was 5:44, with the penalty it was 5:48.  A PR from 2011. 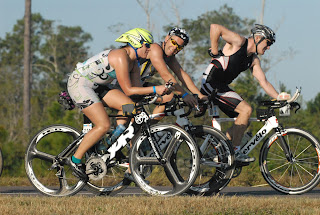 When I got into T2 I found Shaun and showed him the blood down the front of my shins.  I wasn’t sure if I could run but figured I needed to give it a shot.  I took my time in T2 flexed my knees a little and headed out on the run.

I knew from the start this was not going to be a PR run.  I was still and knees, left ankle and right hamstring hurt.  I figured it was the last race of the year and I wasn’t going to hurt myself any more by running.  The run went better than I thought it would.  I get kind of perky and happy on the run and this run was no different. I wasn’t able to make my legs goes fast, but I was able to keep running.  I even made the race recap video (check it out below, I’m at 4:25 of the video).

At about 18 miles, I realized that I would be able to come in under 12 hours.  While it wasn’t the PR I hoped for, it was a lot better than a DNF.  The last few miles were hard, my knees just hurt and instead of smiling I had a huge grimace when I crossed the finish line.  As soon as I crossed I found a chair and asked to be taken to medical to deal with my knees.  Shaun found me while I was waiting and helped to get me cleaned up and home.  Overall it was my second fastest IM and there were some definite positives.  I’m just hoping that after all the bad luck in 2012, I’m due for some good luck (or at least non-interference in 2013). 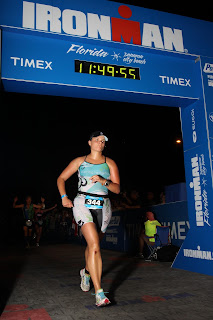