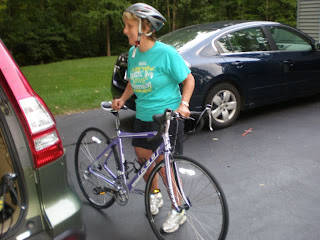 We had two new bike come into our lives last weekend — a Felt ZW95 and a 1976 Raleigh Record.

The Felt was a birthday present for my mom.  When I asked her what she wanted for her birthday, her first response was “some exercise bands.”  Really?  That’s not a very fun present so I pushed her a little bit more.  Finally she told me that she really wanted to have a bike she could ride around the neighborhood and on the bike path near her house.   We looked at several picture of bikes and she thought she wanted a hybrid.  On Saturday Shaun and I headed up to Fast Splits in Newton to drop off the CD.01 and we decided to look at bikes for my mom as well.  Fast Splits doesn’t carry hybrids but they did have a purple ZW95 in stock.  The bike has “safety breaks” on the base bar (as well as normal breaks on the drops) so I thought my mom would be comfortable with it.  I decided to take a chance and we bought it for her.  It was a good call.  She loves the bike (especially the fact that its purple).  I went over last night and explained how the bike works, how to shift, pump tires and general rules of the ride.  My mom and I then went on our first bike ride ever.  She took it really easy until a lady on a hybrid passed her — I guess that set something off because she put down the hammer to re-pass.  I’m really excited that she’s so excited about the bike.  Hopefully someday she’ll be able to keep me company on my rides. 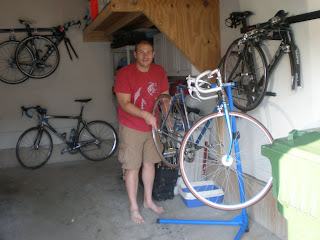 In addition to the Felt, Shaun “found” Raleigh Record from 1976 in my parents’ basement.  It was my dad’s bike and I don’t think its been ridden for years.  Pretty much everything is shot on the bike, but Shaun loves it.  He’s now hunting down vintage parts (including a 5 speed cassette) to re-furbish his “classic.”  It should be an interesting project and I’m curious to see the end results.

Its nice to see how two bikes can make two very different people so happy.