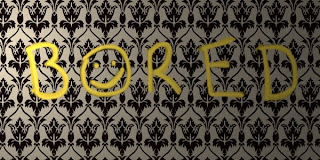 While I’m not at the point of shooting out our walls, I am bored (as a side not if you have not watched BBC’s Sherlock, its totally worth the time).

After Ironman Florida, I made the decision to shut things down training wise for a while to let my body heal.  The goal was to focus on reducing stress and to get into a position where my body responds to training and nutrition in a productive manner (the theory was stress, including training stress reduces testosterone and increases cortisol, both of which lead to weight gain).  Instead of reducing stress, November was incredibly stressful and I have been crawling up the walls over the last few weeks.  Most people have their “thing” or “things” that make them who they are.  Part of my “thing” is training and racing.  Not only is it a major part of my identity, but training also helps me keep my mind in check.  Without training I lose both my identity and my major stress coping mechanism.

What was supposed to happen was I would use my extra time to explore other ways to manage stress such as gentle yoga (really rolling around on the floor), meditation (sitting and counting down the seconds until I can move), breathing exercises (I can get competitive at this too), walking and easy swimming.  Through “mindfulness” I was supposed to learn how to better manage myself, my stress levels and my hormonal response.  The problem with all of these activities is I have no idea how to calm my mind.  My mind is always going in a million different directions.  I don’t see things one or two steps ahead, I see things fifteen steps ahead and with multiple alternative endings.  Telling me to quiet my mind is likely telling a Labrador puppy to stop wagging its tail, I have absolutely no idea how to make it happen.

Instead of quieting my mind I spent a lot of time in November thinking about all the things I can’t control and how I feel like a failure (in my mind I was a failure as an athlete, a failure as a human being as Shaun and I do not have children, a personal failure as I was making myself and Shaun miserable and a physical failure as I cannot control my weight and body image issues).  As a person, I need a goal in life, something I that requires thought, attention and effort.  I have lots of things in life that require time but goals are special.  Doing nothing and trying to relax is not a respite but rather the opposite of a goal.  Instead of creating peace, it created several episodes of sobbing hysterics on my part about how lost and bored I felt (Shaun was not happy to be dealing with me as a massive mess).  Unfortunately I am a bit of a junkie and while I recognize that training and racing can be a crutch and an addiction, right now its one that I feel I really need.