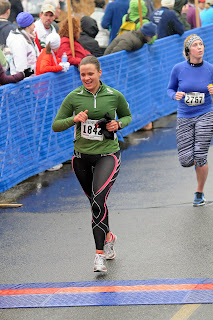 I live in Plantsville, Connecticut, the Hyannis Half Marathon takes place in Hyannis, Massachusetts (on Cape Cod) about a 2.5 hour drive. Being from New England (or maybe being me), I am convinced that any race within 3 hours that starts at 10 a.m. is totally drive-able on race morning and there’s no need to stay overnight closer to the race. As such, I decided that so long as Shaun and I left by 6 a.m., we’d get to Hyannis with plenty of time to pick up packets, use bathrooms and warm up pre-race. Unfortunately I forgot to account for the fact that overnight, a few inches of icey snow feel in Connecticut and Massachusetts, making a 2.5 hour drive take almost 4 hours. Due to my ppor judgment, we arrived in Hyannis at about 9:30 a.m., used the bathroom at a Dunkin Donuts, raced to get our bibs and tried to find a spot at the crowded start line. I had no time for my normal, coffee and three trips to the bathroom pre-race — not good.

Once at the start line I tried to line up between the 7 and 8 minute mile signs, but I couldn’t even get on the road and to settle for a spot in the parking lot. The gun went off and it took about 2 minutes to cross the start line. As soon I crossed the start line, I hit start on my Garmin and began weaving and dodging, trying to find some open road and a comfortable pace. As I hit the first mile marker my pace was 7:56 min/mile with a heart of 159 BPM, a little slow, but not bad considering the crowds. By the time I hit mile marker 2, the pace was down to 7:45 min/mile. At this point other than some wet snow and a little wind, I felt really good. I kept ticking off high- 7s and took my GU at mile 5. At that point I realized I was likely to have a 10K PR as well and lapped my time – 48:22 – at the 10K mark.

While I was excited about the 10K PR, I wasn’t happy with the fact that my stomach had started grumbling and gurgling, which were not good signs. I forced to stop at mile 7 and use the port-a-let (it was only after the race was over that I realized that my Garmin auto-stopped when I stopped to use the toilet). After waiting for was seemed like eons, the port-a-let finally opened up as I tried to take as quick of a toilet break as possible. While I initially felt a little better, within a mile my stomach started gurgling again. While my legs, heart and lungs were more than wiling to hold 7:40s, my digestive system did not want me to leave Zone 2. From miles 8 through 12 or so I averaged about 8:25 minutes / mile and a heart rate of 156. My digestive system got so bad, I was forced to stop again at mile 12, yes mile 12 and use the port-a-let again.

It was really disappointing. I was cable of running in the low 1:40s, but because of poor planning I wasn’t able to execute. The only positive is that I get to run another half marathon on April 3 in Danbury, a 40 minute drive from my house. You can bet that I’ll be arriving at the race site very early on race morning.