For some reason over the past 9 months I have gotten into the horrible habit of wiping out and destroying my knees on a pretty regular basis.    It started at Ironman Florida in November when I crashed in T1 (that’s what I get for running in bike shoes).  My knees were both twisted and scraped, which made for an interesting run.  At least I looked bad ass crossing the finishing line.

At court in January I slipped while wearing heels (yes, I know, heels are not cool) and smacked both of my knees on the marble floor. No blood, but lots of pain and swelling.

In April I was running along Lake Erie when I completely wiped out.  I was wearing tights for the skin loss was kept to a minimum but the swelling was nasty, especially considering that immediately after falling we got in the car and drove home.  Eight hours in the car was not fun.

I made it just over two months until my fourth fall.  Running in Milford at night as part of the One Run for Boston I tripped and slid across the pavement on my knees.  I got up and continued running.  Once again, made for some bad ass looking pictures but it took forever for the skin to heal.

Four falls in eight months apparently wasn’t enough.  I really wanted to go five for nine.  Yesterday, pretty much right in front of my house, I tripped on absolutely nothing and slammed into the sidewalk.  In addition to the knees, I tore up my elbow as well.  This was probably the worst fall.  all of the new skinned was torn off and the cuts on my left knee were pretty deep.  I was not a happy camper.  When I came home with bloody knees (and socks and shoes and shorts) Shaun yelled at me and told me I wasn’t allowed to do Ironman Mont Tremblant.  I think he’s relaxed from that position but I know he’s worried that I’ve done long term damage to my knees.

The only positive of the last fall is that I’ve learned that vet tape is awesome for keeping bandages on so I can continue to bike and run.  Hooray!  On a more serious note, I am somewhat concerned.  Most adults don’t start tripping over their own feet at thirty-one years of age.  Its strange that I am become such a huge klutz and I’m hoping its just a string of bad luck. 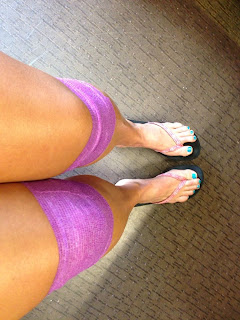