This past Saturday was the Hogsback Half Marathon.  It was my fourth year as race director and in my eleven (holy crap, eleven) years of race directing, it was by far the hardest race I’ve ever directed.  When we found out we were pregnant back in December, we knew that Ivy’s arrival would be close to the 2016 race. In blissful ignorance, we didn’t think it would be a big deal.

My last few weeks of pregnancy and the first few weeks of Ivy’s life were tumultuous and sleep-deprived.  As a consummate planner who loves sleep, this has hit me hard.  I would intend to do a lot of things — send an email, schedule Facebook posts, get checks out to vendors — and would be thwarted by a 7 lb nugget who demanded my complete attention.  That being said, thanks to help from other (particularly Ryan, Shaun and my mother) we were able to put on a solid race and to raise $9,042.50 for Running for Rescues.  Here are my thoughts on what went well, what needs improvement and what I’d like to do in 2017. 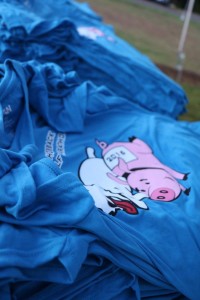 Race shirts, ready to be handed out to runners.

The National Anthem – Our dear friend Shira had asked me last year to sing the National Anthem. In our haste of packing, we forgot the speaker system that would allow for it. This year, we wanted to make sure that Shira would have that opportunity. She absolutely crushed it. It was also something I wished I had taken video of: all of the runners joining Shira for the last few bars. It made for a great start to the day.

Pacing Groups – For the second year in a row, we had a fantastic group of pacers. All but one came in right on time. But in addition, the enthusiasm on-course from this group helps keep spirits high all day long. A massive thank-you to Rachel Tambling for setting this program up, and thank you to all of the pacers for their excellent work.

Early Start – We have offered the early start to runners expecting to finish slower than 2:30 for the past three years. This early start allows us to clear our course faster, which helps with our permitting the race, while also allowing our slower participants to finish with the large band of runners from the regular start between 1:50 and 2:10. We hear from these athletes every year how much it means to them to finish with spectators and more runners around. We aim to be the most inclusive race in Connecticut; this start is one means for us to reach that goal.

Aid Stations – Plenty of Gatorade, water, and Huma Gels. Gatorade, through the RRCA, provides us with product at no cost. Meanwhile, Huma provides us with gels at wholesale cost. Their discounts and donations help us keep our race prices lower and donate more money to Running for Rescues. All good things!

Volunteers – We could not possibly pull this event off without the support of our volunteers. From manning aid stations, to providing course support on bikes, to helping out with the finish line and the celebration, our volunteers are a shining point of our races. We can’t thank them enough for all of their dedication and hard work year after year.

ASAP Tees, AllSportsEvents, SassyMama’s and soundRUNNER – This year, we made some changes: we moved our location for packet pickup from West Hartford to soundRUNNER in Glastonbury; changed to a different screenprinting vendor; had a new company bake our finish line centerpiece cake; and switched our timing company. All of these great small businesses have been a joy to work with. ASAP has done our shirts for all three races this year and will continue to be our destination of choice for their high-quality work. soundRUNNER was kind enough to host us on two nights the week before the race and offer our runners an excellent in-store discount during packet pickup. SassyMama’s in Southington has done multiple birthday cakes and the race cake for us; all can agree that they’ve done a fantastic job. AllSportsEvents work on the timing is impeccable; they are responsible for adding names on bibs this year. We look forward to working with all of you in 2017!

Ryan – To put it bluntly: without him, there would not have been a 2016 Hogsback Half Marathon. We traded roles a lot: he’d write e-mails, finish permitting, or ensure our t-shirts were ready from the screenprinters while I had Ivy; he’d play with her while I was handling baking, finalizing hat orders, and handing out t-shirts at early packet pickup. I could not imagine having pulled this event off without his love and support. 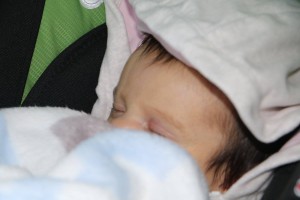 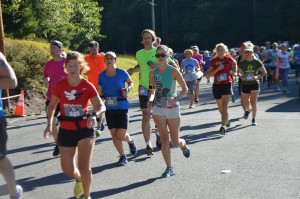 The Not So Good

Needing Two Early Packet Pickups – We planned on having a packet pickup only on the Sunday before the race this year. Unfortunately, our bibs wound up arriving on Monday…the day after our packet pickup. soundRUNNER was excellent to us and allowed us to come back on Thursday for a full-blown version of packet pickup. Nobody complained, and we registered a fair number of people on both Sunday and Thursday, so all turned out well; still, we’d want to make sure that we only have a single packet pickup for both our and runners’ sakes next year.

Early Start – The unfortunate flip side of the early start is that it creates a host of issues timing the event; this is why early starters receive a 4-digit bib versus a 3-digit bib. Every year, however, we have racers that decide on race morning to join the early start; without changing bib numbers, this results in the runner receiving an incorrect time. This year, our first early finisher crossed the line well under two hours. This causes problems with our event permitting; we have specific times certain intersections are supposed to be open for, and runners running “ahead of the race” by leaving in the early start and running quickly result in permitting issues for the following year. This year, we allowed early start runners who finished faster than 2:20 to keep their finishing time, but to be removed from awards; next year, this will likely need to result in a disqualification.

Vandalism of Aid Stations and Water – On race morning, we arrive to the dam; we unpack the van of all registration and finish-line materials, and Ryan heads out to drop off our six aid stations. This year, our Mile 2 aid station was backed into by a pickup truck, resulting in the loss of 12 gallons of fluid. As we got into the course of the race, Ryan went back out to collect aid stations to bring fluid back to the finish line. When we discharge volunteers, we instruct them to fold the table and leave materials on the side of the road. Unfortunately, Ryan came to an aid station where somebody was finishing loading up all but the table and paper goods and pulling away. In all, we lost 20 gallons of fluid. Despite having more fluid than last year in total even after the amount we lost and having fewer finishers, we simply didn’t have enough to meet all the demand at the finish at the right time. We got all of our fluid back to the finish line and was able to satisfy people’s needs, but it wasn’t as easy as it should have been.

My Poor Brain- Ivy opted out of sleeping a lot in the weeks before the race. This resulted in some spectacular brain farts on my part: for example, forgetting the RRCA medals for the awards ceremony in the garage. The pacer signs were last minute and, although Ryan tried his best, were not as clear as they needed to be. Lastly, our trash dumpster never arrived, and so we had to improvise a solution that did not arrive until two hours after the race ended; this was the straw that broke my tired back. I still need a good night’s sleep and a nap. 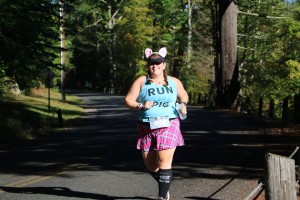 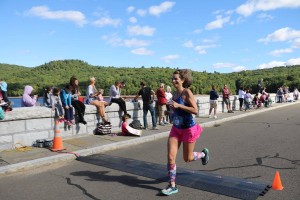 The finish on top of the dam.

Increased Outreach Marketing – One of our changes in 2016 was migrating from Active.com to RunSignUp for our race registration back-end. This move reduces fees paid by runners and helps play a role in our increased donations to Running for Rescues despite having fewer participants this year. That said, Active.com does a fantastic job with marketing your race for you. We didn’t do enough to put the race out there. This is something that Ryan has plenty of experience with given his time in the specialty run industry, and so he will be taking the charge to make sure every runner in Connecticut knows about our race and can register for it.

Videotape the National Anthem When Shira Sings It Again – Can we get an encore performance, please?

Water Bottles at the Finish Line – Every finisher next year will have a bottle of water for themselves. Runners at the finish line don’t look for Gatorade; they want water. We made the mistake of making a six gallon container of Gatorade for the finish that was more than half full at the end of the race. Next year: water bottle for every finisher, which you can then refill at the coolers; this makes sure every runner is guaranteed at least a 16-20 oz (depending on size) bottle of water at the end of the event.

Verification for the Early Start – We are likely going to move to a verification of race times for the early start / confirmation that it is your first half marathon. Unfortunately, too many people simply want to “get out and do the race” and leave at 8:15, run much faster than 2:30, and leave (this year, 8 folks well under 2:20); this results in permitting issues with CTDOT (our permits let us go through certain intersections and be on certain roads at certain times). Additionally, we will likely move the cutoff for switching between starts to September 1st. Once bib numbers have been assigned and sent to the printer, it costs the race $3.50 per transfer from that point forward. This year, that totaled over $150 in money that could have been donated to Running for Rescues. 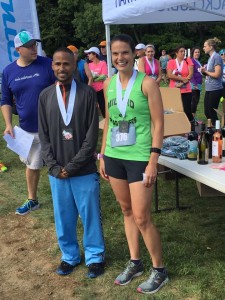