Last week was interesting. I did two swim-bike-run workouts that involved wearing a timing chip on my left ankle. I think most people would consider this to be racing.

First race was the Griskus Sprint Triathlon.  Its one of the oldest races in Connecticut and the course is a bit of a bitch.  Its a .5 mile swim in a very warm lake, a 10.5 mile hilly bike and a 3.1 mile run that’s all downhill for the first half and all up hill for the second half.  The race, which takes place on a Wednesday night, was delayed because of thunderstorms (its been unusually hot and humid in Connecticut this summer and we’ve been getting lots of storms), so we go started at about 6:30 p.m.

While wetsuit were “allowed” on the swim, the water was way above 78 degrees and there was no way I was going to wear one for a short, hot swim (there were no USAT officials and the RD allows everyone to wear wetsuit regardless of the temperature to be beginner “friendly” — honestly I think its unfair, hot water and hot air temperature leads to massive over heating).  The swim was a double line out and back.  There were two heats of swimmers in each wave.  The A heat went out to the left of the buoys, the B heat went out to the right and both heats came back down the middle.  I was in the first wave on the B side.  Swim out was fine, I even impressed myself with my use of backstroke around the turn buoy.  On the way back, several swimmers in waves behind me were swimming to the left of the buoys leading to weaving and a head-on collision.  Not fun.  The swim was not great but it wasn’t horrible.  Worst part of the swim was the run to T1.  There is something not right with the ball of my right foot, not sure if its a neuroma or a deep blister (I have a podiatrist appointment this week, I’m being good and having it checked out) but it is quite painful to run barefoot on a hard surface.

The bike was painful.  The Griskus bike course goes around Lake Quassipaug.  Anyone who is familiar with the Rev 3 Quassy run knows what the Griskus Sprint bike is like.  I am not so great with hills (the weight gain does not help when it comes to hills), especially short steep hills and, yeah, there were a lot of those.  To make matters worse I used my race wheels.  Unfortunately when I didn’t think that the last time I use my race wheels was at Ironman Florida and that I had an 11-23 cassette on the wheels.  Not good.  I really needed my 12-28.  I had way to few gears and my cadence was horribly low on the uphills.  Because I got pissy on the uphills, I coasted, rather than pushed the downhills.  Overall not a good performance.  I totally let my hill unhappiness get to my head.  Its so important to stay focused and positive and I let it all go.  Bad Kel.

The run was miserable.  The run course is essentially 1.5 miles downhill and then 1.5 miles back up. with some rather steep inclines and declines  What I needed to do was to push and just let myself hurt.  What I actually did was decide that I was going for a nice aerobic run on the way back.  i totally let myself get run out of 3rd place in F30-34 (I finished less than a minute behind and was passed on the run).  I have no issues hurting at the end of a 70.3 or 140.6 race.  Throbbing quads and a stiff lower back don’t bother me, but really pushing hard in a 5K or a sprint is tough.  I make up excuses and convince myself that I’ll blow up (I really don’t think its possible for me to blow up in a sprint but I still can convince myself of this while racing).

While I wasn’t particularly happy with my performance at Griskus, it was useful.  I knew what I did wrong and I knew that the next time I had the privilege of racing, I needed to push.

About a month ago I convinced Shaun that it would be fun to go to “Boston” to race for the DAM Sprint Triathlon.  Come Saturday morning, we were up at 3:30 a.m. headed not for Boston but for Amesbury, which lies on the New Hampshire border.  I thought it was a perfectly pleasant drive as I promptly fell asleep in the car, Shaun disagreed.  We got the race early and it had the world’s worst transition area.  Not only were bikes squished super close together but the racks themselves were super close making it impossible to navigate.   I like neat and organized.  This transition area was not neat and organized

The swim was advertised as .5 but post-race the organizers announced that the fire department inadvertently moved a buoy making it .6.  I’ll take the extra .1.  Swim was in calm, somewhat murky Lake Garder.  The only issue with the swim was buoy placement.  There were only three buoys marking the swim and all were within 100 yards of each other at the turn around point.  Coming back to the shore (into the sun) there were no buoys, flags or anything marking the swim out so everyone just sort of aimed for the shore.  I still haven’t totally figured out why my pool swim and my open water swim don’t line up.  People that I drop in the pool (even in the long course pool without the super frequent flip turns) are able to stay with me or beat me in open water.  Not sure what’s going on. I thought this course was flat.  It wasn’t.  Its wasn’t Griskus, but there was a fair bit of climbing including a fairly long clim at mile 11 that I was not expecting.  Overall I rode well.  I pushed the descents and was able to hang with a few very fast FitWerx girls for a while.  A much better bike than on Wednesday.

So the run on Saturday was .3 miles longer than the run on Wednesday and I ran it a minute faster.  This course was almost the opposite of Griskus — steep descent out of T2, 1.5 mile gradual climbed to the turn around, 1.5 mile gradual descent back and steep climb to the finish.   I just pushed and hurt the whole way.  It wasn’t the fastest run I’ve ever done, but it was a significant improvement.  I’ll take it.

Running out of T2 Shaun was screaming at me that I was third in F30-34.  I had a solid run and ended up 2nd of 19.  Pretty good stuff.  Its nice to still be able to place at local races even though my body isn’t where I want it to be right now.  I continue to believe that if I keep working and doing what I’m supposed to do, its all going to come together for me (hopefully by Ironman Florida). 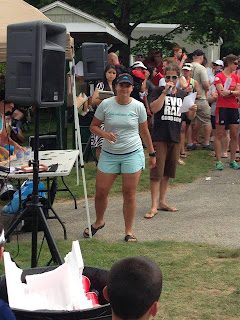