When discussing #50WomentoKona, the most frequent argument I hear about why the current system is fair is that the slot allocation to professional triathletes is proportional. First, lets be clear fairness can be subjective but equality is objective; the current system may be fair in the opinion of some but it is not equal.  With that said, I want to address this argument but a few caveats:

Having said all that, if you still want to argue proportional representation, my question for you is:

Where do you draw the line?

People (both males and females) accept elite cards for all sorts of reasons including racing against the best in the world,  bragging rights, boosting a triathlon-related business or simply being able to race any WTC event other than Kona for a one time flat fee.  There is nothing wrong with this but not all holders of elite cards have aspirations to race in Kona.  In fact, many of the individuals on the KPR list have only raced a single race during the season (20% of the male professional triathletes athletes and 15% of the female professional athletes).   Perhaps these individuals are injured, are short course athletes or just want to try a WTC event as a one – off.

That being said the “long tail” of both male and female triathletes holding elite cards distorts any analysis of proportionality that leverages the entire KPR list.  Below is a graph nicely illustrating the long tail. 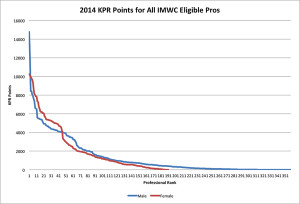 Here’s a table showing the number of male and female triathletes holding elite cards at various numbers of KPR points (note — this information is from the final 2014 KPR data, the last full year available). 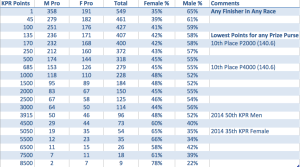 Now the question is — where to draw the line?  Opponents of equality are correct that at 1 KPR point male triathletes holding elite cards represent 65% of the total and females holding elite cards represent 35% of the total.  If we were to draw the line at 135 KPR points, the lowest possible number of KPR points a person can have and still have collected a paycheck from WTC (there’s a $500 payout for 6th place at certain P-500 70.3 events), the ratio is 42% female and 58% male.   At 3915 (the number of KPR Points the 50th place male had in 2014) the numbers shift to 48% female and 52% male.  In fact, as demonstrated by the chart below at 5050 KPR points, women proportionally outnumber men. 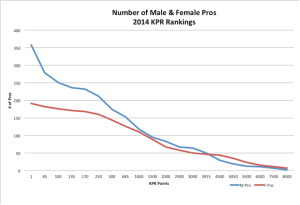 So what does this all mean?  Really, nothing.  While numbers may not lie, the people who select and manipulate them can certainly create varying impressions based on their presentations.  You can find numbers to justify anything.  Proportionality is nothing more than a diversionary tactic being used to retroactively justify a discriminatory policy.  If you believe in equality, you believe in #50WomentoKona.

It is clear to the untrained eye that the two lines have a mirror image at a critical section of the rankings. For the women, there is a steep decline around ranking 42 and the men at about 59 – the lines go nearly vertical.

I believe what the data, what the picture, is telling us is that the ten to fifteen pros, in each gender, who are vying for the last half dozen slots or so are extremely competitive. For women, if you go into the last two weeks “on the bubble” that last race matters. The same thing happens for the men but at a different point in the graph because the parameter is set at 50 not 35.
It is not a surprise that they are both competitive fields for the final slots of a coveted race. What jumped out at me as “evidence” of the depth of field is that the lines are so clearly the same slope and vertical. The drop-off is because – in my theory of the data – the people on the other side of the bubble don’t vie for those final few hundred points. They make rational decisions about travel, wear on their bodies, probability of success etc.

The key, to my mind, is that without understanding statistics anyone can clearly see the feature of the graph that just to the right of the cutoff, there is a marked change in the slope to the extent that it looks like the line goes off a cliff. Why would it be identical for men and women? Because they make the same reasoned, competitive decisions about their place in a deep field. Maybe I’m all wrong about this. I’ve not studied statistics in a long time.

But, the numbers are always more than numbers. They have to tell a story about people who have made decisions based on available information and incentives. The incentives in this story are clear. Get enough points to be ranked above the cutoff. The information is widely available – from magazines and websites, blogs, private analysis, coaches etc. – about who is registered for which start lines, how many points various people have accumulated etc. Critically, they have all sorts of information about how competitive their field is for those final few weeks.

Therefore the conclusion is that the decisions made by women and men must be just about the same given the same clear vertical feature in the chart. I like the article and think that this feature is something you found but didn’t draw out. Keep up the good work.