Last night Americans elected Donald J. Trump as their forty-fifth president.  President-elect Trump defeated Hillary Clinton, a woman with forty years experience including serving as Senator from New York and Secretary of State under President Obama.  Like me, Secretary Clinton is an attorney.  While I took a job in Big Law after graduation from law school, Secretary Clinton took a position at the Children’s Defense League.  Throughout her career Secretary Clinton worked to help women and children, particularly those who were not born into privileged families (remind me that we still need to discuss white privilege).

While Secretary Clinton was not perfect, President-elect Trump scared both your momma and daddy.  President-elect Trump had no public service experience whatsoever and had engaged in questionable business practices during his career including multiple bankruptcies, tax avoidance, civil rights violations and running a fraudulent foundation and “university.”  During the campaign President-elect Trump belittled and disparaged women, disabled people, Hispanics (especially Mexicans), African Americans, Muslims, Gold Star parents, the media, Pope Francis and even his fellow Republicans (while Momma and Daddy do not often agree with Paul Ryan, Jeb Bush and even Ted Cruz, they do respect them as politicians trying to do their best).

What bothered me the most about President-elect Trump were his attitudes towards women.  President-elect Trump judged women based on their sexual attractiveness.  Before you were born Momma was diagnosed with an eating disorder and still has serious issues with body image.  In the months after you were born, Momma struggled horribly with her body and the fact that she found it very difficult to lose pregnancy weight.  To hear a presidential candidate (and now President-elect) critique women for gaining weight and to extoll the value of women based on their (excuse my language) fuckability, not only made me incredibly sad but also caused me to question my own self-worth.  If I couldn’t lose weight and get back my pre-baby body that made me a failure not only in my own eyes but in the eyes of our President-elect.  While my white privilege prevents me from having to worry about being deported, being denied entry into the United States or being racially profiled, I can only image how African American, LGBTQ, Hispanic and Muslim Americans feel this morning.

Despite everything President-elect Trump did and said during the course of the election, the American people chose him to serve as our President (this is a reminder to teach you how the Electoral College works, as Secretary Clinton leads the popular vote).  As Colin McEnroe said “Americans had a ravenous appetite for change and only one food truck pulled into the parking lot.” That food truck happened to be driven by President-elect Trump.  Momma and Daddy first learned the news at about midnight on November 9th.  We were waiting for you to wake up for your midnight snack and compulsively checked and refreshed our phones.  Momma’s first words to Daddy were “I’m scared.”  This morning in the clear light of morning, Momma and Daddy are still scared.  When Momma came downstairs we hugged both you and #OwenOtter hard and cried.

Ivy, Momma and Daddy love you very much.  We’re going to do our best to teach you that you can be anything, even president (I promise you that someday we will break that highest, hardest glass ceiling).  We’re going to teach you (hopefully by example) to be kind to everyone, to listen to those who are different from you and to exhibit both sympathy and empathy towards those who are not as fortunate as you are.  We’re going to show you that differences make us stronger rather than weaker.  We are going to try our best to help you grow into the amazing person we know you can be no matter who the President-elect is or what is going on in the world around you.  Sometimes we are going to fail you, sometimes we are going to frustrate you and sometimes we aren’t going to understand each other.  No matter what, Daddy and I are going to try our hardest to protect you and we promise to love you unconditionally.  Today made Momma and Daddy very sad, but in you (and in all the other little girls and boys) we see the future and for that, even in this dark time, we are hopeful. 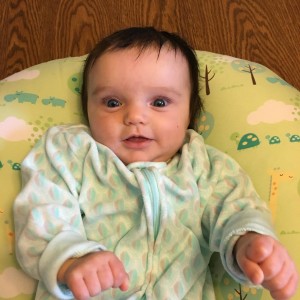