I had so many plans and goals for Ivy’s first year — getting back into shape, losing all the baby weight, running a marathon, qualifying for USAT age group national nationals, racing a half, training for Ironman Florida — and I failed at all of them.  I should be clear, while I’ve dealt with a lot of athletic failures this year as a person and as a family we had tons of successes; Ivy is a happy, healthy almost one year and that counts as success number one.  After deciding earlier this summer that there was no way I was going to be able to properly train for Ironman Florida, I’ve been in a triathlon funk.  Its tough to train just for the sake of training with no goals or races on the horizon.  By mid July I was just running. Ivy and life in general make it hard to find the time and effort to swim or bike.  I had resigned myself to not racing at all this year.  That changed last week.  I had several athletes racing the Cranberry Trifest Olympic and in texting my athletes about the race one of them asked me what my excuse was for not racing.  I went through all of them — I haven’t raced in over two years, I wasn’t trained, I hadn’t been biking or swimming recently, nursing and pumping would be a pain in the ass on race morning, I didn’t want to embarrass myself, my bike needed work, I was more useful cheering and volunteering and on and on.  When I got to the end of the list, he told me, now that you’ve run through your excuses its time to race.  That was the kick in the ass I needed (Thanks, Eric). 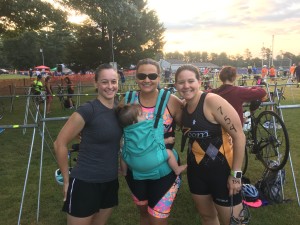 Pre-race with Amy and Jocelyn.

Once I had decided to race, the first thing I did was email Michele Landry at Smashfest Queen (Michele designed the new Sonic Endurance kits and they are amazing).  While I have tri kits that kind of fit, none of them fit well (hooray still nursing boobs and a post c-section joey pouch).  Michele assured me that she could get a kit to me in time to race, so I ordered a RFA tri top and seven inch tri shorts.  The kit arrived Friday afternoon, I was all set on the having something to wear front (as an aside the kit was amazing and warrants a full review).  Next up was making sure my bike actually worked.  I called Shaun and begged him to come over on Saturday to play with my bike, make sure that my wheels matched and that I could actually shift.  The Argon E-118 and HED 3 wheels are way too much fire power for my current fitness level but at least they looked good.  Finally there was the pre-race packing for both me and Ivy.  After sherpaing all day at Placid, Cranberry was going to be easy peasy for Ivy, but I still wanted to make sure Ryan was prepared (unlike Placid where we forgot to pack diapers in her race day bag). 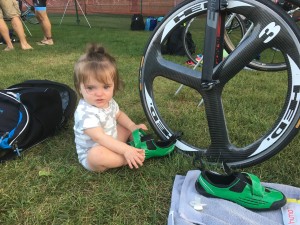 Ivy is the best sherpa around.

Race morning Ryan I were up at 3:30 a.m.  Ryan did all the last minute loading into the car while I nursed Ivy.  We got her safely into the car and back to sleep and we were off by just before 4 a.m.  We made great time and arrived at the race just after 6 a.m.  Ryan put my bike together and carried over all the gear while I took Ivy to registration and body marking.  After meeting back up wit Ryan, Ivy was being fussy so I wore her into transition and she “helped” me set up.  The nice thing about being totally unprepared for a race is that I had zero expectations and zero pre-race angst.  After a few trips to the port-a-potties and lots of time chatting with other athletes, it was time to head to the swim start.

The swim start at Cranberry is a rolling time trial by wave.  I made the mistake of being at the back of line for my wave and having lots of people to swim through.  The pond itself is shallow and the swim course goes around the perimeter of the pond.  Within a few hundred yards from the start several men in the wave in front of me decided to walk.  Because the bottom is really soft, they kicked up a ton of dirt and debris and it was like swimming through mud.  I took a minor detour towards the center of the pond just to avoid the super silty water.  Other than avoiding rouge swimmers from the wave in front of me and trying to stay out of the mud, the swim felt good.  I realize how lucky I am to have a swim background and be able to jump in with little to no training. Finishing up the swim I looked down at my watch and realized the course was SUPER short.  Probably 400-500 yards short.  Even with my detours, my watch only showed 1500 yards of swimming. 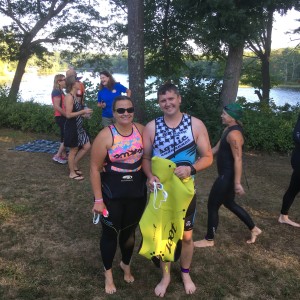 Thanks to Eric, I actually started the race.

The run to T1 involved stone stairs (which I have fallen on in previous years) so I took my time walking up the stairs, found Ryan and Ivy and gave them a hug and then trotted into transition.  I like to keep things simple so all I needed were shoes, a helmet and glasses and I hopped on my bike.  As I started riding out all I could think about was how sore my sit bones were going to be.  I settled into a comfortable pace and let the race pass me.  I know I have no bike legs right now and I tried to pick out a few bikers that I could keep pace with from a distance.  I would guess that over the course of the bike 100+ people passed me and I passed maybe 5 or 6 people.  I got lots of “pretty kit” and “way to goes,” which was nice.  For the most part the bike felt good and I found myself smiling throughout the ride.  While I don’t have fitness, I can still ride smart and make the most of gearing and managing the rolling hills.  The Cranberry course is gorgeous and rewards the rider who is smart and aggressive with the terrain.  When I hit mile 24 I remembered that the bike course is long (I guess that makes up for the short swim) and started cursing the last 2+ miles of biking (which also involved a nasty head wind).  Finally I made the turn into transition and again found Ryan and Ivy waiting for me.

Heading out to the run my lower back was not happy and I realized that I hadn’t exercised continuously for this long in over two years.  The first mile was shuffle.  I figured I’d give it a mile or two of suffering.  Either my legs would come to me or I’d start walking.  Thankfully my legs came to me.  By the second mile I was feeling good.  Slow, but good.  I realized running is a lot easier without a 55 lb stroller.  While a steady stream of athletes passed me on the run, I was able to pass a dozen or so.  At mile 4 or so Jocelyn passed me (so excited she had an awesome run) and by mile 5 I realized that I would be able to be my run time goal of 1:15.  As I turned into the park to finish I again spotted Ryan and Ivy.  I confirmed with Ryan that I could take Ivy across the finish line with me as she jumped into my arms.  Ivy and I strolled the last 50 yards together and I threw her into the air as we crossed the line.

I wasn’t fast.  The race wasn’t pretty.  I am, however, glad I started and finished.  In the wake of my post-race euphoria and optimism I keep thinking maybe this is the spark I needed to get started again. 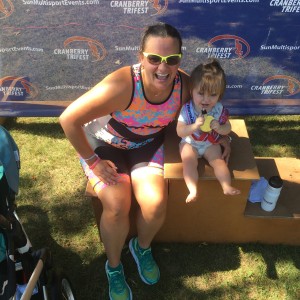 Post-race with the SQUISH! 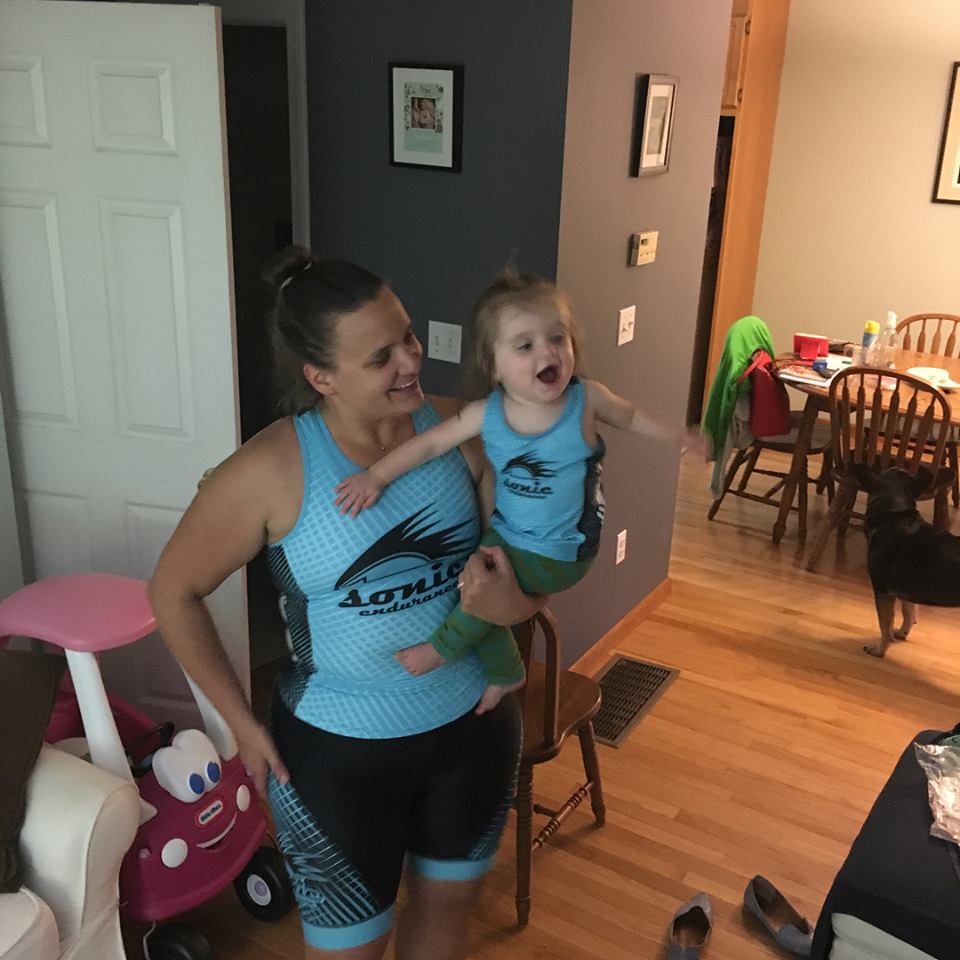 Its only October, but I feel that I can say with definiteness that 2017 sucked. Alright, maybe that statement is a tad over dramatic.  In all seriousness, there were lots of good things about 2017 Read more…