brobird noun: a male runner who wears Oiselle apparel: I saw a lot of brobirds at my last marathon.

Oiselle has been making running apparel for women since 2007, when Sally Bergesen took her years of branding and marketing experience and applied it to her dream of better fitting, better styled running apparel.

I started selling Oiselle in the fall of 2010 at Maine Running Company, with staples like the Lesley Knicker and the excellent line-up of tees. It was easy to tell that there was a hit on our hands: the fit across the sizing spectrum accommodated far more women than the traditional, say, Nike Tempo short. We expanded our selection that spring to include the Distance and Roga shorts, along with some of the Flyte tops and never looked back.

When I took the Run Manager position with Rev3 Multisport, we decided that we would treat run like, well, a run store would. So it was no surprise that I immediately went into booking plenty of Oiselle items to expand upon our “traditional” multisport shop brands like Pearl Izumi or 2XU. We could see the growth the brand was going to have in 2014 and beyond. We sold Oiselle gear at Rev3 events all through 2014.

Throughout this momentum, an emerging trend came up: there were a fair number of guys running in Oiselle apparel. They self-appointed themselves as “brobirds,” playing off of Oiselle’s translation from French (bird). Some even officially joined Oiselle’s Volee team (now since merged with the Flock). The typical outfit consisted of a men’s top and a pair of Distance shorts.

Now, if you’re familiar with me at all, you know that I have little to no shame. See below: 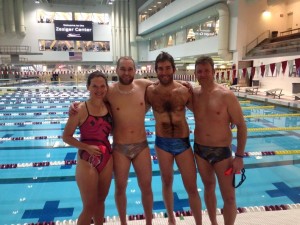 I also like to be comfortable when I run; I’m going to be out there for a while, and I don’t want to make the experience any more difficult than the workout I have to complete that day. To be honest, it is a pain in the ass to find the features that I like in a pair of men’s shorts. I like my running shorts short. I like pockets to be able to carry nutrition if needed, or an ID and some cash if I know I’ll be grabbing a beer before I’m done with the day. And I need the leg opening to be wide enough to accomodate my quads without having a leg split that would flap open and reveal the lining beneath. If you’ve ever shopped for running shorts in a store, you know exactly what I’m talking about: the liner hanging out lower than the material of the short itself. No thanks!

Combining my lack of shame and difficulty procuring a good pair of men’s shorts, Kelly recommended that I try on some Distance shorts for a run. Normally, I’m in-between a small and a medium in most men’s shorts. I wore a 10 in the Distance short, which is a touch loose in the waistband but winds up being more than fine after tying them.

Putting them on, you’ll note that, well, there really isn’t much all that different between a “men’s” and a “women’s” short. There’s a liner, and a waistband, and the outer shell. The cut of them is different, for sure, but if you were expecting something to be radically different, it isn’t here. Other Oiselle shorts, like the Roga, feature a much wider waistband, similar to yoga pants.

The leg opening is plenty wide for my cycling legs, and still has a good “flow” to them where the material isn’t baggy, but it’s loose enough to not really notice them while running. Which, if you think about it, is really the whole point: you don’t want to have to think about what pair of shoes, or sunglasses or shorts you have on. You just want to run.

There are two pockets on the Distance short: one on the side, and one on the back waistband. The side pocket effectively fits my iPhone with a Lifeproof case on it, giving plenty of room for when I decide to carry some Clif Shot Bloks or larger gel flasks. The rear pocket is perfect for some cash and an ID, or a couple of additional gels for those really long runs.

On the run itself, the shorts are about as perfect as you can ask for. They don’t cling. They don’t fight you. They simply let you run without getting chafed, marked, rubbed the wrong way, or annoyed to hell with the way the shorts ride. I’ve done speedwork, I’ve done long runs and I’ve done survival slogs in these shorts; all were fantastic in the Distance short. To the point where I now own a few pairs of my own.

In summary, then: if you’re a guy looking for an excellent pair of short inseam running shorts, put your reservations aside about shopping “women’s” shorts, and throw a pair of Distance shorts on. 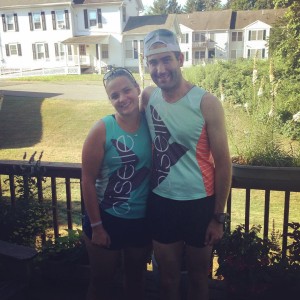 Kelly wearing Lori shorts, me in the Distance short.

Love this! So much applause.

Thanks for the kind words! I have to say, the outfit of the Oiselle singlet plus Distance shorts was absolutely perfect for 100 on 100 (see the next post on the blog).