The initial impact seems innocuous enough. Just another bump. Nothing you haven’t done a hundred times before. You’ll shake it off.

Then the fog starts to set in. It comes in fast, like a gale off the water, to envelope the entire harbor that is your thought process. Everything gets harder. You can feel the thought process trying to happen. You have to hear the words that you want to come out of your mouth before you can say them. Your vision becomes blurry, distorted. There’s a reason why they refer to this as punch-drunk. Ten tequila shots just hit your bloodstream without the joy of imbibing them or the celebratory lime afterwards. Walking is more than just a chore. Trying to figure out which direction is vertical is near impossible.

This is what your “average” Grade 2 concussion feels like 10 seconds after impact. The actual headache won’t set in for another 15 minutes or so. The light sensitivity will start to replace some of the blurred vision, but not all of it. You’re still trying to scramble to figure out which way is upright. Normally, this wouldn’t be a problem, but the world’s starting to spin a little bit because of the combination of light sensitivity and blurred vision.

Before the hit to the head at the Quassy open water swim.

Let’s throw one more variable into the mix: you’re in the middle of a lake. This is the situation I found myself in a few weeks back, during the course of an open-water swim race at the Quassy Sailing Center. I took the combination of a swift kick to the jaw and an elbow to the top of the head and have found myself back on the post-concussion syndrome struggle bus.

This is my fifth documented concussion. My first one was in the fifth grade: I fell backwards from about seven feet off of an open area on the playground onto the woodchips below. I had luckily managed to get my feet under me, but smacked the back of my head on the ground afterwards. My second one came playing pick-up football in high school; the third from pick-up football in college (you’d think I’d have learned better).

The fourth one came during the course of my bike crash in 2014. All of the other ones were relatively minor. This one was anything but. The first sign of a Grade 3 concussion is being knocked unconscious. We know that I was out for at least 30 seconds in full – the guys who stabilized my spine when they found me in the road were about a quarter-mile behind me when I crashed. The next sign – I couldn’t lift my head for the life of me without debilitating nausea or a migraine.

Following my first (and to date, only) trip in the ambulance, the first concern was orthopedic and pain management. Obviously, the torodol and other drugs helped in that regard. The emergency room folks weren’t all that concerned with neurological function – I could speak, I knew people in the room, and I knew where I was supposed to be. That was the extent of my neuro work-up. That being said, the hospital also only found one of the three fractures in my spine and discharged me without stabilizing me…so I don’t exactly consider the care I received immediately after my crash as “stellar.”

I was out of work for a while post-accident. Between the spine brace I was in, and the inability to look at a screen for so long, I couldn’t work as a digital marketer. I spent a lot of time trying to do puzzles, although that was difficult in its own right. I was trapped, unable to exercise my mind or body without debilitating pain. Depression and anxiety set in pretty quickly. So did usage of my painkillers – I couldn’t go four hours without them. Weaning off of them was an exercise in willpower – I had pretty clearly become addicted to them. I luckily was able to break off them.

I returned to work in September. For those who aren’t well learned in the digital marketing space, the job involves a whole lot of Excel – from reports to keyword and copy review, you’re using Excel frequently across multiple monitors. The Google native platforms also are cell-divided, as is Facebook’s Ads Manager/Power Editor. To put it mildly, you rely on concentration and focus heavily to stay within the cells. These are things that have traditionally been strengths of mine. Instead, it was exhausting and infuriating. I also had to rely more on pen-paper to-do lists in order to be able make sure everything got done.

Through the course of rehabilitation for my back, we did some post-concussion syndrome related rehabilitation protocol. However, we never really addressed any of the cognitive aspects of it – instead, we primarily focused on motion and getting me back into exercise. To their credit, it’s why I was able to race at all in 2015. But certain symptoms still lingered – word recall was a bit of a chore, and short-term memory remained a loop. And to say it was exacerbated when Owen died qualifies as “Understatement of the Year.”

Fast-forward to just after Lake Placid, and the fatigue also set off a series of associated memory symptoms. It was clear something needed to change. In late August there happened to be a 5K XC race near our house. I, naturally, blew up. Gaylord Hospital’s physical therapy unit was on site, and I was happy to get some ART treatment post-race. The conversation with the head of the unit went something like this:

“So, this all locked up in a 5K? You must have had some underlying issues in your back.”
“Yeah, three years ago I broke my back cycling – thoracic spine anterior body.”
“Whoa, OK, that explains it. So, how’s your head?”
*silence*
“Yeah, we know. We see it all the time. We can help.”

I was starting to explore the rehab process with Gaylord when I got concussion #5. A couple of referrals later and I was suddenly in the Center for Concussion Care’s arms. After a two hour long meeting with the head of the program, we had a rehabilitation protocol in place to start addressing all of the associated issues in place – from the cognitive function issues (speech/memory), vestibular therapy (addressing underlying vertigo/balance issues), and the physical (lack of thoracic spine mobility resulting in shoulder/neck/running injuries).

It’s good to finally have a plan in place, and to finally feel like there’s some progress. I can feel flashes of when memory is sticking more frequently than it has over the past couple of years, and I can also feel when speech pattern is starting to move in a different direction. Slowly but surely it is progressing – and for that, I am truly grateful. 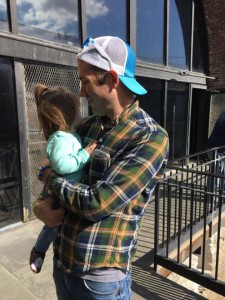 This is a pretty good reason to get my concussion related issues under control.