After a quick ride and run on Saturday, Shaun and I headed up to Boston for the QT2 holiday party and the Somerville Jingle Bell 5K. Before hitting the QT2 party, we stopped at Fast Splits and picked up my father’s Christmas present — a new bike and spent some quality time with Alex and Eric at Stephis on Tremont.  There’s this drink called the Turtle, hot chocolate and caramel vodka, so fantastic. 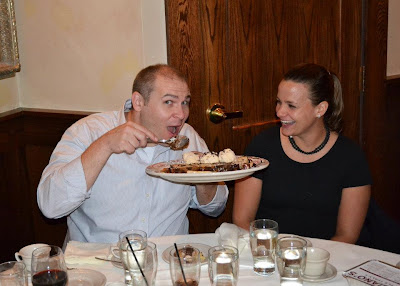 After a change of clothes, we headed to Maggianos for the QT2 party. I made the poor decision to wear a dress and heals when it was 20 degrees out.  The outfit was cute, but I froze on the way over and way back to the hotel.  The party itself was really nice.  There were about 80 of us there and it was really good to see everyone (especially Miss Mary Eggers who was in rare form all night). 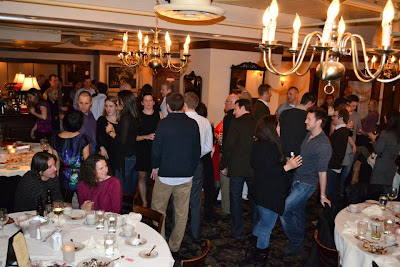 We actually shut Maggianos down and had to take the party to a bar across the street (who says that QT2ers are straight laced and up tight?). While the party continued on long into the night, a little after mid night Shaun and I headed home — it was way past my bedtime.  After getting slightly lost in the freezing cold Boston night, Shaun figured out how to get us back to the hotel. 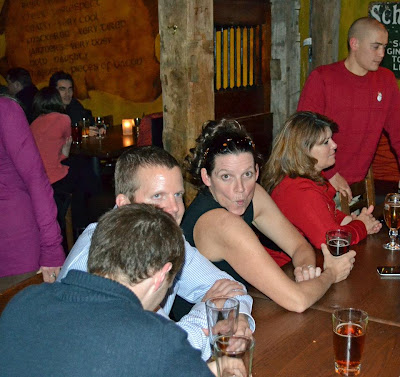 After about 5 hours of sleep on Saturday night, we were up (fairly) early and headed for Somerville. While it was a beautiful, sunny day the temperature was about 15 degrees and there was a steady wind blowing. While this is not super cold for December in Massachusetts, its been unseasonably warm lately so the weather felt colder than it actually was.  Heading to the race I wore tights, fleece pants, a long sleeve shirt, a pull over, hooded sweat shirt, gloves and hat.  I was still cold and I had no desire to take off any of the layers. 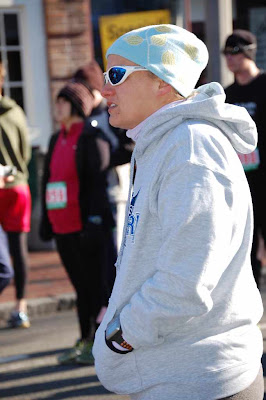 I did an easy two mile warm up and then bounced around the finish line waiting for the race to start. Finally, five minutes before the race began I stripped off the fleece pants and sweat shirt and handed them to Shaun. I took two extra puffs on the inhaler and tried to start close to the front but not too close (I wanted to be behind the really fast runners but in front of the inflatable reindeer). 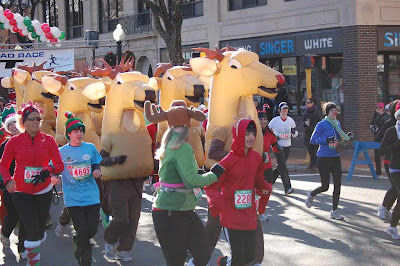 I ended up running a 23:26, which was a PR of about a minute. Miles were 7:09, 7:26, 7:35 and :48. The entire race was up or down. No huge hills but nothing flat. The wind and the cold pretty much ripped my lungs apart and while I was tired at the finish line, I wasn’t completely spent. For some reason its really hard for me to go all out for 3.1 miles. I can go hard (er than usual) but I can’t leave it all out there. 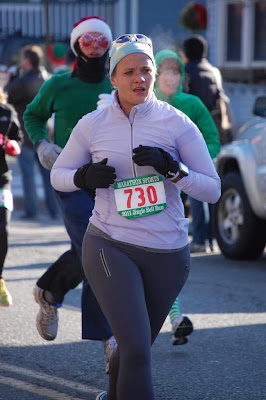 Post-race I was absolutely freezing. I stripped off the wet clothes, threw on my fleece pants and sweatshirt and ran back to the car. No time for fried cupcakes but we did run into the Eggers clan at a MassPike rest stop on the way home (which is almost as good as a fried cupcake). 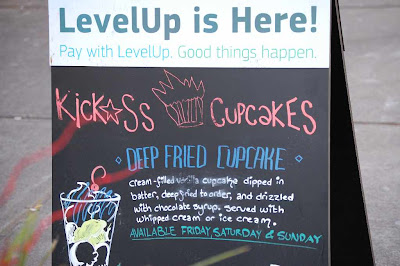