This was my first time running the Boston Marathon and I have to admit that it was an amazing experience.  I qualified for Boston in May of 2011 at the Orange County Marathon in Southern California.  Boston was unlike any other marathon I have experienced. 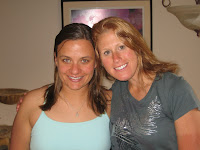 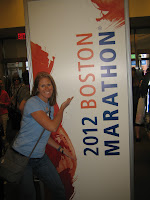 I live in Cincinnati, Ohio and was very fortunate that two of my good triathlete friends (Kelly & Shaun) live in Hartford, CT.  I had a fantastic few days spending time with them.  Kelly was able to get me a seat on the Hartford Track Club Boston Bus and Shaun was the “bus mom” for the day. 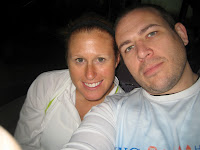 It was an early start to the day for race with a late start (10:00AM).  Shaun and I were on the Boston bus from Hartford, CT before 6:00AM.  The bus was a great way to travel to the race.  The traffic, parking, and people were crazy.  The bus took us to the drop off area where the races hung out, hydrated, and used the port-a-potties (there were lots of these).
The race start is split into 3 waves.  The first wave started at 10:00AM.  I was in the second wave which started at 10:20.  About 40 minutes before my start time, I walked to the starting area.  I was concerned that this would be full of confusion due to the number of participants, but I was pleasantly surprised with the organization.  There was a huge area of port-a-potties and more tables with water and Gatorade.  There were signs, announcements, and volunteers telling participants exactly where to go. 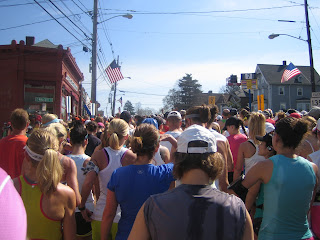 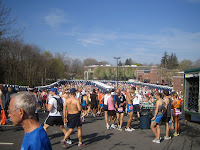 The weather was sunny and HOT.  I believe the high temperature reached 86 degrees.  I know this weather was very upsetting to many participants that intended to “race” the marathon.
I was actually happy with the hot weather.  This was my last long training run before I start to taper for Ironman Texas (May 19th).  The projected temperature for the Texas Ironman race is high 80’s to 90 degrees.  I had no plans to “race” Boston.  I was here for the experience. 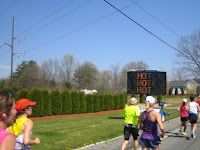 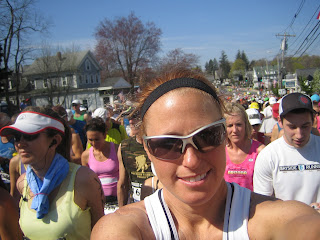 The first few miles were somewhat flat and downhill.  It was so warm that we were sweating before the race started.  There is very little shade on the course.  The crowds line the streets from the start to the finish of the race.  Talk about feeling like a rockstar!  I expected the crowd of participants to thin out after the first few miles.  It did become less congested and more elbow room was available, but there was always a pack of runners.  I never had a time where there was lots of open space around me.  I was impressed that the mile markers were permanently marked on the pavement.
I stated the race a bit too fast for a training run.  I was feeling good and became caught up in the energy around me.  I realized I was going too fast at the half marathon mark, so I then slowed my pace (and took more pictures).  This was my first time in the city of Boston and I enjoyed seeing the sights.  I also enjoyed talking with other runners and learning their stories about their journey to Boston. 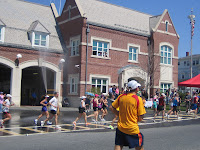 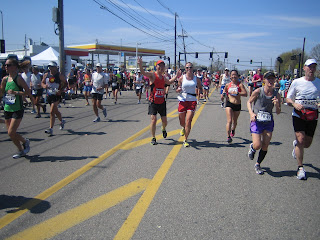 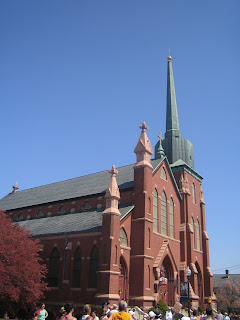 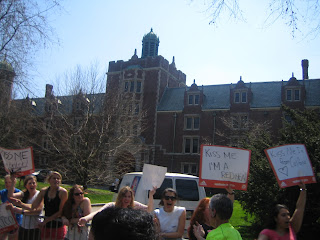 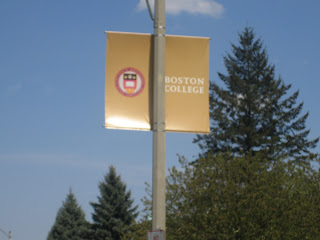 The streets were lined with spectators.  Going by Wellesley College was quite the experience.  The screaming was so loud, it hurt my ears!  The signs were all “kiss me” signs.

Running by Boston College was one highlight for me.  The cheering and noise were also very impressive here.
Many people have heard of Team Hoyte.  This is a father/son team that participates in marathons and triathlons.  Dick (father) pushes is disabled son (Rick) in a special wheelchair.  Such an inspiration!  I had a chill go through my body when running by them on the course.  Knowing their story and seeing them in person made me feel so grateful.  Despite your speed (or lack of) be grateful for having the ability to do what you do. 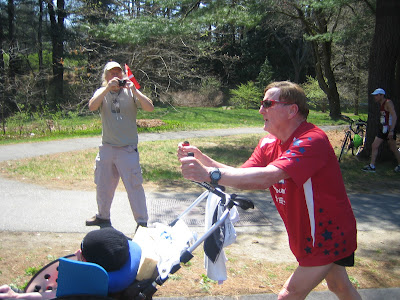 Boston is a challenging course.  Everyone knows about heartbreak hill, but there are many other hills that are not as long, but still very challenging.  If you plan to race this course – do your hill training.  The aid stations were stocked with plenty of fluids, but sometimes the volunteers had a tough time keeping the cups full due to the demand.  So many paper cups!  Due to the heat, this marathon reminded me of an ironman marathon where many participants run/shuffle from aid station to aid station, but walk at each aid station.  There was lots of shuffling, which I am sure is not the norm for Boston. 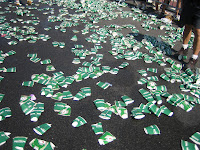 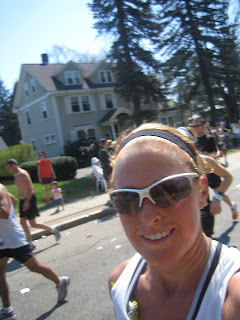 The last few miles of the course were WILD! I remember talking to myself saying, “Engel – You are about to finish running the Boston Marathon!”  I was so excited and was running from side to side clapping the spectators’ hands and yelling. 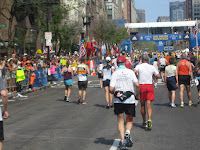 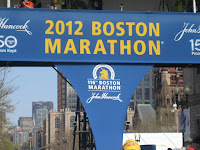 The finisher area was nice with lots of cold fluids and snacks.  I was so excited to have the finisher medal placed around my neck!  I collected my goodies and then went to the hotel to meet up with Shaun and the other runners from the Hartford Track Club. 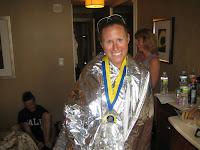 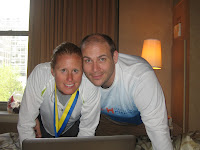 Overall, I was pleased with my race performance (4:10:50).  I had a fantastic time and still had energy at the end.  Boston is not an easy course to run in perfect weather conditions, so the hot temperature this year made for an extra challenging race.
Special thanks to Kelly and Shaun for a great weekend!!