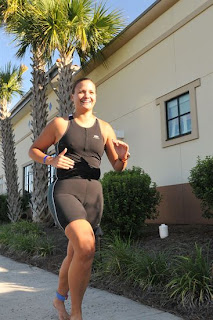 As well as FIRMman went, HalfMax totally fizzled. Restrospectively doing a race 6 days after getting married was not the best idea. The week in Las Vegas and then the hurried trip to Myrtle Beach, South Carolina left me pretty spent and the Vegas desert air aggravated my asthma to no end. To make things worse, 10 minutes before the start of the race, race management announced that they were cancelling the swim due to high e coli levels in the water. They made no mention to this issue at the pre-race meeting, so I was not too happy with the announcement.

The race was re-configured as a bike-run with a TT start from the swim exit (thus the race consisted of T1-Bike-T2-Run). I went off at the very end (there were only about 10 people behind me), which was a poor tactical decision. By the time I started, 90 minutes after the first starter, many individuals had already completed the first loop of the bike course. Once on the course I was greeted by a nasty head wind followed by a sweet tail. The wind picked up as the day went on making the head wind difficult to deal with and causing my front HED 3 to wobble on the turns. I made it back to T2 in about 2:55, not bad, but not great either. Once there I got into a scuffle with a sprint distance racer who had no idea that other racers were around. Once out on the run my left achilles started throbbing. By mile 4 my pace dropped from 8:30 min/mile to 10:00 min / mile and I knew that at that pace there was no way I would secure a spot on the worlds team. At the halfway point, I called it a day and went to find Shaun.

All-in-all I wasn’t too happy with myself or the race, but the only thing I can do is start preparing for 2011.