In a recent Facebook exchange the following comments were made:

What ever happened to every winner of an ironman can race Kona, why doesn’t that happen anymore. Angela Duncan, Dede Griesbauer, etc.. they should all have an automatic slot into the world championships don’t you think?

I thought winners were allowed a spot.

Over the last few years, the system that professional triathletes use to qualify for Kona has become increasingly complicated (the full qualification standards for Kona, including a dozen different definitions of various terms, can be found here.)  Part 1 of this blog post will lay out the qualification system.  In Part 2 I’ll lay out some examples of how Pros were able to and others failed to qualify for Kona. 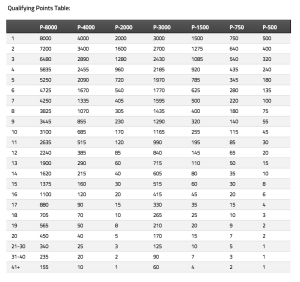 Practically, What Does This Mean?

Based on these numbers let’s take two hypothetical pros, one male and one female.  If both race and win Ironman Arizona and Ironman Coeur D’Alene (and no other races), the male pro will have accumulated enough points to qualify for Kona and the female pro will be sitting on the couch at home on October 10, 2015.

Ew, “racing competitively.” I didn’t know they changed that. That is all kinds of problematic.

Yeah. And its totally in Andrew Messick’s discretion. So apparently Rinny’s walk at IMFL would be ok but Pete Jacobs walk at IM Switzerland would not be acceptable.

You are correct. I’ll make the change. Thanks for letting me know.