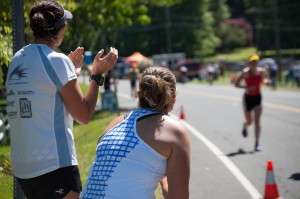 This is my right shoulder.  During the last week of April is began to ache.  I figure I was just tired.  My whole body is generally sore so I didn’t pay too much attention to a new ache in my shoulder.  When swimming the ache began to turn into pain, especially during the recovery phase of the freestyle stroke and during backstroke.  I called for an appointment with my orthopedic surgeon but between my travel and work schedule and their busy appointment book they weren’t able to get me in until June 3, 2014.  In the meantime I went to see my GP who thought it was a trapezius strain due to inflammation in my upper back.  She prescribed PT.  I dutiful went to PT and the PT thought that in addition to the trapezius strain, I also might have a torn labrum.  Unfortunately the PT exercises just made my shoulder feel worse.  I finally had my orthopedic appointment yesterday.  Xrays revealed degenerative arthritis in my shoulder.  In addition to the arthritis I have a non-traumatic separated shoulder (although to me my shoulder looks very much attached in the picture above) and hyper mobility syndrome (which I already knew as all of my joints are hyper flexible and are constantly popping in and out).  All of this is likely related to hereditary issues (my cousin in her 40s has had a double hip replacement).  I am going for an arthrogram (a MRI with dye injected into the joint) to determine the extent of the damage to the shoulder joint.  The doctor seemed to think that surgery would be necessary to repair the joint and told me not to do anything that caused pain.

On a personal note the news was completely devastating.  I got into my car and sobbed the entire way home.  Its really difficult to accept something like this and be to forced to deal with the fact that there’s not a lot I can do about it.  While I’ve doing a bit better on the sobbing front today its been replaced with general grumpiness related both to the diagnosis and the pretty constant pain.  In between the sobbing and the pity party I also could not stop thinking about was Challenge Atlantic City.  Not only do I really want to participate in the first Challenge Family race in North America, I was also selected to wear the number 179 in honor of Jon Blais and the Blazeman Foundation.  This is a HUGE honor.  I’ve made the decision to do Challenge AC as an individual.  I know my swim time will be slow (but I also know that I can swim one armed freestyle in under the cut off time) and then do my best to have a fantastic bike and run.  It won’t be a PR race but there are things more important that PRs and honoring Jon’s memory and helping spread the word about ALS is one of them.

Kelly! I’m so sad to read this. Good luck at Challenge Atlantic City. I will send healing thoughts your way.

Oh my goodness Kelly! Stay strong! I hope you heal up fast!

Sorry to hear you’re in pain, Kelly! Hope you get some relief soon.

Oh no Kelly! I’m so sorry to hear this. Best of luck with the arthrogram and sending speedy healing vibes your way.

What a devastating result. It’s good to know that it is fixable though, and I’ll be cheering you on at Challenge Atlantic City. So glad you’ll still be out there!

I’m not comparing my shoulder with yours, but I had mild right shoulder pain for 20 years. I think I screwed it up throwing a ball wrong. Then it just hurt. Reaching back to slip my arm into the sleeve of a sport coat really hurt. Saw PT’s who told me about problems with my shoulder, tight joint, impingement, limited range of motion, chronic inflammation. That kind of stuff. I did some PT and that didn’t really help. I got a wireless mouse and that helped a little – stopped holding my right shoulder so far forward on my desk all day. Eventually for different reason went to see an A.R.T. specialist. He worked my shoulder for 10 – 20 minutes. And fixed it. The pain completely went away for weeks, if not months, but when it came back it was milder. He worked on it again and it was good through a summer of training and IM Mont Tremblant. Felt super minor teensy pain over the winter. Started to ache and I felt numbness for the 1st time about 3 weeks ago. Went back for another treatment and – feels like new again. I think there is a chance A.R.T. could make you feel better, even if it didn’t fix the problem.

Kelly, you don’t know me, I live in Tulsa. I stumbled across your blog will looking for information on Ragnar racing. From the brief bit I read, it seems to me that you’re doing everything right to be fit and healthy and you’re not getting the results you expected. I think the person who commented on an earlier blog of yours about food sensitivities might be on the right path for you. I’m not a doctor, or even a nutritionist, but I spent a long time looking into natural ways to be healthy, control my weight and feel better. I did a couple things, first of all I went to a natural/homeopathic doctor and was tested for food sensitivities. Second, I did a six week detox diet with that doctor, and then started eating following the Eat Right 4 Your Type blood type diet plan. The short version of the premise behind the blood type diet plan is that, eating the wrong foods for your blood type causes your body to respond with inflammation, and inflammation is at the root of a lot of health issues. Just a thought, you might want to check into it, I know it has helped me, but that doesn’t mean it’s for everyone. Good luck.

I’m so sorry to hear about your shoulder. I can’t imagine the devastation you must be feeling, but can only relate to my personal frustrations and sob-fests with injury. I hope you heal soon with as little down time as possible.