Late on Saturday afternoon (just after Bahrain 70.3 ended and just before Ironman Western Australia began) Barry Siff, President of USA Triathlon tweeted “Very disappointing to see only 7 pro women at #IM703Bahrain and just 5 at #IMWA – definitely not helping the @50WomentoKona cause.” 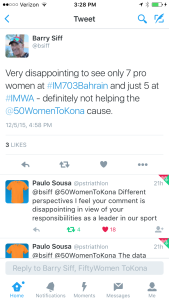 Setting aside why there were so few women at these races — location, time of year, points available, prize purses, travel expenses, lack of appearance fees and the fact that its the off-season for most athletes in the western hemisphere — my question to Mr. Siff is: “Is this statement really what USA Triathlon is about?”  Put simply, USA Triathlon’s mission statement “is to grow and inspire the triathlon community.”  USA Triathlon’s vision statement for 2012-2016 is “to provide the resources required for all in the triathlon community to reach their full potential.”  At its core USA Triathlon’s goal is to break down barriers for all athletes.

Funny thing is, generally speaking, USA Triathlon walks the walk.  USA Triathlon poured tons of resources into its 2016 development program for both men and women.  Barbara Lindquist cannot get enough credit for the excellent work she has done with the Collegiate Recruitment Program.  Because of her leadership and USA Triathlon’s support, the United States has three possible medal contenders for the women’s race in Rio (Gwen Jorgensen, Sara True and Katie Zaferes) and several other women in the top 20 internationally.  Just look at the Collegiate Recruitment Program “Wall of Fame” (Collegiate recruits placing Top 3 in a Continental Cup, Top 8 in a World Cup or Top 20 in a World Triathlon Series):

The results speak for themselves.  The program is the perfect excellent example of what happens when you provide equally opportunity and resources to women in the sport of triathlon.

Yet despite this success, rather than dig deeper to discovery WHY there are fewer female professional triathletes participating in Ironman Western Australia and Bahrain 70.3, Mr. Siff tweets a glib remark about it “definitely not helping the @50WomentoKona cause.”  This remark appears counterintuitive to everything USA Triathlon is supposed to represent and contrary to both USA Triathlon and Mr. Siff’s past statements and actions.  USA Triathlon is not a for-profit corporation, its a non-profit governing body with a mission statement directing it to grow and inspire the entire sport.  Perhaps the next time Mr. Siff takes to social media he can explore the root causes and how USA Triathlon can use its resources to promote, rather than denigrate, professional female triathletes.