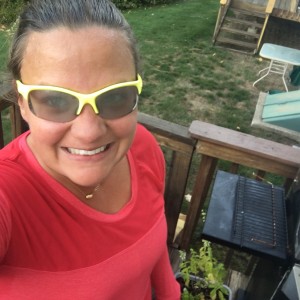 Post 1.8 mile run. Despite the baggage, happy to be running.

This week marks my “official” return to training and eventually racing.  The plan this week (its exciting to have a plan loaded into Training Peaks) is to do about three total hours of swimming, biking and running coupled with lots of core work.  As awesome as it would be to trust myself to write and modify my own training plan, I’m not that stupid.  Just like in the world of lawyering, “he who represents himself has a fool for a client,” in the triathlon world “he who coaches himself has a fool for an athlete.”  While I “should” know what my training is going to look like at any given time, I am horrible at making subjective decisions about myself and encouraging myself to do things I may not want to do in order to improve.   Plus I need objective feedback.  I can’t do that for myself.  So I’m working with Maria Simone at No Limits Endurance Coaching.  I appreciate that I’m a pain in the ass and am thankful to Maria for working with me. 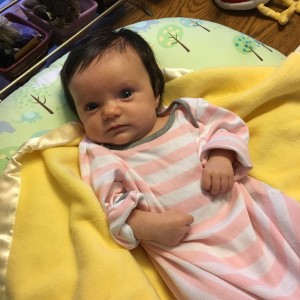 Logistics are a bit more complicated with a tiny one.

Getting back to training the biggest hurdle isn’t physical (but, yes, there are physical challenges), its actually mental.  When I first started training and racing it felt like every training session and every race held a new accomplishment.  I kept getting faster and I had no idea of my capabilities.  Now I can’t help but playing the comparison game.  Doing my first official training run (4 minutes running : 1 minute walking for 1.8 miles) I worked hard to maintain a high 10 / low 11 pace for the run portion.  As excited as I was to simply be running, I could not help but compare this run to previous runs where faster paces came much, much, much easier.  I know I am my hardest critic and I know just how easy it is to judge myself.  In the coming weeks and months the struggle the struggle will be learning to appreciate the moment for what it is. 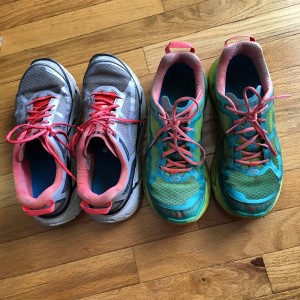 In addition to learning how to train in the moment, I’m learning to deal with some new physical and logistical issues.  Prior to my pregnancy I fell into the barely a B-cup category (despite my wide hips and very ample rear end).  Sports bras were never an issue because I really had no boobs.  That’s changed. I’m now a very full C / small D cup depending on the day and the last time Ivy nursed; sports bras have taken on a whole new importance.  Many of my pre-pregnancy sports bras simply don’t fit.  I’ve been turning to the Gifted Verra Bra and the Hi Low Bra and have gained a new appreciation for the removable cups, which now remain in the bra rather than being trashed.  Any suggestions for comfortable, compressive sports bras would be greatly appreciated. 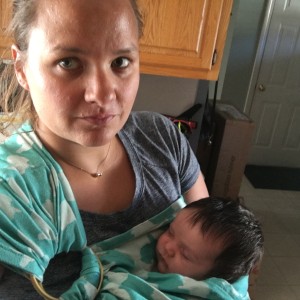 Some days she just wants to be held.

Not only am I exploring a new frontier of running clothing, I’m also adjusting to a whole new way of managing my schedule.  I’m really lucky that I have 15 weeks of maternity leave so I have the flexibility to train without worrying about work, but I’m rapidly learning that I’m no longer in charge — the tiny otter dictates all scheduling decisions.

Normally Ivy sleeps from 9 p.m. to 1 or 2 a.m., eats, and then goes back to sleep until about 5 a.m.  My first day back to training she decided she didn’t want to go back to sleep at 2 a.m. and instead wanted to be cuddled throughout the wee hours of the morning.   By the time I got out to run at 6:30 a.m. (I was waiting for the sun to come up) I had been up for over four hours, had way too many cups of coffee and was generally exhausted.  As much as I love neat schedules, I’m learning (and Ryan is learning) to better roll with the punches.  Here’s hoping all three of us remain flexible and that week one of official training is a success. 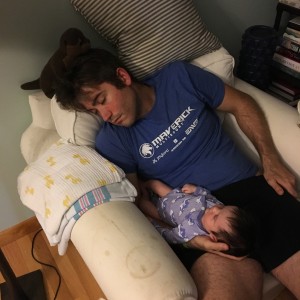 Ryan and Ivy (and Owen Otter); tiny babies are exhausting. 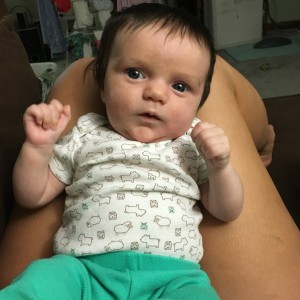 Moving Comfort is your BFF for bras. Get thee to the running store for sizing & fitting.