Since I’ve started in running and triathlon, I’ve alternated good years and bad years. Odd years are good ones; even ones are less so, all the way down to terrible.

Breaking that down further:

Given this pattern of alternating excellent performances with either injury or down years, it was bound to be that 2016 was going to be an off-year. I started that by doing pretty much nothing for the first four months after Owen passed away. I raced now and then, but I really didn’t feel motivated to train. I wanted nothing to do with sports or training. It just wasn’t in me. 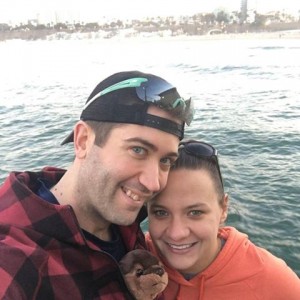 Us in California in January, just after we found out about Ivy.

Right around the time that I started to turn the corner mentally on getting back into the swing of things, we found out that Ivy would be introducing herself to the world in August. Kelly had a brutal first trimester; she vomited nearly every morning. Our schedule was something along the lines of: wake up, eat breakfast, lie back down because Kelly was so nauseous, shower and leave for work. Considering how she felt, I didn’t feel right leaving to go to the pool or out to run.

As we headed into May and June, I finally decided that it was time to start gluing the pieces together for a year; I wanted to be able to give the best support to Maverick Multisport that I could through racing. Given that, I started interviewing different coaches; I don’t trust myself to be the best judgment of preparation and work, and I find that working with a coach provides influence and inferences that can then be applied to athletes that I coach. After much deliberation, I decided to work with Liz Waterstraat and Multisport Mastery to begin the process of building me back up.

Naturally, though, the body had other plans. Almost immediately, my back seized back up. This was likely due to losing a bunch of core strength during my time off. I saw Physical Therapy and Sports Medicine Centers, who diagnosed a partial herniation of L4-L5. In the course of a couple of weeks, we were able to get it to calm down, do some chiropractic realignment work reinforced with ART and physical therapy work, and get myself moving again.

I made my season debut late, racing a sprint and Olympic distance tri in August. My big success for the year came with the Quassapaug Open Water Swim Festival shortly after Ivy was born: I raced in all three races, wrapping the day up with a total of five miles of swimming. I won the wetsuit category for the combined and the individual 3-mile and 1.5-mile races. Hooray! I did not suck entirely! 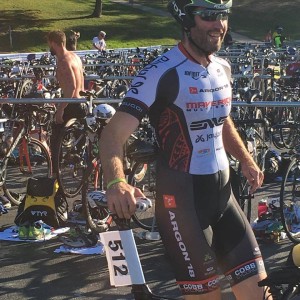 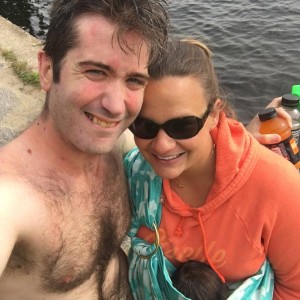 Fast forward to the end of September, and I’m finally starting to get into a rhythm with training. I trained first thing in the morning, then went to work; Kelly got stuff in during the day while I was at work or when I got home. I was getting ready to run the half-marathon at the CHaD Hero festival (a fundraiser for the Children’s Hospital at Dartmouth). Came home from work one day, and took Ivy to start playing with her, and she sticks her foot into my stomach. No problem, right?

First thought: “That hurt a lot more than a five-week old sticking her foot into my stomach should.”

Second thought: “Maybe she kicks harder than I think.”

I told Kelly about it, who felt my stomach and immediately said, “congratulations, you’re not doing anything. You have an umbilical hernia.”

I called the primary care physician, who immediately got me a referral to see a surgeon, who luckily is also a bit of an athlete himself. The appointment with Dr. Ali was short; I was already lying down on the table when he came in. Felt the same spot, asked me to cough, and confirmed that Kelly was indeed right: I had what seemed to be a small umbilical hernia that needed to be repaired as quickly as possible so as to avoid any additional issues from arising. After chatting about running shoes for a bit, we made the appointment for surgery for Monday, October 17th, and estimating about a 45 minute procedure to repair. 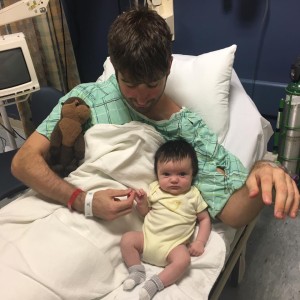 Waiting patiently to be wheeled back to the OR.

On Monday, Kelly did her best to tease me throughout the day about food and drink as my surgery was not booked until 1:30 in the afternoon. I met with my medical team and got ready to head on back. By the time I was being wheeled toward the operating room, it was 2:15. I’ll admit, it was daunting seeing the entire table of tools they had out for my procedure. Soon, though, the medicine kicked in and I was off to dream land.

I don’t wake up from anesthesia well. I cry. I don’t know why, I just do. I think part of it is that I pride myself on being able to orient myself well, and the disorientation just throws me for a loop when I don’t know where I am. I then realized the time and noticed it was significantly later than I thought it was going to be. As it turns out, the tear in the abdominal muscle was significantly larger than anticipated, requiring a larger incision to be made and more mesh to be inserted to create new abdominal tissue. After loading me up with painkillers and an ice pack, I was discharged to head on home.

Monday night and Tuesday were pretty terrible. I was a flat out disaster given the pain and trying to learn how to move without engaging my abs too much. Some of the lessons from #OopsIBrokeMySpine came into play: getting in and out of bed using my hip as a pendulum, for instance. I’m a space cadet when on Percocet as compared to Vicodin, which results in frustration when coupled with my memory struggles in the first place. Luckily, I’ve been able to cut the narcotic usage down, which is a very good thing for all involved.

I’m still not able to do much of anything here four days after surgery. Ivy is about all I’m allowed to lift. I go back on Tuesday to hopefully start be able to glue a rehab program together and get clearance to start training again. I want to be slow and sure, but I have a very full plate planned for 2017. It’s time to start getting to work.