In the last few weeks something has clicked. 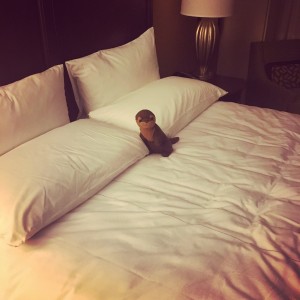 Not everything was perfect — training while in Louisville for work was difficult.

I’m training with some degree of regularity and am actually swimming, biking and running.  All three.  In the same week.  I would love to say that there’s some magic formula to getting things done, or that all I had to do was HTFU and everything fell into place, but that’s just not reality.  My ability to get training done was a combination of things — Squish being healthy and adhering (somewhat) to a schedule, work not being totally out of control, the weather co-operating to allow me to run outside with Squish, weaning myself off Domperidone, which has helped me feel more like, well, me, and being able to avoid niggling injuries (again, I think part of that was due to weaning off of Domperidone).  When I think about it, weaning off the Domperidone may have been the absolute best thing for my training (and for my outlook on pretty much everything).  As much as publications like Runner’s World would have you believe “no time” is a myth, they’re full of it.  No time happens all the time, and getting the stars to align to allow for consistent training and racing is a feat worthy of note. 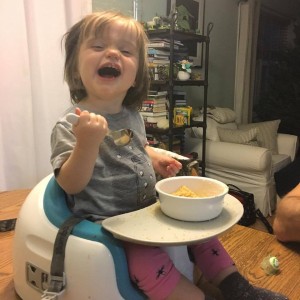 Sometimes Squish dictates that nothing gets done.

Getting in training regularly also means that I’ve been able to check off one of my goals for the end of 2017.  Both Ryan and I ran the Great Turkey Escape on Thanksgiving Day.  Ryan ran a respectable 21:52 on a very hill course.  Pushing Squish I ran a 34:38.  While that won’t break any records or garner any age group awards, it was 2:30 faster than my time of 37:09 in 2016.  Plus with this go around, Squish was about 10 lbs heavier than she was in 2016. Squish and I will be running together again at the Glastonbury Santa Run on December 3rd and then the big test is on January 1st when I see if I can set of post-partum 5K PR.  29:34 may not be especially fast in the grand scheme of things, but its a number with a lot of meaning for me. 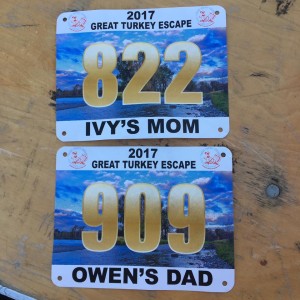 Our bibs for the Great Turkey Escape. Ryan ran fast and I did better than last year.

I’m also starting to think seriously about whether or not I’m finally coach-able again.  This past July I stopped working with a coach because I wasn’t holding up my end of the bargain.  I wasn’t communicating well, I was pretty much ignoring the workouts and I didn’t have the motivation or where with all to even attempt to be better.  I was in a vicious cycle of not doing the work so I felt out of shape and then feeling really out of shape so the work just seemed way too daunting. I took some time of doing absolutely nothing, I raced an Olympic Tri on zero training with not horrible results, dealt with a bunch of sickness for both me and Squish and finally came around to training regularly again.  I have to say the biggest kick starter for getting things going was a regular swim date.  I’m now at the point where I think maybe I can listen and communicate and benefit from an outside perspective and guidance.  The Patriot Half Triathlon is on June 16, 2018.  20 weeks is a good chunk of time to specifically prepare for a race of that distance.  So I’m giving myself until January 15, 2018 to determine whether I’m in a spot mentally and physically to benefit from working with a coach.  Right now I think the answer will be yes, but I want to see if I can sustain what I’ve built over the last several weeks. 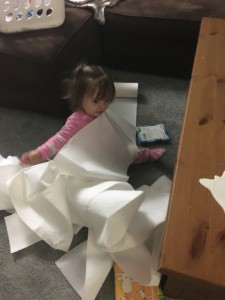 Squish entertaining herself while I was on the trainer.